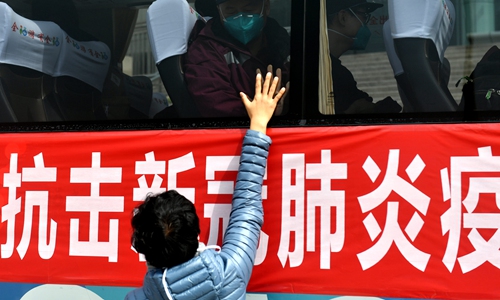 A woman says goodbye to a family member, who is one of the 158 medical staff leaving for Yichang, Central China's Hubei Province, from Fuzhou, East China's Fujian Province, on Tuesday to support the fight against the novel coronavirus. (Photo: cnsphoto)

Chinese policymakers are displaying a clear and sober mind in organizing companies to resume work amid the outbreak of novel coronavirus pneumonia (NCP), with priorities identified and a slew of support measures underway.

But the ongoing battle to contain the epidemic and an urgent need to rapidly restore normalcy and the country's manufacturing capacity after an extended Spring Festival holidays is still a hard test for the governance of all levels of government in the following weeks.

At a press conference in Beijing on Tuesday, senior officials from China's top economic planning agency, human resources department and transport ministry unveiled a clear roadmap on how they will organize the work resumption in the world's second largest economy in the following weeks, and address most enterprises' concerns, which are striving to resume work during this critical time.

Thus far, Chinese enterprises, except for those in Central China's Hubei Province, are gradually resuming work and production, particularly in key areas such as medical supplies, energy, food, transportation and logistics, Cong Liang, an official of the National Development and Reform Commission (NDRC), China's economic planner, told the press briefing on Tuesday.

Cong pointed out that different regions do not have to resume work at the same time. Different regions should arrange work resumption in an orderly but flexible manner based on NCP prevention and control. "Medical and other necessary industries should resume work first, and other sectors could 'wait a while,'" Cong said.

While stressing the importance of containing the virus, officials also warned local authorities not to adopt a simple and harsh measure to prevent firms from restarting production, and the central government will strictly crack down on that.

Xu Yahua, an official at the Ministry of Transport, also vowed to gradually restore land transportation services, noting that as of Monday, inter-provincial and inter-city land transport in provinces such as South China's Guangdong has gradually resumed operations, which paves the way for many workers to return to work.

The comments came after some places issued strict measures to restrict the entry and exit of personnel, including traffic blocks, adopting a report system for the resumption of production or even detaining those who resumed production earlier.

"China will strictly crack down on moves to ban enterprises from returning to work and production through simple and crude ways such as setting approval conditions," said Ou Xiaoli, a senior NDRC official.

Wang Hongyuan, owner of an electronics firm in a city in East China's Jiangsu Province, told the Global Times on Tuesday that though his company has enough masks in stock, he still had to go through a long process before being allowed to restart production, including a place prepared for isolation if infection case is found.

Wang failed to restart production as scheduled on Monday, while noting that the guideline from the central government gives him hope that his factory could get the approval as soon as this week.

The Ministry of Industry and Information Technology said on Tuesday that it will encourage enterprises to restart work by clusters, including promoting work resumption in some key industries to push the supply chain back to full production as soon as possible.

The move is also a targeted solution to address many foreign enterprises' concerns that the virus might disrupt some key supply chains in the world's manufacturing base.

Many foreign automakers have delayed their work resumption date. BMW said the resumption date of its factory in China will be rescheduled to February 17.

A supplier of German carmaker Volkswagen told the Global Times on Tuesday it has been discussing with clients a possible delay in orders supply, as only a few upstream and downstream firms have restarted production. "We hope follow-up promotion measures could come out soon," said the owner of the firm, who asked to remain anonymous.

Analysts said that these measures, which showed the central government's detailed research into enterprises, are a clear and scientific guide for governments at all levels to carry out further work, but noted it's still a test for local governments' management ability as work resumption in China amid the NCP outbreak involves returning workers and cross-region personnel migration.

They also warned that complicated work is not an excuse for local governments to adopt a one-size-fits-all approach.

"It is not easy to balance production resumption and controlling the epidemic. But the tough mission is the local authorities' responsibility. It is a test on their governing, learning and services ability. It is a war they must win," Cong Yi, a professor at the Tianjin University of Finance and Economics, told the Global Times on Tuesday.

"A more urgent move at present is to convert supportive fiscal and financial policies of the central government to practical measures," Cong said, suggesting that a supervisory body should also be set up to examine the implementation.

A number of cities across the country, including Beijing, Shanghai, Suzhou in East China's Jiangsu Province and Qingdao in East China's Shangdong Province, have issued support measures to local industries following the central government's call.

The municipality of Beijing, for instance, has promised to enhance financial support, such as loans to firms that face temporary difficulties. Shanghai has rolled out 28 measures to help companies against the impact of the NCP.

"They also need to learn how to release information and communicate with the public," Cong said.

Thus far, key industries of China are gradually returning to normal, and others are just a matter of time, analysts said.

About 76 percent of factories that make masks have already resumed operations, while about 77 percent of firms making protective suits have restarted work. Also, 94.6 percent of grain production and processing firms have resumed production, and 57.8 percent of coal miners have resumed work, according to figures released during the briefing on Tuesday.