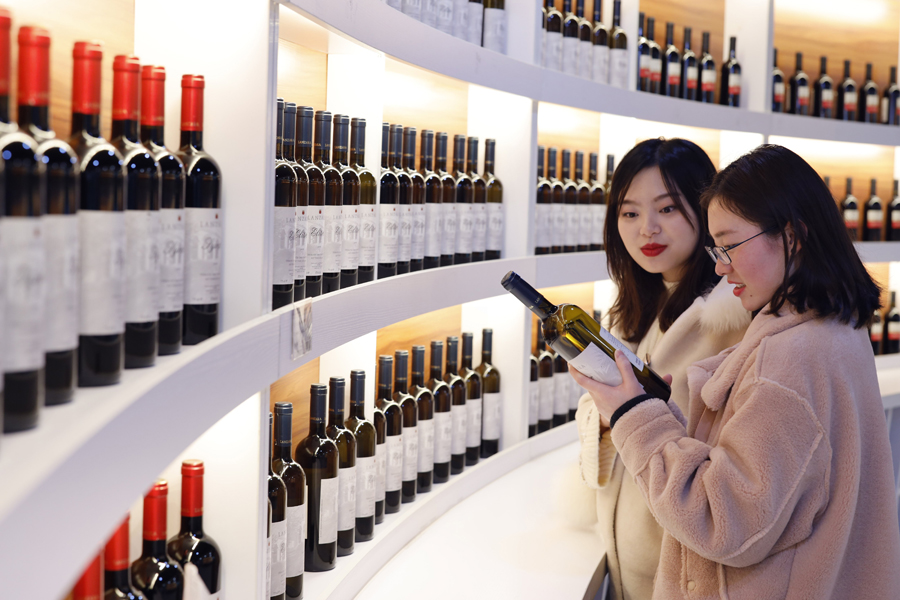 According to the 2019 Fine Wine Investment Report released by Cult Wines in late July, the LIV 1000 index, a gauge widely recognized by domestic and foreign investors, had seen an annualized return rate of 6.9 percent from 2008 to 2018.

During the same period, the CSI 300 index, which is a tracker of major stocks listed on Shanghai and Shenzhen exchanges, reported an annualized return rate of only 3.2 percent.

During the 2008 global financial crisis and the China-US trade conflict over the past few years, wine investment has shown the most significant advantage in terms of diversifying risks, even better than gold investment. It can be largely attributed to its negative correlation to the stock market performance, according to the report.

The report said if a Chinese investor has parked 40 percent of his investment in stocks, 30 percent in cash and 30 percent in wine, he would have received the highest 5.2-percent annualized return rate from July 2016 to June 2019.

The risk incurred in this portfolio comes at a median level, with the risk rate registered at 6.65 percent, lower than the model which substitutes wine with gold.

Tom Gearing, managing director of Cult Wines, said that fine wine investment is an attractive and sustainable option for investors who are looking to expand their investment portfolios or diversify their global asset allocation.

When the global economy shows signs of contraction or declining, fine wines can play a defensive role in hedging against market risks to a certain extent. During economic booms, fine wine investment continues to report stable profit, buoyed by investor demand for luxury goods as their wealth increases, he explained.

Dan Siebers, associate director for Cult Wines in China, said that the average liquidation period of fine wines comes between eight and 12 weeks. He suggested Chinese clients should allocate no more than 20 percent of their investment to fine wines.

The wines should be stored in bonded warehouses in London or Hong Kong. Otherwise, investors will lose about 40 percent of the value due to the tariffs and expenses once their wine enters the Chinese mainland market, he said.

Founded in London in 2007, Cult Wines sees its current assets under management exceed 100 million pounds ($122 million). After opening its offices in Singapore and Hong Kong, the company opened its Shanghai office in late July to better cater to the rising demand of the Chinese market.

This is probably the most ideal timing for Cult Wines to step into the Chinese market. While jewelry, luxury watches, ancient calligraphy, and paintings used to be the major four collection items among the Chinese high net worth individuals, vintage wines have won their hearts this year, to become the No 1 collection item, according to the Hurun Research Institute, the Shanghai-based consultancy that logs the changes among the Chinese super-rich. This is the first time that fine wines have overtaken all the other monitored alternative investments.

The recommended minimum is 50,000 pounds to invest in a diversified portfolio of wines across different regions and vintages, but the average portfolio size among Asian investors is significantly higher than the minimum threshold said the company's global sales director Aarash Ghatineh.

While the majority 53 percent of Cult Wines' clients are in the United Kingdom, and 26 percent are in Asia.

In the Western parts, Cult Wines' clients are predominantly male accountants, lawyers and financial professionals aged between 40 and 60. But in China, the major clients are younger, aged between 27 and 40. Most of them are from industries like education, engineering, finance and medicine, said Ghatineh.

What is more, more than half of the company's Chinese clients are younger females who have educational background in North America and Europe, said Patrick Thornton-Smith, deputy chairman of Cult Wines.

Cult Wines' findings to some extent echo the insights from Hurun. As the younger consumers born in the 1980s and 1990s grow into the major consumers of fine wines, female consumers are rising so rapidly that their purchasing and interest in wines cannot be overlooked, according to Hurun's China High-net-worth-individuals Alcohol Consumption Report 2019 released in late March.