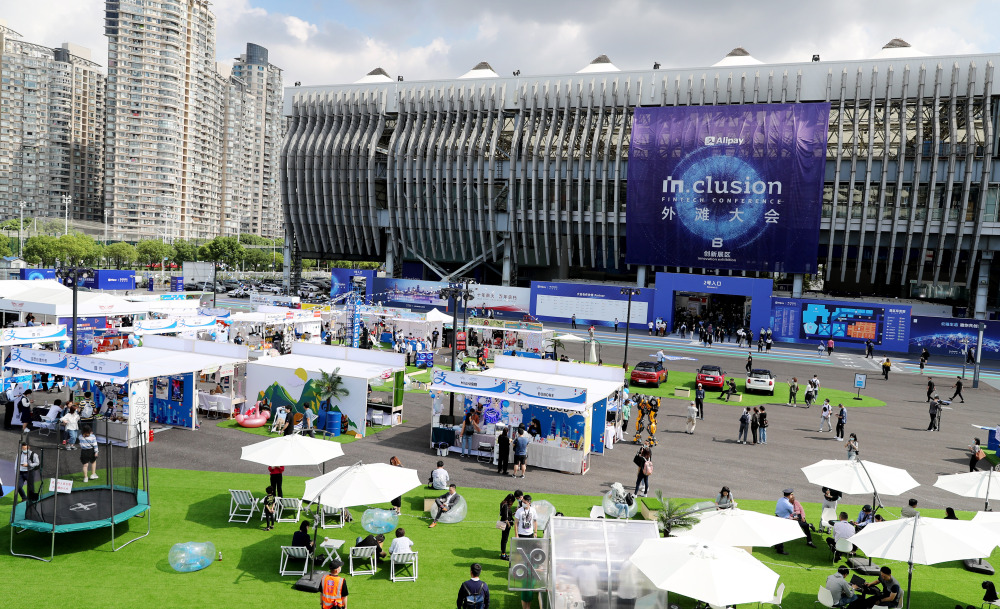 As INCLUSION Fintech Conference held from September 24 to 26 focused on major themes including the global digital economy, innovative technology and digital finance, Shanghai, the city hosting the Conference, has been on track to achieving its target of becoming an international finance center as well as technology innovation center.

On the INCLUSION Fintech Conference, Jing Xiandong, the chairman of Ant Group said in his speech that charactered with openness and innovation, Shanghai is the most competitive city in China to become a fintech center.

Backed by China's dynamic economy and favorable policies, Shanghai has always been at the forefront of China's reform and opening-up, and has been on track to achieving its target of becoming an international finance center.

During recent years, fintech has been reshaping the global financial services industry. Shanghai speeds up to establish itself as a global fintech center to integrate finance and technology, covering business digital transformation and the adoption of AI investment and blockchain.

According to the city's action plan released earlier this year, Shanghai will foster 20 top financial technology companies with international recognition and influence in the next five years and to attract around 20 financial institutions with cutting-edge fintech capabilities.

Zheng Yunqing, Head of Securities Analytics, UBS China Business Solution Center said that fintech is crucial for Shanghai’s sophistication as a financial center to become more internationally competitive. “At present, Shanghai’s financial infrastructure construction is becoming more and more mature. Now that innovation has become the city's brand, Shanghai has the momentum to enhance its position as an international financial center through investment in fintech,” Zheng said.

“Compared with other established international financial centers, fintech will be the opportunity for Shanghai.” Traditional financial industry may run faster in the western world, however, when it comes to fintech industry, China is no less advanced.

Cai Mingpo, Founder and President of Cathay Capital, a global investment platform, noticed that some of the world’s largest fintech companies were born in China and have been able to expand around the world, creating innovative business models and technologies that have helped providing access to financial services to large populations, in China and elsewhere.

“China has been leading the global fintech transformation and Shanghai has nurtured some of the most innovative players in the fintech world,” Cai said. “Its rich ecosystem of financial institutions, combined with a new generation of entrepreneurs and innovators with bold ideas in fintech, have made Shanghai the tip of the spear of the global fintech revolution.”

For financial institutions in Shanghai, they take an open stance for technology breakthroughs and using fintech to empower related businesses.

At the Blockchain Industry Summit of the INCLUSION Fintech Conference, Standard Chartered announced that it has completed its first cross border live transaction on the Trusple platform of AntChain, a digital international trade and financial service platform.

Through the integration of its financial services with Trusple, Standard Chartered can offer buyers and sellers, typically small and medium-sized enterprises, improved access to trade finance.

Xu Tianwei, Managing Director, Digital Banking & Partnership, Greater China and North Asia of Standard Chartered, said that Shanghai has a full range of financial institutions and tech players around the world and Shanghai welcomes the companies to apply for trial projects and complement each other through cross-border cooperation.

Richard Li, Executive Vice President and Head of Wealth and Personal Banking, HSBC China, believed that the accelerated integration of financial industry and technology will be the source of innovation and improve customer service, risk management, and investment consulting.

“Through a series of further steps, Shanghai will build on its inherent strengths as an open and well-connected financial hub with a track record of embracing innovation, to capitalize on new opportunities powered by fintech and enhance its standing as a global financial center.” Li said.