BUSINESS First charter flight from US arrives in Beijing

First charter flight from US arrives in Beijing 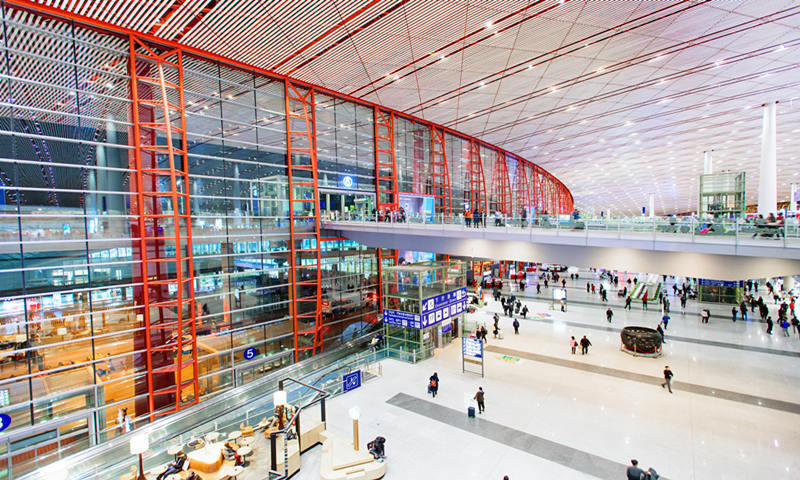 The first US charter flight to Beijing since the start of the COVID-19 outbreak and China moved to close its borders arrived on Sunday, the American Chamber of Commerce in China announced on its Twitter account.

With 87 passengers, including crucial support staff such as teachers and company executives, the plane flew from San Francisco to Beijing, according to the chamber. The flight was the first US multi-company chartered flight to fly from outside China into Beijing.

A person familiar with the issue told the Global Times on Sunday that the past few days were "hectic" with many details to coordinate, but the arrival of the charter flight was ground-breaking. The person asked to remain anonymous.

In a telephone interview with the AmCham on Monday, a staffer said that the chamber is busy working on epidemic prevention and declined to disclose any other details on the chartered flight.

The passengers, who ranged in age from a newborn to an 81-year-old, took off at 9 am local time on Saturday for a 10.5-hour flight to Narita International Airport in Tokyo, where they stayed on board during a crew change. The same aircraft completed the final leg of the journey and arrived at Beijing International Capital Airport at 3:09 pm on Sunday, read a press release of the AmCham China on Monday.

After a health check and an efficient customs process, the passengers were transported in seven buses to a designated hotel in Beijing, where they will be placed under quarantine for two weeks, according to Beijing regulations on COVID-19 prevention and control. The Beijing municipal government confirmed that all passengers tested negative for COVID-19, said AmCham China.

"We are thrilled to support so many members' journey back to China, so that they can resume their work and lives here," commented AmCham China President Alan Beebe on Monday.

The chamber also said it hopes all remaining members can return to China as soon as possible. It previously stated that at least 5,000 to 6,000 people in the broader business community remain stranded outside the country, and up to 10,000 people with plans to return to China have been unable to do so.

A staffer at the AmCham Northeast China told the Global Times on Monday that US teachers at the Dalian American International School were not on the charter flight. But the school has brought back some teachers from the US to Dalian, Northeast China's Liaoning Province through Guangzhou, Guangdong Province.

Employees of members of AmCham China who work in Beijing were eligible to take the chartered flight in September. They were also required to have an invitation letter from the Beijing local government, said the chamber.

The Global Times learned that the Beijing municipal government offered support for the charter flight as it provided preliminary approval for AmCham China's "Back to Work" charter flight on August 14.

The chartered flight with fares costing from $3,000 to $5,000, was initially planned for August 28 but was delayed to September 12, giving it more time to ensure that all passengers could obtain visas and take pre-departure COVID-19 tests, according to AmCham China.

Nearly 200 people signed up for the flight, but the requirements were very strict and some weren't eligible, according to information previously provided by AmCham China to the Global Times.

Against the background of declining China-US bilateral trade amid Trump administration's trade wars, most US companies in China have no plans to relocate production abroad, and nearly 40 percent of the surveyed firms planned to maintain or increase investments in Chinese market, according to AmCham China. 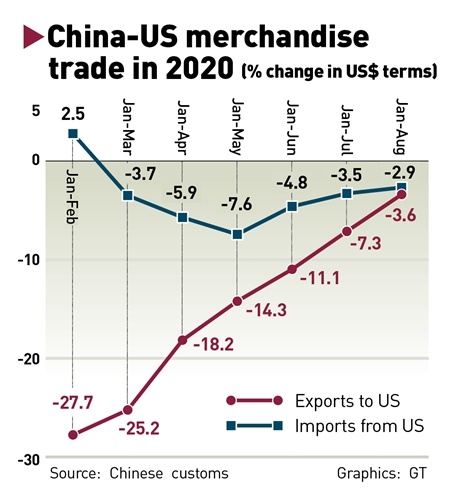 China's trade with the US, its third-largest trading partner with a 12.1 percent share of total trade, was 2.42 trillion yuan ($354.3 billion) from January to August, down 0.4 percent on a yearly basis, according to the General Administration of Customs.

Liu Xuezhi, a macroeconomics expert at the Bank of Communications, told the Global Times there is a risk that the trade friction could escalate, so China needs to anticipate and deal with the risks in advance.