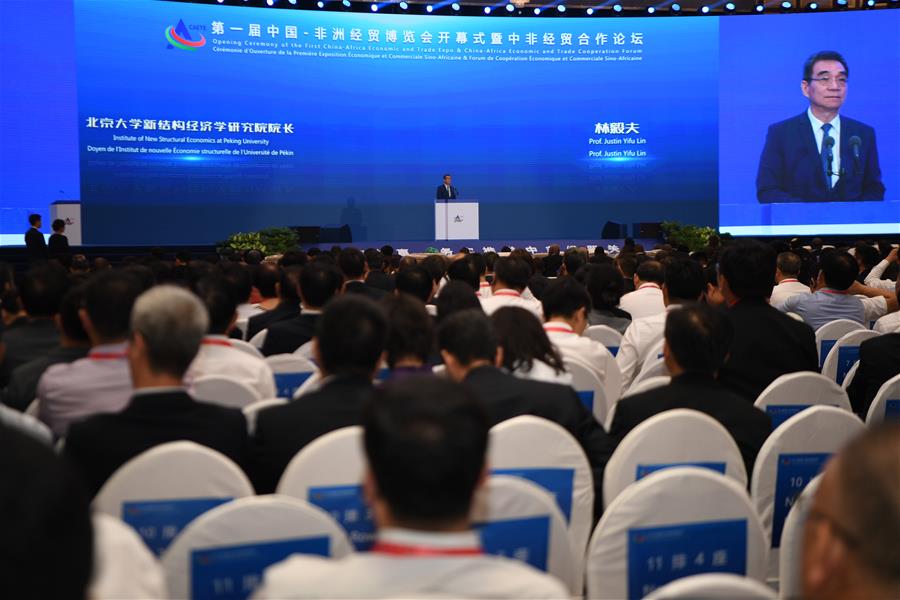 The three-day event has attracted more than 10,000 guests and traders, including those from 53 African countries, according to the organizing committee.

The expo, announced at the Beijing Summit of the Forum on China-Africa Cooperation (FOCAC) last September, was established to provide a platform for deepening economic and trade cooperation between the two sides, he stressed.

It is hoped that the two sides will strengthen coordination to better implement the eight major initiatives put forward at the Beijing summit of the FOCAC, actively explore new paths for cooperation, open up new points of growth for collaboration, and promote China-Africa economic and trade cooperation to a new level, Xi said.

"Industrial development and free trade amongst ourselves will foster faster growth for our mutual benefit," said Ugandan President Yoweri Museveni at the opening ceremony. "This Forum should, among others, enable us to devise ways of turning these rays of hope into a reality."

Hailing the long-term friendship with Africa, Chinese Vice Commerce Minister Qian Keming said at the expo that bilateral trade and economic cooperation should be practical and concrete to meet the development needs of African countries in areas such as infrastructure and talent cultivation.

According to Assome Aminata Diatta, Senegal's Minister of Trade and SMEs, China is an ideal partner for Africa to improve its capacity building when China is seeking higher-quality growth driven by innovation.

Bringing modern production lines to Africa, especially in the special economic zones, will likely provide tens of millions of jobs for Africa, accelerate its industrialization and improve the trade structure between China and Africa, Diatta said.

China has set a good example for other developing countries, especially those in Africa which, having a lot in common with China, may benefit from mutual complementarity in the area of development, said Justin Yifu Lin, former senior vice president and chief economist at the World Bank.

The experience, wisdom and programs that China will offer are very good reference for African countries that are now eager to work themselves out of poverty and pursue development, Lin said.

After the opening ceremony, 13 cooperation projects involving eight African countries were signed, worth a total of more than 2.5 billion US dollars.

Conferences, seminars, forums and exhibitions focusing on agriculture, trade, investment and infrastructure construction will be held during the expo, with experts sharing views on closer bilateral exchanges.

The expo will feature exhibition areas covering more than 40,000 square meters, including national pavilions and display areas for enterprises that showcase the achievements and opportunities of China-Africa economic and trade cooperation.

With the theme "Win-Win Cooperation for Closer China-Africa Economic Partnership," the expo, which will become a biennial event, will open a new chapter in the history of bilateral trade.

"Nigeria has a lot of non-oil products of high quality and we want China to buy more," Uduak M. Etokowoh, an official with the Nigerian Export Promotion Council, told Xinhua.

Nigerian gemstones, Namibian oysters, Kenyan coffee and tea as well as South African wine are attracting many Chinese visitors at the expo.

"We used to export leather materials to Italy and Spain, who now have a wobbling economy," said Nigerian businessman Mustapha Tijjani Garo. "We are now looking east for the market."

China has been the largest trading partner of Africa for ten consecutive years. In 2018, trade volume between China and Africa amounted to 204.2 billion US dollars, up 20 percent year on year.

For Chinese businessmen, with mounting pressure on labor-intensive industries as cost is surging and industrial upgrading is urgently needed, Africa is a great destination.

"Africa has strong demand," said Wang, who is selling seeders, tractors and harvesters in the west African country.

"The output is expected to reach 2 billion yuan (291 million US dollars) within 5 years," said Wang, adding that the company has been working hard for survival in the past three years.

The transfer of labor-intensive industries from China can also give a strong push to Africa's industrialization and modernization. It will expedite the economic take-off of Africa in the same way as how the industrial transfer had benefited China, Justin Yifu Lin said.

With abundant resources, a large population and a vast market, Africa is still the poorest continent and falls behind in the overall context of development and is battling poverty and hunger.

For 11 years, paddy land has been Hu Yuefang's battlefield in Madagascar to fight against poverty.

"Madagascar can reach the self-sufficiency in rice as long as 15 percent of its rice planting area belongs to hybrid varieties," Hu Yuefang said, adding that the average yield of hybrid rice produced by Chinese technologies in Africa is two to three times more than that of local ones.

Buried in the field all day, the 61-year-old agriculture expert from Yuan Longping High-tech Agriculture Co. Ltd. (LPHT) has been on the frontier of closer agriculture cooperation between the two sides.

He said though he could not come to the scene, he expected fruitful results from the inaugural expo to help tackle challenges and bring shared benefits to China and Africa.

China took deliberate steps using the agriculture sector to transform its economy by setting up favorable agricultural policies, the experience of which can be learned by us to accelerate our development, according to Ugandan Minister of Agriculture Vincent Bamulangaki Ssempijja at the expo.

"We strongly believe that by working together with our Chinese friends through joint venture businesses, investment arrangements and win-win cooperation, the majority of African countries can quickly eradicate poverty," he said.

Hunger has long been bothering African countries. To help relieve the grain shortage, Chinese agricultural enterprises and experts, like Yuan, have been devoted to the continent for years, sharing China's wisdom and experience.

"We put red flags on the map to show our steps in promoting hybrid rice in Africa in recent years, which have covered nearly 20 countries in southeastern, western and northern parts of the continent," said Yao Zhenqiu, LPHT's deputy general manager.

So far, Chinese experts and technicians have carried out more than 300 small-scale projects in nine African countries, promoted 450 agricultural technologies, and trained nearly 30,000 local farmers and technicians, according to Ma Youxiang, an official with China's Ministry of Agriculture and Rural Affairs, at the expo.

"We will continue to send high-level agricultural experts and vocational education teachers to African countries, to further expand training in Africa and help cultivate more talent in agriculture," he said.

The World Food Programme (WFP), the food assistance branch of the United Nations, is also taking the expo as an opportunity to meet Chinese business society to tackle food problems in Africa.