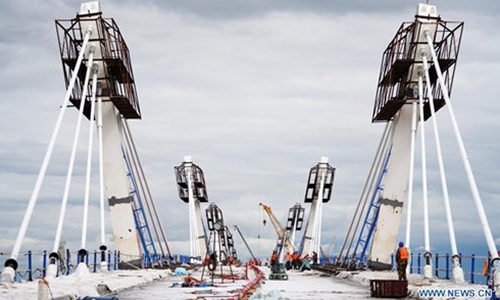 Workers work at the construction site of the first highway bridge connecting China and Russia across the Heilongjiang River, on August 19, 2019. (Photo: Xinhua)

The Blagoveshchensk-Heihe highway bridge, the first highway bridge connecting China and Russia across the Heilongjiang River, is ready to open to traffic, China's Ministry of Commerce (MOFCOM) said on Thursday, marking the completion of another key cross-border infrastructure project that could pave the way for a closer economic bond between the two countries.

The port facility of the Blagoveshchensk-Heihe highway bridge passed inspection on Friday, according to local authorities in Heihe, a border city in Northeast China's Heilongjiang Province. The facility will operate full year to serve both passengers and freight.

Measuring 1,284 meters long and 14.5 meters wide, the bridge across the Heilongjiang River, known in Russia as the Amur River, stretches from Heihe to the Russian city of Blagoveshchensk.

The bridge will be officially open after the exchange of documents between China and Russia, and the port will further promote China-Russian economic and trade cooperation and regional connectivity, said local authorities.

"The long-awaited highway bridge will serve as a supplement to the existing rail link with Russia via Northeast China's ports of Manzhouli and Suifenhe, facilitating trade cooperation between Northeast China and the Russian Far East," said Zhang Hong, an Eastern European studies expert at the Chinese Academy of Social Sciences.

China and Russia have achieved deep cooperation in the exploration, processing and transporting of energy. In December 2020, Russia approved China Petroleum & Chemical Corp's participation in the Amur Gas Chemical Complex in the Russian Far East, as China - a major global consumer of polymer - is a target market for the project.

Zhang said that it may not take much longer before the bridge and related port facility go into service, as the Russian side expects to deepen economic cooperation with China in the post-COVID-19 era.

Apart from the bridge, many key cross-border infrastructure projects that aim to boost bilateral connectivity are completed or near completion.

China and Russia are also actively exploring cooperation in the fields of oil and gas chemicals, mineral resources, as well as green, low-carbon, and hydrogen energy, MOFCOM spokesperson Shu Jueting said at a press conference held in Beijing on Thursday.

Economic and trade cooperation between China and the Russian Far East started early, with a good foundation and great potential, said the official.

According to Russian official data, in the first half of 2021, the value of trade between the Russian Far East and China was $5.82 billion, a year-on-year increase of 24 percent. China maintained its position as the largest trading partner and largest source of foreign capital in the Russian Far East.