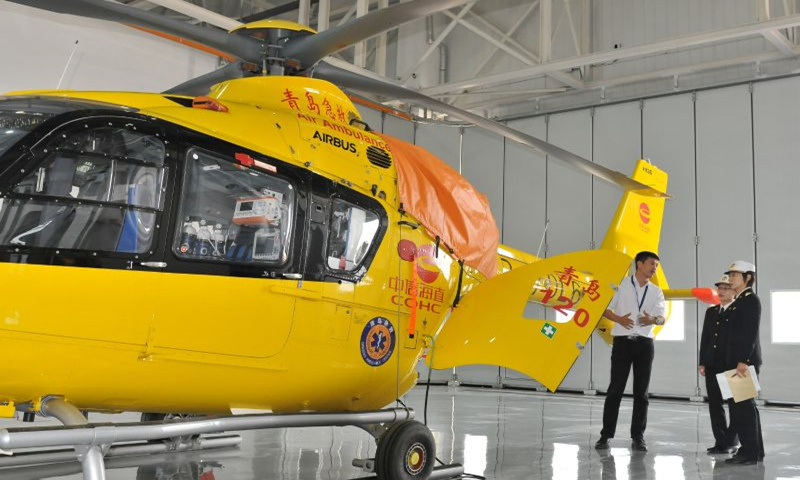 An Airbus H135 helicopter by Airbus Helicopter (Qingdao) Co rolled off assembly line on October 21 in Qingdao, East China's Shandong Province, making it the first domestically made Airbus H135, after having succeeded in test flights, and will be delivered soon.

It will serve the Shandong aerial medical emergency rescue system, according to the Customs of Qingdao.

The designed annual capacity is 36 aircrafts, the People's Daily reported. Ninety-five percent of the H135s destined for the Chinese market will roll off the Airbus Qingdao H135 Final Assembly Line (FAL), many configured for EMS operations, according to a press release of Airbus in 2019.

As helicopter is a special product, Qingdao Customs, in accordance with policies and laws, has exempted the processing trade deposit for the enterprise. Each helicopter can thus save more than 8 million yuan ($1.19 million), said the Qingdao Customs.

"China is the most promising helicopter market in the world. That is the best way for Airbus to address our continued commitment and determination to deepen the cooperation with Chinese partners," the Xinhua News Agency reported, citing Marie-Agnes Veve, general manager of Airbus Helicopters China.

The helicopter assembly line was a cooperation project signed by Qingdao government and Airbus Helicopters, witnessed by the Chinese Premier and German Chancellor in October 2015.