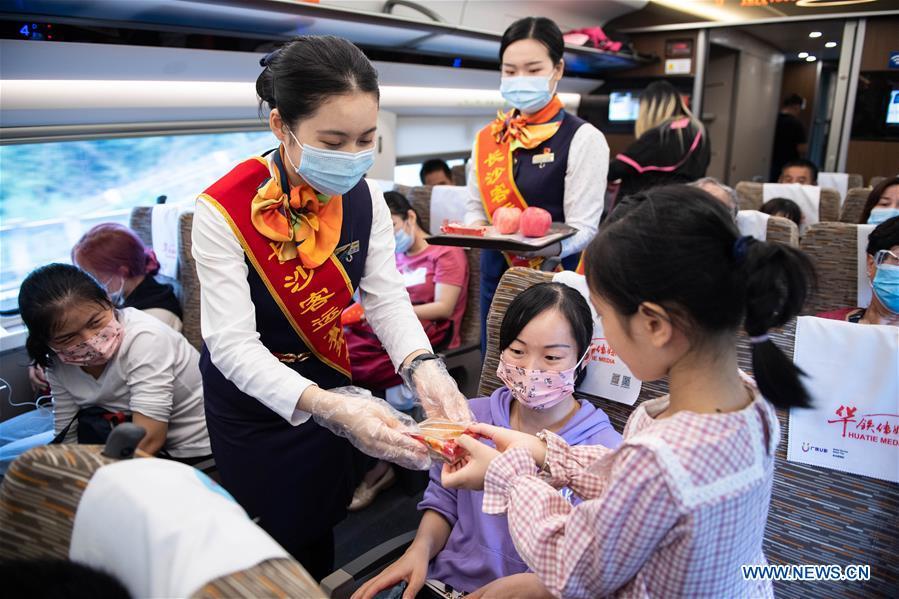 A train attendant hands out a mooncake to a passenger to celebrate the National Day and the Mid-Autumn Festival on Fuxing bullet train G6131 from Yueyang in Central China's Hunan province to Guangzhou in South China's Guangdong province, Oct 1, 2020. (Photo: Xinhua)

BEIJING -- As China's first National Day holiday since the outbreak of COVID-19 epidemic witnessed a heightened public willingness to travel, the potential of domestic demand continued to be unleashed, serving as an important force for sustaining the economic recovery.

Among all industries, tourism is regarded as among the first to be affected by COVID-19 and the last to recover. Given this prognosis, its momentum is a good indicator of the country's recovery from the epidemic.

China saw 425 million domestic tourist visits in the first four days of the eight-day holiday that consists of the Golden Week and the Mid-Autumn Festival starting from Thursday, with total tourism revenue hitting 312 billion yuan ($45.8 billion). Consumption at tourist attractions nationwide during the holiday is expected to rebound to around 90 percent of that in the same period last year, according to an earlier report issued by the Meituan Research Institute.

As the tourism industry is closely related to many service sectors such as catering and transportation, the tourism boom will be conducive for the recovery of the service industry and promote more balanced economic development.

However, challenges posed by mounting external uncertainties and the impact of the epidemic still persist amid the economic recovery. There is no excuse to let the guard down. To strike a balance between epidemic control and economic and social development, tourist attractions across the country have been required to cap their visitor flows at 75 percent of full capacity. They were also encouraged to adopt reservation-only or staggered admission policies.

China has recently vowed to establish a "dual circulation" development pattern, in which domestic and foreign markets complement and reinforce each another, with the domestic market as the mainstay, aiming to build up resilience with better domestic development and wider opening up against headwinds in the external environment. The country's enormous market is pivotal to this development pattern, with the booming "holiday economy" being a manifestation of the strategy.

As the flourishing consumption market will drive imports and investment from other countries, China's economic vitality can also offer a strong boost to global trade and the world economy.

According to a recent report from the World Bank, China's economy is expected to grow by 2 percent in 2020, up from the 1-percent growth projection released in June.

China will continue to be one of the main engines of world economic growth. If other countries can seize the opportunities presented by China's economic bounce, it will help accelerate the recovery of the world economy.