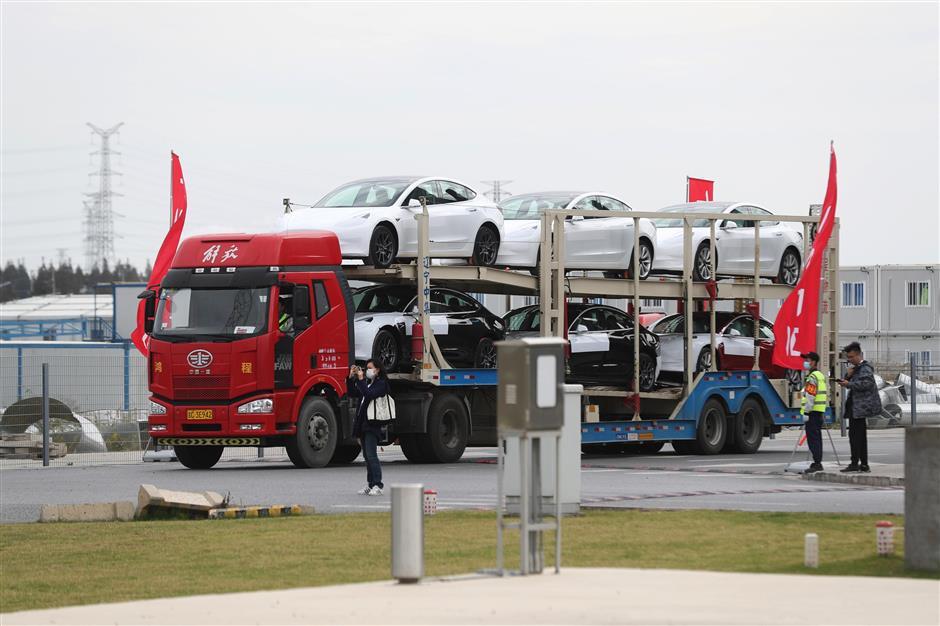 Tesla Model 3 cars made at Tesla's Gigafactory in Shanghai are transported to port to be sold in European market on October 26, 2020, in Shanghai. (Photo: Agencies)

Concluding a month-long journey, the first-ever transport of China-made Tesla Model 3 cars to be sold in the European market reached the port of Zeebrugge in Belgium late on Thursday.

Vincent De Saedeleer, vice president of Zeebrugge port, a natural deepwater harbor with a broad network of road and rail connections across Europe, said the port has seen shortsea trade shrinking as the industry in Europe is affected by the COVID-19 pandemic. However, shipping connections between Europe and Asia operate fully loaded as industries in China run at close to full capacity.

"Our aim is to operate as a hub for China in northwest Europe," said Saedeleer.

Some 7,000 sedans manufactured in Tesla's Gigafactory in Shanghai, China are destined for Europe in two shipments. The first batch of about 3,600 has arrived. The second shipment is scheduled to reach Europe in early December, Xinhua has learned.

The electric vehicles will then be shipped on to Germany, France, Italy, Spain, Portugal and Switzerland for sale.

Tao Lin, vice president at Tesla, told Xinhua that the US carmaker has gained confidence in China after the country succeeded in overcoming the pandemic and has pulled ahead in economic recovery.

"China has a particularly advanced digital infrastructure, which in many cases helps companies increase their 'resilience' amid the pandemic," Tao noted, adding that Tesla's Shanghai plant has shared its effective experience in COVID-19 prevention with the company's other plants worldwide by sharing the so-called "China book," a guidebook for epidemic prevention.

Calling it a "milestone" for Tesla's Shanghai Gigafactory, Tao said the export of China-made Tesla cars will continue as the plant further expands its production capacity.

She noted that the design of the Gigafactory in Shanghai is fully in line with international standards, which ensures that its products can satisfy diversified consumer needs all over the world.

The Shanghai plant had churned out more than 85,000 vehicles worth over 21.6 billion yuan (US$3.3 billion) by the end of September, with its weekly production stabilizing at 3,500 to 4,000 vehicles. The value of vehicles and batteries exported from the plant is estimated to reach US$450 million within a year.

Earlier this year, Tesla delivered the first batch of China-made Model 3 sedans to the public, one year after the company broke ground on its first overseas plant.

"The Model Y is a highly anticipated product that will be delivered to Chinese consumers in the first half of next year," Tao said.

Tesla China announced on Friday plans to build a supercharger manufacturing factory in Shanghai, which is expected to be operational in the first quarter of 2021.

With a planned investment of 42 million yuan, the plant will produce 10,000 superchargers annually, mainly the V3 model, at the initial stage. The company claims that a V3 supercharger can add 250 km of range by charging for 15 minutes.

Currently, Tesla's superchargers used in China are all imported from the United States.