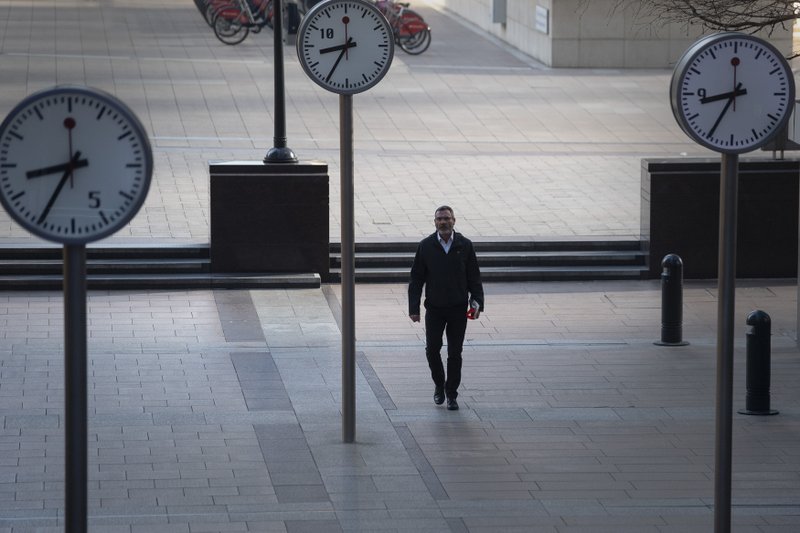 The outbreak of the coronavirus has dealt a shock to the global economy with unprecedented speed as it continues to spread across the world. Here is a look at some of the latest developments Wednesday related to the global economy, particular economic sectors, and the workplace:

HOUSING: Economists have been waiting for the first signs of virus-related disruptions in housing with the expectation that they will be seismic. Federal housing data looks further back for trends, meaning there is a lag in real world activity. But details have begun to emerge in private surveys.

On Wednesday, the Mortgage Bankers Association reported that mortgage applications plunged 29.4% last week. People trying to sell homes have cancelled showings during the outbreak and because closings are done in person, economists expect sales will decline sharply. But the virus has affected the market in other, unforeseen ways as well.

Despite additional cuts to benchmark interest rates by the U.S. Federal Reserve, mortgage rates have actually been rising.

Joel Kan, MBA’s Associate Vice President of Economic and Industry Forecasting, said that’s partially because lenders amid the outbreak are wrestling with capacity issues, backlogs in the pipeline, and the challenge of working remotely in real estate.

While mortgage applications fall, refinancing, which can be done from home, is soaring. Lending Tree says the economic effects of the virus outbreak have led to unprecedented volatility in mortgage interest rates and an overwhelming surge of borrower demand. The company’s data shows that refinance mortgage applications through its marketplace tripled from a year ago in each of the 50 largest cities and in all but five states. In San Francisco, refinance loan requests skyrocketed 417%.

RETAIL: Local groceries and other mom-and-pop shops have become a lifeline for millions of people ordered by states or cities to shelter at home. Major retailers are another, and the impact of the virus has reordered priorities.

Target has been aggressively remodeling and opening new stores as competition from Amazon.com grows increasingly intense. On Wednesday, it significantly rolled back those plans. Target said it will remodel 130 stores this year, less than half of 300 it has planned. It will open only 15 to 20 smaller format stores this year, down from the 36 it had hoped to. It will also push back plans to incorporate fresh food and alcohol in its online pickup service.

The Minneapolis company warned Wednesday that it is absorbing rising costs, including higher pay for workers. Target expects an additional $300 million in costs this quarter from a $2 bump in hourly pay, and increased investments in online operations. The company withdrew its annual and quarterly financial guidance and suspended its share repurchase program to raise much-needed cash.

Fast food chains are offering another lifeline, but at a cost. The owner of Pizza Hut, KFC and Taco Bell said in a regulatory filing that 7,000 of its restaurants worldwide are closed, including over 1,000 Pizza Hut Express locations in the U.S. and over 900 KFCs in the U.K.

Yum said because the situation is ongoing and the duration and severity are unclear, it’s difficult to forecast results. It expects COVID-19 to impact its same-store sales for the quarter ended June 30 more significantly than in the current quarter due to the increasing number of markets currently impacted.

TECH: Attorneys general from 33 states are asking online sales and retail companies to aggressively monitor price gouging by third-party sellers on their websites.

Consumers have complained since the start of the virus outbreak that prices online for certain household essentials, like toilet paper, sanitizers and wipes, have skyrocketed.

Pennsylvania Attorney General Josh Shapiro and 33 other attorneys general are requesting that Amazon, Facebook, ebay, Walmart and Craigslist should actively keep an eye out on their sites for illegal price hikes and put procedures in place to keep more from happening in the future.

MARKETS: Stocks are higher in back and forth trading Wednesday after Congress and the White House reached a deal to inject nearly $2 trillion of aid into an economy ravaged by the coronavirus. The S&P 500 was up more than 2% in afternoon trading.

Travel-related stocks are a bright spot, bouncing back from lows as investors bargain hunt. Shares of Norwegian Cruise Line and Royal Caribbean are up double digits, while hotel operators including InterContinental Hotels, Wyndham Hotels & Resorts and Marriott International have single-digit gains.

TRAVEL: The Associated Press reported this week that airline services are teetering on the brink. Travel bans are rolling out across the globe, businesses are cancelling travel, conferences have been cancelled and vacationers are staycationing.

On Wednesday, American Airlines took out of circulation half of all middle seats and all seats adjacent to flight attendant jump seats on every flight to provide more social distancing. The airline will also be able to proactively reassign seats to create more space between customers beginning March 24.

American will offer limited food and drink options from March 27 through April 30 to provide minimal contact between flight attendants and customers and offer more social distancing. The reduced service will be based on flight length and destination.

Air traffic controllers are back at work at McCarran International Airport in Las Vegas, a week after a co-worker tested positive for the new coronavirus. The Federal Aviation Administration posted an update Wednesday saying that staffing should increase throughout the day. Airport service slowed due to airline cancellations and delays were reported after the control tower closure on March 18. McCarran ranks as one of the busiest passenger airports in the nation. But arriving flights were reduced Monday to about 12 an hour. Federal officials reported Tuesday that a security screener at McCarran also tested positive for COVID-19.