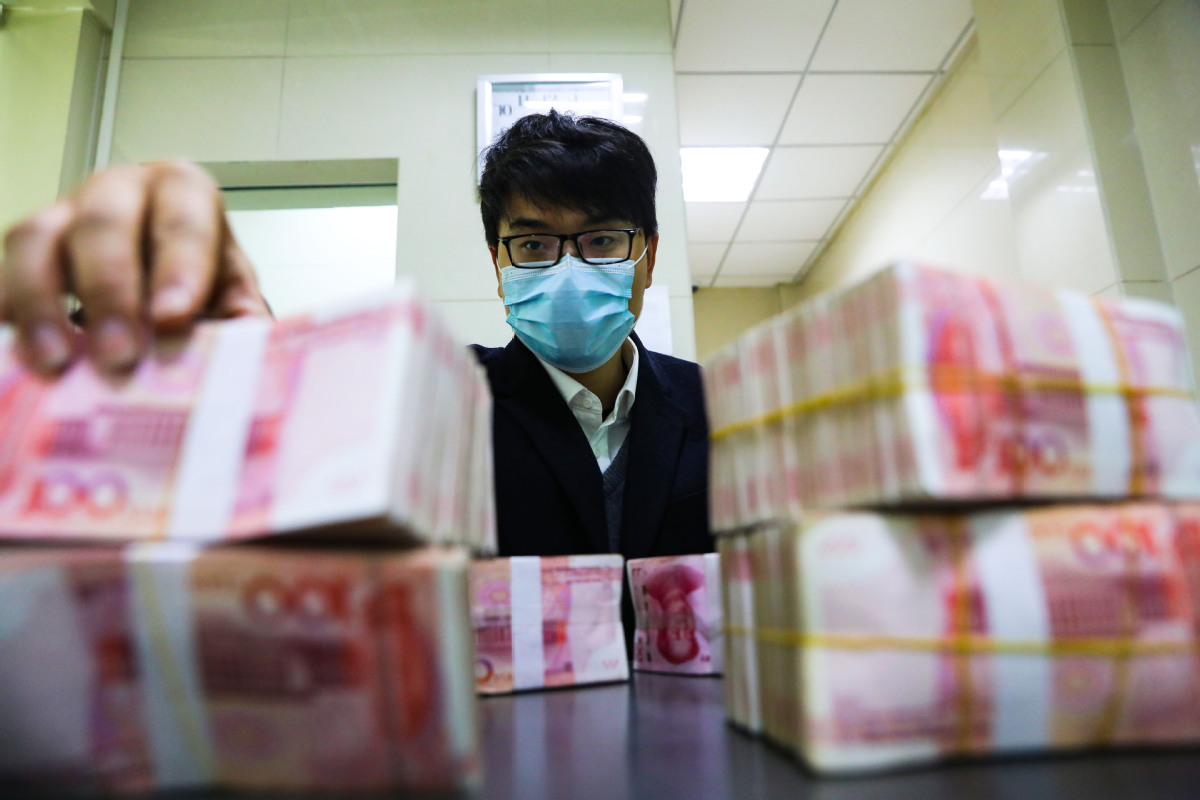 An employee of Lin'an Rural Commercial Bank counts banknotes at the bank's branch in Xitianmu area in Hangzhou, capital of Zhejiang province, on Feb 25. [Photo by Hu Jianhuan For China Daily]

Funds raised through special fiscal measures should be used to stabilize economic growth and ensure the smooth operation of primary-level governments and businesses, Finance Minister Liu Kun said on Monday.

Speaking at a meeting, Liu urged provincial-level and primary-level government finance officials to implement the requirements of the 2020 Government Work Report, based on an analysis of the current fiscal revenue and expenditure situation, and make fiscal plans for the next stage.

Fiscal measures should be more proactive to ensure the implementation of the "six priorities", namely, employment, people's livelihoods, the development of market entities, food and energy security, and stable operation of industrial and supply chains and also focus on ensuring stability in areas that are closely connected with economic development, according to the finance minister.

China has projected deficit-to-GDP ratio at more than 3.6 percent this year in its Government Work Report, as an indication of its proactive fiscal policy. It will also look to increase government spending to offset the downside economic pressure. Cutting taxes and fees will help ease the operational difficulties of businesses, while the central government's payment transfers to the local authorities will guarantee the management of primary-level governments, the minister said.

During the first quarter of this year, fiscal revenue fell by 14.3 percent on a yearly basis. Overall fiscal expenditure declined by 5.7 percent from a year earlier, according to data from the Ministry of Finance.

"We expect fiscal revenue to decline by 1.9 percent on a yearly basis this year and fiscal spending to increase by 1.9 percent. Increased spending on COVID-19 related measures will have to be financed by cuts in other general expenses, said Zhu.

"We will cut over 50 percent of the outlay for nonessential, nonobligatory expenditure at the central government level, and the money saved will be used to support primary-level governments, enterprises and people's basic living needs. Governments at all levels must tighten their belts and reject pointless formalities and spending splurges," said Liu.

Financial departments at all levels should deliver the funds directly to areas having financial difficulties in an emergency. The directly delivered funds should be used for the benefit of all companies, especially small firms. People who live on social security schemes, subsistence allowance, unemployment benefits, old-age support and those living in difficulties should also benefit from these funds, the minister said.

Liu said that debt risk should not be neglected despite the strong fiscal stimulus designed to contain the COVID-19 pandemic effect. "We should not create new risks by raising debt illegally because of financial difficulties. We should never leave the sequela after solving short-term problems and the bottom line should be firmly held to prevent systemic risks."