BUSINESS Fishermen return from sea with big catch, no place to sell

Fishermen return from sea with big catch, no place to sell 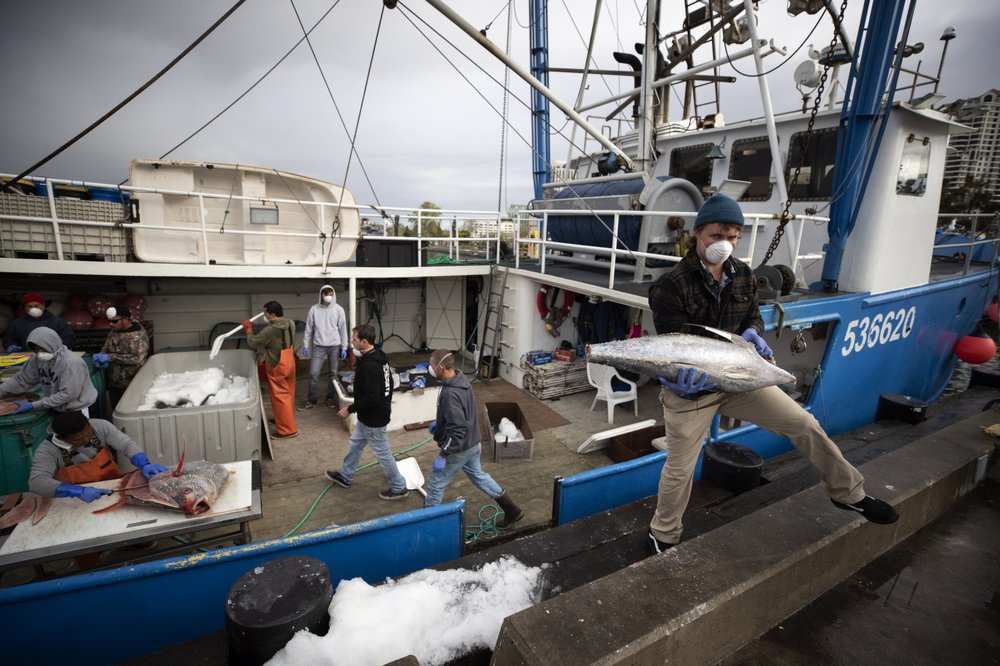 The coronavirus literally traveled over them from Asia to California while they were on the high seas catching tuna.

They were as safe as anyone doing one of the most dangerous jobs, and now? Fishermen are returning home to California to find a state all but shuttered and nowhere to sell their catch.

A handful of tuna boats filled with tens of thousands of pounds of fish are now floating off San Diego’s coast as they scramble to find customers. Many wholesalers stopped buying as restaurants were ordered closed except for takeout.

San Diego, once known as the tuna capital of the world, boasts a thriving industry that sells primarily to wholesale buyers and restaurants.

Many are third-generation fishermen, like Nick Haworth. He pulled up his vessel to a dock in downtown San Diego with 30,000 pounds (13,600 kilograms) of big eye tuna and opah. It was selling for $10 a pound to the public, a third of the market price.

Another two vessels planned to sell at the dock Saturday.

“This is a quarantine special,” a tanned Hawthorn donning a mask and blue surgical gloves joked as he took orders from people standing 6 feet (1.8 meters) apart on the dock while seals barked around his boat, the Kaylee H.

When Haworth left a month ago to fish about 600 miles (970 kilometers) from the coast, the coronavirus was still concentrated primarily in China. The general feeling, he said, was that it was coming under control. President Donald Trump was telling the nation the numbers were only going to get better.

As his crew motored farther out to sea, a pandemic was declared, though Haworth didn’t know it because his radio was broken.

It wasn’t until they were returning weeks later and were within 50 miles (80 kilometers), or about five hours away, that they picked up a signal for their TV to work and learned from the news of the worldwide closures, including in California and the Philippines, where many of his crew members have a family.

California on Friday confined its 40 million residents to home in the strictest response yet.

“The second we saw the news, I knew we were screwed,” Haworth said as he drove a boat filled with thousands of pounds of fish toward home. “We were all like, ‘What the hell is going on?’”

The wholesale buyers who agreed to buy the fish reneged, he said.

Haworth was grateful people were lining up — keeping a safe distance apart, of course. The fishermen were also offering home deliveries.

For the past few years, boats have been allowed to sell from the downtown dock on Saturdays as part of a large farmer’s market. Haworth hopes the city will allow the dockside market to stay open regularly during the lockdown.

Local fish advocate Tommy Gomes, known as Tommy the Fishmonger, was helping with the impromptu fish market at the city’s G street dock, allowing only about a dozen people on the dock at a time.

“Wholesalers are stuck with all these fish and they’re not taking more, so fishermen are in a tight spot,” he said. “This stuff doesn’t get better with age, like beef.”

Jim Silveira, also a third-generation fisherman and owner of Chula Seafood, said one fisherman already had to dump $80,000 worth of squid overboard.

He fears boats will stop going out, crews will be laid off, and when the governor’s shelter-in-place order is lifted, it’ll take months to get the supply back.

Silveira was helping a vessel that pulled up to his dockside fish shop in Chula Vista, south of San Diego, with 35,000 pounds (15,875 kilograms) of tuna. They decided to package most of what would normally be sold locally and fly it to other states like Florida and Texas.

Wholesaler Dave Rudie of Catalina Offshore bought from another boat with 30,000 pounds (13,600 kilograms), though his sales have plummeted. He’s offering it to the public for $7.99 a pound at his warehouse.

“I made a commitment to the boat, so I bought the fish and am doing the best I can to still pay fishermen, but it is a challenge, for sure,” he said. “These are strange and unusual times. But I do see some future: We all have to eat.”