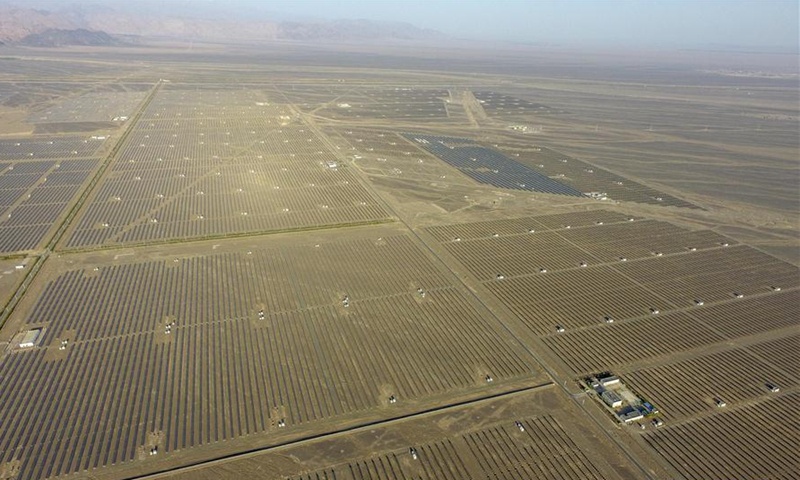 While global attention centers on China's economic targets as top officials meet in Beijing to map out blueprints for the country's development over the next five years and beyond, policies on environmental protection, specifically reducing carbon emissions are expected to be highlighted in the new 14th Five-Year Plan (2021-25), Chinese experts said.

While China has taken serious steps in recent years to address environmental and climate issues, including cutting greenhouse gas emissions and joining a global climate pact, new pledges by the top leadership to reach carbon neutrality by 2060 and the need to shift China's economic growth model toward high quality and sustainability add fresh urgency. The upcoming five-year plan is crucial in spearheading such efforts.

The 19th Communist Party of China (CPC) Central Committee is holding its fifth plenary session in Beijing, where top CPC officials are reviewing proposals for the 14th Five-Year Plan for social and economic development and long-term visions through 2035. Details of the proposals haven't yet been disclosed, but some documents are expected to be released at the closing of the meeting on Thursday.

"When the fifth plenary session issues policy outlines, I think a foundation will be established to realize the carbon neutrality goal," Zou Ji, president of Energy Foundation China, an organization dedicated to sustainable energy development, told the Global Times on Tuesday. The 14th Five-Year "covers one-eighth of the 40 years before the 2060 deadline, so a good starting point would be established."

During a speech at the UN General Assembly in September, Chinese President Xi Jinping announced that China aims to peak carbon dioxide emissions before 2030 and achieve carbon neutrality before 2060, and he vowed to adopt "more vigorous policies and measures," according to the Xinhua News Agency.

While the pledge has been described as ambitious given the massive efforts and investment required -- basically, a whole-of-society approach is necessary — many experts believe that the goal is definitely reachable and China, with its unique political and economic systems, is right on track to make that happen.

"Through enhanced scientific research and global cooperation, China can peak carbon dioxide emissions in 2030 and achieve carbon neutrality before 2060," said Guan Dabo, a distinguished professor of Climate Change Economics in the Department of Earth System Science at Tsinghua University and a fellow of the UK's Academy of Social Sciences.

However, reaching that goal would require many major policies and measures in a wide range of areas from research and development (R&D) in clean energies to green financing and new infrastructure construction, according to Guan.

Specifically, during the 14th Five-Year Plan period, clean energies such as hydrogen and nuclear energy must play a big role to replace fossil fuel, new infrastructure projects must be built to produce zero carbon dioxide, and emission reduction technologies in carbon capture, utilization and storage, also known as CCUS, must be developed and deployed.

"All that will cost a lot, but the cost could be reduced through increasing the scale," Guan said, noting that with such efforts, China could peak carbon dioxide emissions as early as 2025, way before the deadline of 2030, which would pave the way for the longer-term goal of carbon neutrality.

To reach those goals, much groundwork will be needed in the 14th Five-Year Plan, including a target for total carbon emissions, according to Zou. "This will lead to a lot of changes in many areas, including calculation, monitoring and review. It would take three to five years to set that up," he said.

Also, there are concerns about the impact on consumer prices, industry chains and economic growth, given the massive input and profound changes needed.

However, "balancing environmental protection with economic growth is a question for 10 years ago. What we are talking about now is that carbon neutrality would boost economic growth and promote structural changes and upgrades, which is completely in line with China's supply-side reforms," Zou said.

A recent report by the Boston Consulting Group said that the "green economy" could contribute over 2 percent to GDP by 2050 and investments for reaching carbon neutrality could reach as much as 100 trillion yuan ($14.9 trillion) in the next 30 years.

Already, many local governments in China and companies in the country are heeding calls from top officials to cut carbon dioxide emissions. China's largest offshore oil and gas producer CNOOC, for example, announced last week that it would aim to raise the share of natural gas from 21 percent to 50 percent of its total output by 2035 to contribute to a national carbon neutral target by 2060.

German carmaker Volkswagen China said on Monday that it would bring all new electrified models to the 3rd China International Import Expo in November to highlight its theme of "Shaping a Carbon Neutral Future."

To track the rising trend of Chinese businesses' carbon-cutting measures, US index provider MSCI recently launched China climate change indexes, which include big firms such as Alibaba, Tencent and Baidu.

Global cooperation is also crucial to achieve those goals and broader goals under the Paris agreement, experts noted. "Climate change is a global issue. There can't be countries taking 'free rides,' while others are trying hard to reduce emissions," Guan said, adding that China could cooperate with Europe over technologies, while helping other developing countries.

China's pledge for carbon neutrality has gained broad support from many in the international community, most notably the EU, which has been in close cooperation with China over the Paris agreement, after the US withdrew from the pact. Japan has also made similar pledges as China.