International Monetary Fund chief Christine Lagarde called on world leaders Monday to fix global trade systems instead of trying to tear them down in a rebuke to nationalist politicians pushing tariffs and protectionism. 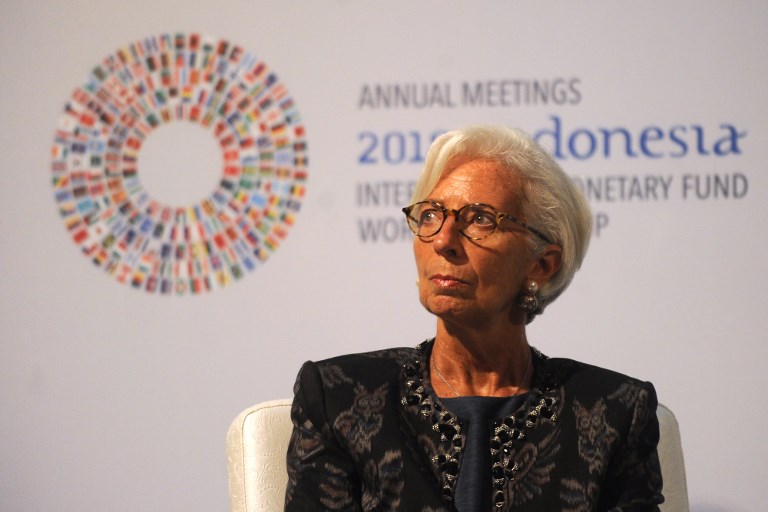 "We need to work together to de-escalate and resolve the current trade disputes," Lagarde said at am IMF and World Bank gathering in Bali.

"We need to join hands to fix the current trade system not destroy it," she added.

Finance ministers and central bankers from many of the IMF's 189 member nations are meeting in Bali this week where concerns about protectionism have taken centre stage.

Lagarde said she remained optimistic that disputes between nations could be ironed out, citing the Trump administration's recent successful renegotiation of the NAFTA agreement between the US, Canada and Mexico.

"It's tempting to be a bit depressed about this perspective but I'm actually hopeful because there is a clear appetite to improve and expand trade," she said.

Ahead of the Bali gathering, the IMF reviewed its global growth forecast down 0.2 percent to 3.7 percent for 2018 and 2019 -- citing trade tensions, protectionism and rising debt levels as the main causes.

"This year the growth doesn’t look so good, what is different, is the trade, the tensions, protectionism, the tit-for-tat, the retaliations," Gurria said.

In the middle of a recovery period he added, "we started doing these things and we slowed down."

The OECD has also revised down its global growth forecasts.