Follow-up talks on China-Singapore FTA to use negative list: MOFCOM 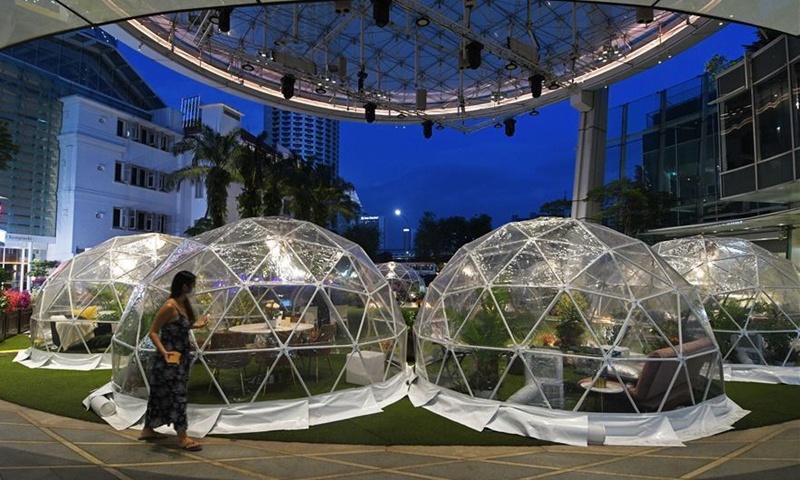 A woman walks past dining domes, installations which help prevent the spread of the COVID-19 epidemic, at Capitol Singapore Outdoor Plaza, Singapore, on Oct. 21, 2020. (Photo by Then Chih Wey/Xinhua)

Follow-up negotiations on an upgraded China-Singapore free trade deal, jointly announced by the two countries on Tuesday, will be conducted in the form of a negative list and focus on service trade and two-way investments, China's Ministry of Commerce (MOFCOM) said on Thursday.

The talks will increase the transparency of bilateral services and investment policies, enhance the level of service trade and investment liberalization between the two nations, create a better business environment for businesses and promote economic recovery and development in the two countries and in the Southeast Asia region, Gao Feng, a MOFCOM spokesperson, told a regular press conference in Beijing.

China and Singapore signed the China-Singapore Free Trade Agreement, also known as CSFTA, on October 23, 2008. The protocol on upgrading the pact was signed on November 12 in 2018.

Compared with the previous agreement, the revised one has upgraded the rules of origin, customs procedures and trade facilitation, trade remedy, trade in services, investment, and economic cooperation. Three cooperation fields were added: e-commerce, competition policy and environment.

China and Singapore also incorporated the Belt and Road Initiative into their upgraded agreement.

Amid the pandemic this year, China and Singapore carried out in-depth cooperation in medical and anti-epidemic materials, established "fast channels" for necessary personnel exchanges, and jointly maintained the stability and smooth flow of regional supply chain, Gao said.

China-Singapore economic and trade cooperation in various fields has resumed in an orderly manner, Gao added.

The value of newly signed contracts hit $3.75 billion, a year-on-year increase of 10.6 percent, which fully reflects the great resilience and huge potential of their bilateral cooperation, Gao said.