Despite rosy April export data in China, experts remain cautious about the country's export prospects in the coming two months, as the negative impact of slumping foreign demands might eventuate further, they predicted. 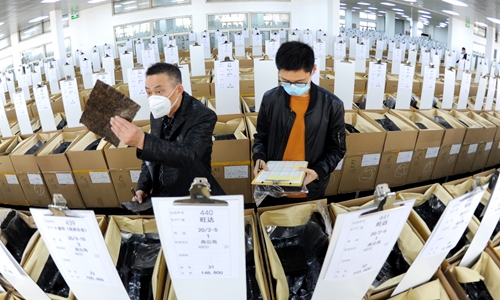 Buyers examine and pick dried seaweed at a trade fair in an industrial park in Lianyungang, East China's Jiangsu Province, on Saturday. Online livestreaming is helping 131 firms offer their products to domestic and foreign buyers as they seek to expand sales channels amid the COVID-19 pandemic. (Photo: IC)

China's April export data has been a surprise to many market observers, as the country achieved above 8 percent growth, both monthly and yearly, despite the lingering impact from the coronavirus and the spread of the pandemic globally, according to latest customs data.

Pang Chaoran, an associate research fellow at the Chinese Academy of International Trade and Economic Cooperation, told the Global Times that the "surprise" export growth might be driven by the implementation of delayed orders in February and March, when China was suffering from the epidemic and shipping goods out was difficult.

"It also has something to do with the fact that some countries, stuck in the midst of the spreading pandemic, had to import from China because their own production was severely hampered," he said.

In particular, the large volume of medical equipment exports might have made up for the decrease in some traditional export items from China, Professor Ye Hang of the College of Economics at Zhejiang University, told the Global Times.

However, talking about a future outlook, the experts are cautious again, as they still expressed worries over the impact of the pandemic.

"I believe a lack of orders would still exert relatively large pressure on China's exports in May and June," Bai Ming, a research fellow at the Chinese Academy of International Trade and Economic Cooperation, told the Global Times.

Pang predicted that China's monthly export growth might be roughly the same as April's in May and June. "The recovery of the international market is slower than expected, which is to cloud China's export prospects," he said.

According to the experts, China's efforts to multiply and diversify trade partners would help prop up its general exports, but uncertainties of China-US trade relations would still shadow the sector.

In yuan terms, China's exports to the US plunged by a staggering 23.6 percent on a yearly basis in the first three months this year.

"China should diversify its trading partners even without the US-initiated trade war. Now as trade friction with the US persists on, the need to diversify becomes stronger," Bai said.

Ye stressed that steadily rising trade with emerging markets can help offset the influence of slumping China-US trade, but developed markets like the US and Europe can't be easily replaced as a result of their market scale.