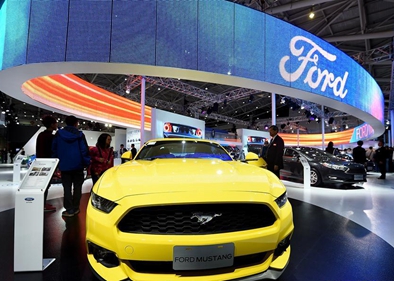 CHICAGO, Oct. 16 (Xinhua) -- The Ford Territory, an all-new SUV exclusive to the Chinese market, debuted Tuesday as part of the US auto maker's "in-China, for-China" strategy.

The mid-size SUV, a product of Ford's partnership with local auto maker Jiangling Motors, was introduced in Qingdao, a city on China's east coast.

"It's a great proof-point for our in-China, for-China strategy," said Peter Fleet, president of Ford's Asia Pacific operations, in a statement.

The Territory is the first new vehicle launched by Ford in China in years, after the automaker realized that an aging vehicle lineup led to its declining share in China's fast growing market.

Ford's sales in China reportedly dropped 43 percent in September from the same month last year, a new sign that its sales are slowing in the world's largest car market.

Ford's hometown competitor, General Motors, however, has displayed a relatively better performance in China, which has replaced the US as GM's largest market.