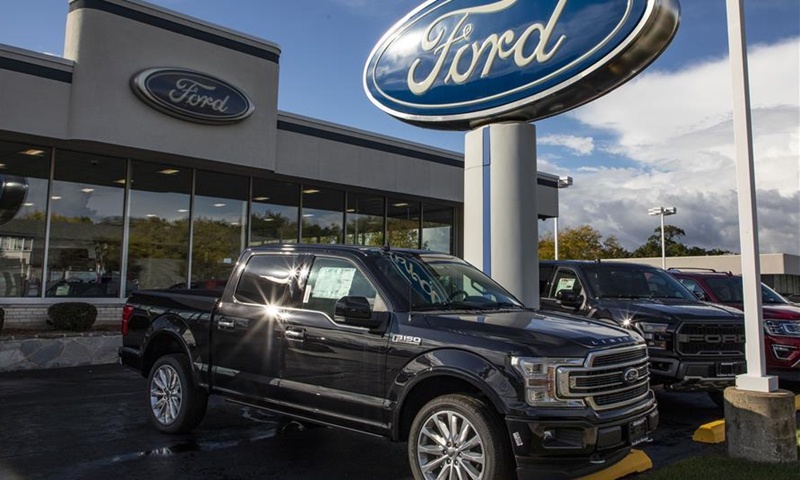 A Ford F-150 (Front) is seen at a Ford dealership in northern suburbs of Chicago, Illinois, the United States, on Oct. 1, 2020. Ford Motor Co. sold 551,796 vehicles in the third quarter of this year, down 4.9 percent year on year, according to the quarterly performance results the U.S. automaker released on Friday. (Photo: Joel Lerner/Xinhua)

Revenue of the U.S. automaker was 37.5 billion dollars in the third quarter, with net income at 2.4 billion dollars and net income margin at 6.4 percent, according to the quarterly results released by Ford on its website on Wednesday.

Ford attributed the strong performance to higher consumer demand, better operational execution, and the strategy of focusing on franchise strengths.

Ford continued to derive benefits from its restructuring program in Europe, realizing a cumulative 1 billion dollar reduction in structural costs since 2018.

Ford's wholesale product shipments in China went up 22 percent in the third quarter as market share of the company's mix of SUVs increased 13 points to 36 percent. Ford also reported pre-tax earnings increase on the Chinese market in the third quarter, the second straight quarter of improvement.