DETROIT (AP) — Under pressure from US safety regulators, Ford is recalling about 2 million F-150 pickup trucks in North America because the seat belts can spark and cause fires. 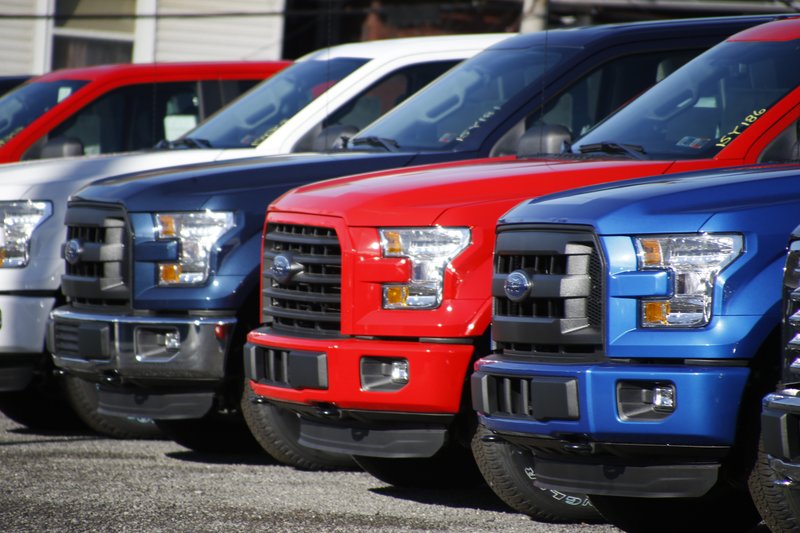 A row of 2015 Ford F-150 pickup trucks are parked on the sales lot at Butler County Ford in Butler, Pa. Under pressure from US safety regulators, Ford is recalling about 2 million F-150 pickups in North America because the seat belts can cause fires. The recall covers certain trucks from the 2015 through 2018 model years. (File photos: AP)

The recall, which covers trucks from the 2015 through 2018 model years, comes about one month after the National Highway Traffic Safety Administration began investigating fires in the pickups, which are the top-selling vehicles in the United States.

Ford said Thursday that it has 23 reports of smoke or fire in US and Canadian trucks, but it’s not aware of any injuries. NHTSA began investigating in early August after getting five fire reports, including three reports that trucks were destroyed.

According to Ford, seat belt pretensioners can generate excessive sparks when they tighten before a crash. That can ignite gases inside a support pillar between the front and rear seats, causing insulation and carpet to catch fire.

The seat belt pretensioners, which prepare seat belts to gradually restrain passengers, were made by ZF-TRW and now-defunct air bag and seat belt maker Takata, which was purchased by Joyson, another auto parts supplier.

The Regular Cab and SuperCrew Cab trucks were built between March 12, 2014 and Aug. 23, 2018, according to documents posted Thursday by NHTSA.

Dealers will remove insulation and install heat-resistant tape to repair the trucks. They also will remove remnants of wiring tape and modify interior panels in Regular Cab trucks. Owners will be notified starting Sept. 24.

In one of the complaints filed with the US government, an owner in Grand Rapids, Michigan, told NHTSA that on July 7, a deer ran into the driver’s side of a pickup, causing minor damage. The side air bags inflated, and after five to 10 minutes, a passenger noticed a fire on the bottom of the post between the front and rear doors where the seat belts are located. “The truck went up in complete flames in a matter of minutes and is a complete loss,” the owner wrote.

People who file complaints are not identified in the NHTSA database.

Ford said in a filing Thursday with US securities regulators that the recall will cost about $140 million and will be counted in third-quarter results.

The company maintained its full-year adjusted earnings-per-share guidance of $1.30 to $1.50.

The problem surfaced in the spring of 2017 as Ford received four reports of post-crash interior fires in the trucks from April through October, according to documents Ford filed with the US safety agency.

Ford began investigating but wasn’t able to identify any problems with the seat belt pretensioners from the trucks, and the company couldn’t re-create any fires. In November of 2017, Canadian safety regulators contacted Ford about a fire in a 2015 pickup. It received five more reports of fires between January and March of this year, but still couldn’t identify the source of the fires, according to the documents.

From April through June, Ford got six more reports of fires in 2015, 2017 and 2018 pickups and found the potential for excessive sparks in the pretensioners. The company also began analyzing exhaust gases from the seat belt mechanisms. Then NHTSA contacted Ford about three fire reports, and the agency and company jointly inspected one of the trucks on June 28.

NHTSA opened its investigation on Aug. 3.

From July through August, Ford did more tests and found that the sparks could ignite the exhaust gases, and Ford approved a recall on Aug. 24, according to the documents.

Cover file photo: A worker inspects a new 2015 aluminum-alloy body Ford F-150 truck at the company’s Kansas City Assembly Plant in Claycomo, Mo on March 13, 2015. Under pressure from US safety regulators, Ford is recalling about 2 million F-150 pickups in North America because the seat belts can cause fires. The recall covers certain trucks from the 2015 through 2018 model years.