BUSINESS Ford to ramp up Lincoln rollout in China

Ford to ramp up Lincoln rollout in China

Much at stake for carmaker as trade tensions with US escalate

Ford has said it plans to build an all-new sport utility vehicle in China by the end of 2019, however the company has not detailed future production plans for the Lincoln brand in China beyond that. 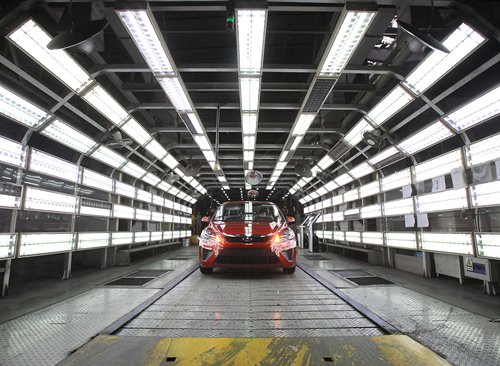 "Our localization plans to support the China market are on track and will serve to further drive Lincoln's growth in China," Lincoln spokeswoman Angie Kozleski said. "Beyond that, it would be premature to discuss our future product and production plans or timing."

Sources familiar with Ford's production plans told Reuters the automaker now expects to begin building the new Lincoln Aviator in China in late 2019 or early 2020, along with replacements for the MKC compact crossover and the MKZ midsize sedan, followed in 2021 by the all-new Nautilus, which replaces the Lincoln MKX crossover.

A fifth model, a small coupe-like crossover, is tentatively slated for production in China in 2022, the sources said.

Ford has much to lose if the war of words over trade between China and US President Donald Trump escalates into a full-blown tariff war. Last year, it shipped about 80,000 vehicles to China from North America, more than half of them are Lincolns, in order to support the brand's growth.

All Lincoln vehicles that Ford now sells in China are brought in from North America.

Even if China does reduce its 25 percent tariff on imported vehicles, it is not clear that would mean a big, long-term increase in Fords and Lincolns made in US factories heading to Chinese showrooms.

Ford is pursuing long-range plans to build more vehicles in China to serve a market that is now roughly 60 percent larger than the US market, and projected to keep growing.

But it is playing catch up to hometown rival General Motors Co and German luxury brands including Audi, BMW and Mercedes-Benz, which have invested heavily in Chinese production in recent years as a form of insurance against trade, political and currency gyrations and to lower price points for their premium cars.

Chinese vehicle imports from all markets last year climbed to 1.2 million, but still represent less than 5 percent of total vehicle sales in the country, according to figures from the China Automobile Dealers Association. Less than a quarter of the imported vehicles sold in China, 267,473, according to Statistic came from US auto plants.

The current 25-percent tariff rate makes it tough for Ford's American premium brand to compete with GM's Cadillac and the Germans, which avoid the import tariff on their locally built vehicles.

"As long as Lincolns are not manufactured in China, the brand's sales will no doubt suffer continuously," Zhu Kongyuan, secretary general of the China Auto Dealers Chamber of Commerce, told Reuters.

The Lincoln brand launched in China four years ago, and local production of the first Lincoln-brand vehicles will not start for another 18-24 months, people familiar with the company's plans said.

The entire localization process could take Ford as long as four years.

While it sold 54,124 vehicles in China last year - a record for the brand - Lincoln continues to trail Cadillac and the German luxury brands by a wide margin in that market.

Cadillac - which GM launched in China in 2004 - builds in China virtually all of the vehicles it sells there and thus avoids the steep import duty. Cadillac outsold Lincoln by more than three-to-one in China last year, selling a total of 175,489 vehicles though a network of roughly 180 retail stores. China is Cadillac's largest market.

Top images: a view of the production line at Changan-Ford factory in Chong-qing Municipality in Southwest China. (File Photo: VCG)