Global auto giants are teaming up with Chinese automotive battery suppliers in an effort to reduce costs and promote the localization of electric vehicles in the world's largest auto market. 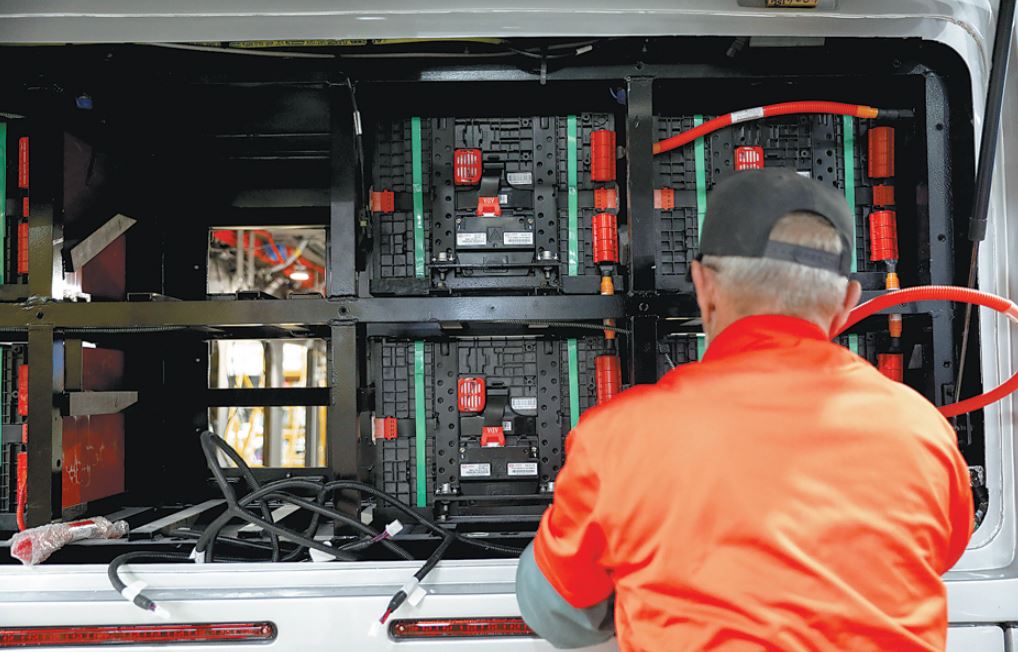 An employee works on the batteries of an electric bus at the BYD Coach and Bus factory in Lancaster, California. (Photo: China Daily)

The three companies dominate the market with about 79 percent of the country's new energy vehicle battery installments in the first half year, according to statistics of the China Industry Technology Innovation Strategic Alliance for Electric Vehicle.

Adding BYD to the list of suppliers would be important from a diversification perspective, especially in China, where the new Audi Q2 L e-tron electric vehicle is using CATL cells.

BYD is in advanced talks with Audi to supply batteries for upscale cars made on the Premium Platform Electric architecture jointly developed by Audi and Porsche, according to the report. The first models are expected to hit the market around 2021.

The talks included the exploration of other areas like joint developments, joint venture companies or acquisition of a stake in BYD.

Both companies are in discussions with other potential partners, and there's no guarantee that an agreement will be reached, Bloomberg reported.

Volkswagen is also exploring potential investments with other battery suppliers and has been examining several possible targets, including Guoxuan High-Tech Co, a battery maker based in China's Anhui province, Bloomberg reported.

Shares of Guoxuan High-Tech jumped 6 percent in Shenzhen trading after the report, more than doubling its gain for the year. The company provides batteries for Chinese car manufacturers, including BAIC and Geely.

A representative for Guoxuan declined to comment. The company said they have been negotiating with a top international brand in April, but no details have been disclosed because of the confidentiality agreement.

The German carmaker is also considering expanding its three vehicle-making joint ventures in China with SAIC Motor, FAW Group and Anhui Jianghuai Automobile Group as part of a strategy review.

The Chinese market will take on a bigger role for Volkswagen as both a production hub and research center, CEO Herbert Diess said in Shanghai in April.

The carmaker plans to deliver 22 million pure electric vehicles by 2028, with more than half being produced in China. CATL became Volkswagen's initial battery provider in China last year.

CATL, as China's largest power battery maker, has partnered with a large number of carmakers, including FAW, SAIC, Nio, BMW, GM and Honda.

To prevent monopoly, carmakers should seek diversity in their investments and have more supplier options, Zhang said.

Volkswagen is not the only carmaker to explore Chinese battery suppliers.

The two parties will jointly develop sedans and low-floor SUVs as well as the onboard batteries for vehicles with plans to launch them under the Toyota brand in the first half of the 2020s.

BYD Chairman Wang Chuanfu said in December the company was planning to list its battery business by the end of 2022.