BUSINESS Foreign brand cars' sales in China rise in May

Foreign brand cars' sales in China rise in May 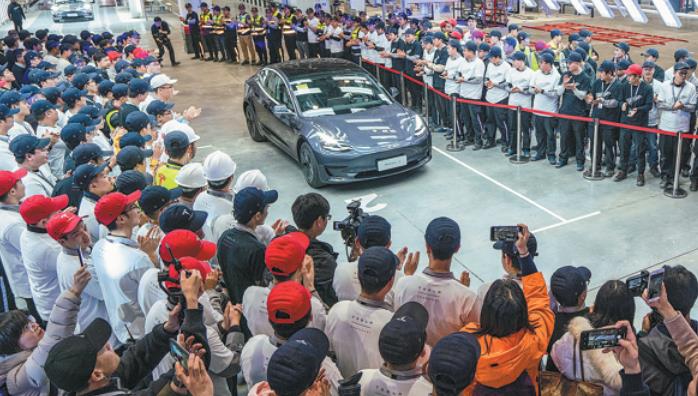 Fifteen electric sedans ordered by employees of the new Tesla factory in Shanghai were delivered at a ceremony in December, 2019. (File photo: China Daily)

Foreign brand cars' sales in China continued to rise in May as offline consumption accelerated its recovery. As the US and the EU are showing almost no economic recovery signs amid the global pandemic, China is expected to be the most promising car market in 2020, an analyst said.

Major Japanese brands such as Nissan Motor, MAZDA and Toyota Motor Corp reported sound sales performances in China in May.

Toyota reported May sales of 166,300 cars in China, an increase of 20.1 percent year-on-year. Toyota's sales in the market have now recovered to pre-coronavirus levels and are expected to further rise through the rest of the year with the rollout of the company's compact Wildlander SUV.

Cui Dongshu, secretary general of the CPCA, told the Global Times on Wednesday that foreign brands' sales performances in May were within expectations as the country's auto market has arguably recovered its vitality.

"As there is yet no sign of auto market recovery in the US or Europe, China may be the most promising car market in 2020," he said, predicting the country's auto market growth will be 7 percent this year.

Despite the COVID-19 impact, foreign brands ramped up investment in the Chinese market.

Toyota announced on June 5 that it would invest about 200 million yuan ($28.24 million) in a new joint venture with five Chinese auto companies to develop hydrogen fuel cell technology.

That came after Volkswagen announced its plan to invest 1 billion euros ($1.13 billion) to acquire 50 percent of shares of Anhui Jianghuai Automobile Co in Hefei, East China's Anhui Province to expand its presence in China and the electric vehicle sector.