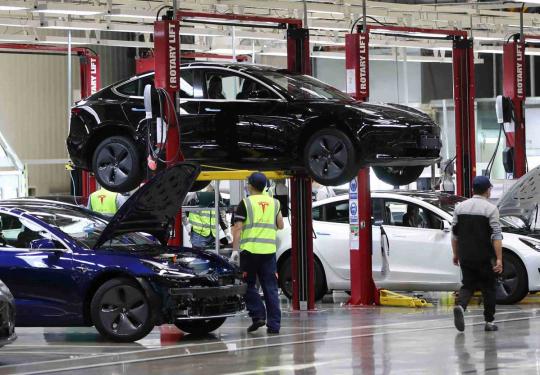 Technicians work at the Tesla gigafactory in Shanghai in November 2020. (Photo: Xinhua)

With the upgrading and developing of China's pharmaceuticals and healthcare industry over the past decade, some global early clinical development programs launched R&D exploration in China, ensuring China becomes one of the first-tier countries to get new drugs into the market.

There are a number of multinationals like Merck, which considers China as one of the important production bases, sales markets and R&D centers.

Taking Shanghai as an example, by the end of May, the number of regional headquarters of multinationals settled in the city reached 848, as well as 512 foreign R&D centers.

Schneider Electric established four R&D centers in Beijing, Shanghai, Shenzhen and Xi'an, while L'Oreal set up the first investment company in China and also listed the country as one of the three beauty makeup technology centers in the world.

FDI inflow also proved the trend. Statistics from the Ministry of Commerce showed, during the first eight months of this year, the actual use of foreign capital rose 16.4 percent to 892.74 billion yuan. In US dollar terms, the inflow went up 20.2 percent year-on-year to $138.41 billion.

The high-tech industries saw FDI inflow jump by 33.6 percent from a year earlier. Among them, high-tech manufacturing and high-tech service industries surged by 43.1 percent and 31 percent respectively.

During the period, investment from the Republic of Korea, Germany, Japan and the United Kingdom climbed by 58.9 percent, 30.3 percent, 26.8 percent and 17.2 percent, respectively.

Foreign companies also showed high enthusiasm for the China International Import Expo, which has been held for four years in a row. The fifth CIIE is scheduled to be held from Nov 5 to 10 in Shanghai.

More than 270 Fortune 500 companies and industry-leading enterprises have confirmed their participation in the fifth CIIE. Over 90 percent of the companies participating in the past four exhibitions will return this year.

The strategy of foreign companies in China has turned more into "in China for China" from "in China for the world", said Xu Qiyuan, a research fellow of the Institute of World Economics and Politics at the Chinese Academy of Social Sciences.