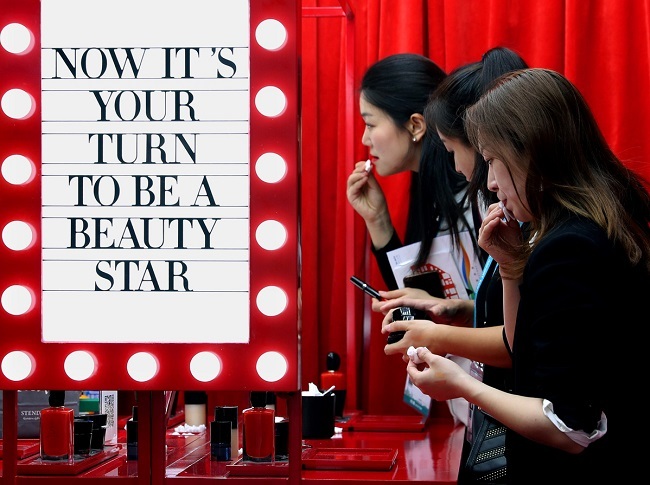 Potential customers try lipsticks at the L'Oreal booth at the second CIIE in Shanghai, on Nov 6, 2019. (Photo: Xinhua)

The CIIE has become an important platform to promote investment and industrial upgrading in China. With the upgrading of industries, first-tier cities as well as many third- and fourth-tier cities have witnessed a consumption upgrading trend due to the CIIE, said Zou Lei, director of the Open Strategy Research Center of the Shanghai Party School.

French company Decathlon Group, the largest sports goods retailer globally, will hold a signing ceremony with Geek+, one of the world's top logistics robot companies, to further increase new retail investment in the Chinese market at the third CIIE.

US group Danaher Corporation, a Fortune 500 science and technology innovator, will hold a foundation laying ceremony for a 37,000-square-meter phase I plant in Suzhou Industrial Park in East China's Jiangsu province.

In July this year, Danaher invested hundreds of millions of US dollars to establish a new R&D and manufacturing base in Suzhou Industrial Park and a new experience center for Danaher diagnostic platform open to customers.

This year is the third consecutive year for Danaher to participate in the CIIE. A comprehensive solution to combat COVID-19 as well as the world's leading black technologies will be presented at the third CIIE, said Wei Chunyan, the company's vice-president of public affairs for China market.

WeWork, the world's leading provider of office space and space as a service platform, will continue to attend this year's CIIE at the trade in services section. In late September, the company announced an additional $200 million investment in WeWork China to help the company fully localize its operations in the country.

Seizing opportunities brought by the recovery of China's consumption market, Danone has continued to increase its investment in China by 100 million euros this year, including the establishment of special nutrition production bases in Qingdao and Wuxi and the establishment of the Shanghai Open Research Center.

Apart from investment projects, the influx of high-quality international brands has also hastened the consumption upgrade in the Chinese market. L'Oreal Group, which has taken part in the CIIE since its inaugural edition, will introduce five new brands to China at the third CIIE in Shanghai.

With the help of the platform provided by the CIIE, many participating enterprises are deeply cultivating the Chinese market and joining in "dual circulation" through external introductions and internal connections.

The CIIE is not only a global event, but also an important window for companies to participate in and share opportunities provided by China's economic growth. All the previous CIIEs have offered Danone with special development opportunities, said Zhou Zhigang, vice-president of Danone China.

The CIIE will also help optimize China's trade structure, promote the link between trade and investment, and in particular promote foreign trade companies to accelerate the formation of an overseas layout oriented to meet domestic demands, better achieve the goal to "buy anywhere and sell anywhere" and facilitate domestic and international "dual circulation", Zou said.

The third CIIE is scheduled to be held at the National Exhibition and Convention Center in Shanghai from Nov 5 to 10. This year, the total planned exhibition area for enterprises is 360,000 square meters, 60,000 more than the previous edition.