China is likely to face a gloomy and complicated prospect in stabilizing foreign investment due to the novel coronavirus onslaught as many global companies in the Chinese market reported difficulties in restarting operations and facing an obstructed supply chain, Chinese officials and experts said Friday.

But corporate representatives told the Global Times that the short-lived black-swan epidemic would not shake their confidence in the Chinese market.

Since the virus outbreak and with holiday factors, many foreign companies in China face difficulties in resuming production due to obstructed personnel movement, transport and logistics, lack of epidemic prevention and control, and material supply shortage, Zong Changqing, director of the department for foreign investment under the Ministry of Commerce (MOFCOM), said at a press conference on Friday.

The work resumption rate of key foreign-funded enterprises in places like Shanghai, East China's Shandong Province and Central China's Hunan Province has exceeded 80 percent, the ministry said, noting that it is expected that foreign firms in most places would resume operations by the end of February.

Foreign firms face a stricter work resumption approval process than domestic ones, as it involves the safety of both foreign firms and people in China, an employee at a US-based tech firm told the Global Times on Friday.

"Our businesses have been largely impacted due to the virus and face intense competition from Chinese rivals. The coronavirus was supposed to be an opportunity for foreign tech firms to sell home office-related software, cloud computing and database, but Chinese tech giants provided similar products for free to universities and companies, like the Alibaba-developed Ding Ding," said the employee, who requested anonymity.

Other firms may face challenges in the supply chain. "The outbreak has resulted in increased demand for key immunity products and there have been some supply chain disruptions across China," Kitty Liu, general manager of Blackmores China, told the Global Times on Friday. Blackmores is an Australia-based healthcare product company.

"However, we are working closely with our Chinese cross-border e-commerce partners and other customers to work through supply and logistics," Liu said.

The sudden strike of the coronavirus has also hindered many foreign senior managers' travel plans to or from China, though all port visa agencies are operating as usual for now except for Wuhan ports, the epicenter of the epidemic, industry insiders said.

As foreign companies feature a high level of globalization in terms of employees, management and industry chain, delayed production in their Chinese branches would hit the firms' global supplies and may further harm their capital turnover, said Sang Baichuan, director of the Institute of International Business at the University of International Business and Economics in Beijing.

For instance, many German firms that have set up branches in Wuhan, capital of Central China's Hubei Province, found it hard to start producing and shipping electronic parts and components to their home country at the moment due to unrecovered factory work and strict border inspection, experts said.

The epidemic impact on global investment in China is evident in January.

According to official data, China's yuan-denominated foreign direct investment rose 4 percent year-on-year in the January, but the growth rate dropped 0.8 percentage points compared to the same period in 2019. 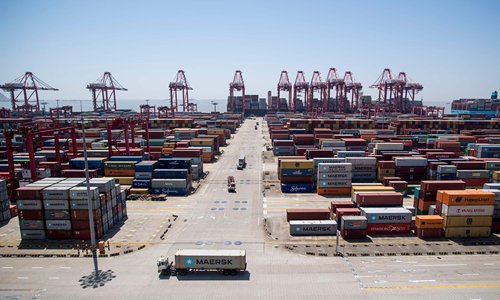 An US cargo ship (back) is seen at the Yangshan Deep-Water Port, an automated cargo wharf, in Shanghai on April 9, 2018. (Photo: VCG)

Officials and experts forecast that the hit on China's attraction of foreign firms is likely to continue in February and March.

But the negative effect from the epidemic is periodic and China's comprehensive competitive advantages to attract global investment has not changed, and many multinational companies' confidence and business strategies in the Chinese market have not changed, Zong said. "We have the faith and resolve to stabilize foreign investment this year."

"On February 10, our 20 companies in China, such as in Nanjing, East China's Jiangsu Province and Shenyang in Northeast China's Liaoning Province resumed operations... we have been able to resume production and proceed with our business in an orderly manner," Ai Zhouping, Chinese head of Germany-based tech company Heraeus, told the Global Times.

"During the special period, despite some challenges, we have remained confident about our long-term success in China, one of Heraeus' strategic markets," Ai said, noting that the firm will continue to strengthen localized innovation activities in the Chinese market.

Regardless of the impact of the novel coronavirus outbreak, 75 percent of respondents from US companies said they are confident in the prospects of the Chinese economy and will not change their re-investment plans, according to a recent report by the American Chamber of Commerce in South China.

"While a majority of companies believe their revenues in 2020 will be impacted by the outbreak, many are working overtime to make up for production that has been delayed by the extended holiday and the fewer number of employees who have reported for work," the Xinhua News Agency quoted Harley Seyedin, president of the Chamber, as saying.

Sang forecast that in a bid to help ease foreign firms' burden, the Chinese government will likely provide more financial support, such as tax cuts, to facilitate fundraising and lower operating costs in the country.

MOFCOM said it will try to stabilize the growth of foreign capital through this year by further cutting restricted sectors on negative lists for the nationwide and free trade zone versions.