Despite the complex global environment, more overseas enterprises have been continuously expanding their investment in Kunshan, East China's Jiangsu Province, as they remain optimistic over development in the province as well as the entire nation, Zhou Wei, a delegate to the 20th National Congress of the Communist Party of China (CPC) and Party chief of Kunshan, said on Sunday. 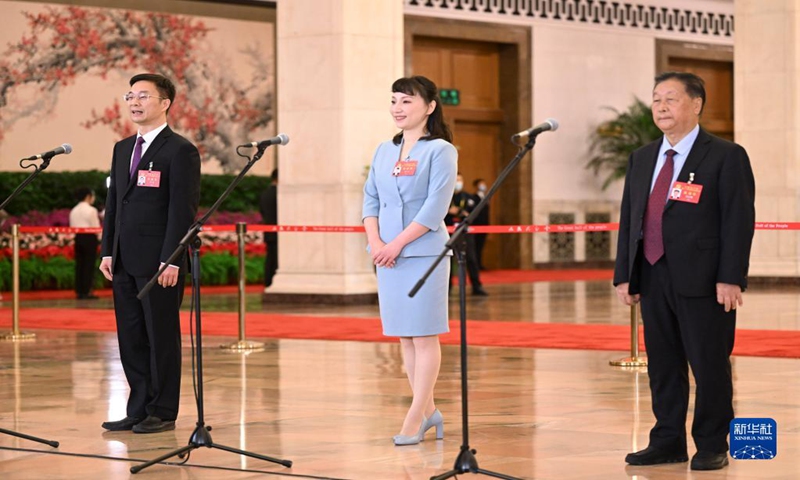 Zhou Wei (left), a delegate to the 20th National Congress of the Communist Party of China, speaks to reporters in Beijing on October 16, 2022. (Photo: Xinhua)

Zhou made the remarks in response to a media question over whether foreign enterprises have been withdrawing investment from the city, a major hub for foreign investments in Jiangsu. Zhou listed many examples of foreign businesses expanding investment in the city.

According to Zhou, a well-known optoelectronic company has recently invested an additional $1.8 billion on top of $1.3 billion invested in 2013 to begin a second phase project in Kunshan.

He added that the city has also reached the annual target of foreign capital inflow in August, four months ahead of schedule, while Kunshan's foreign trade is expected to continuously exceed the $100 billion-mark, potentially ranking among the top 15 cities across China.

The figures for Kunshan are just a representation of foreign enterprises remaining confident over China's future economic development.

China's actual use of foreign capital reached $138.4 billion in the first eight months of 2022, a year-on-year increase of 20.2 percent, data from China's Ministry of Commerce (MOFCOM) showed.

Zhou further stressed that Kunshan's advantages linked to its industrial chain are its biggest strength in attracting foreign investment.

Kunshan is actively building a new intelligent terminal industrial chain and creating favorable conditions for enterprises to settle in the city, said Zhou, adding that it has recently assisted a leading enterprise to obtain four certificates in three days, ensuring that it passed inspections two months ahead of schedule and helping it secure a 20 billion yuan ($2.78 billion) worth of order.