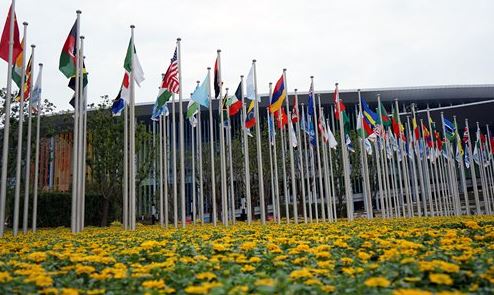 National flags of all the countries attending the upcoming CIIE are rased in the square in front of the National Exhibition and Convention Center at the main venue of the event in Shanghai, on October 15. (Photo: Global Times)

Foreign food producers are seeking opportunities to gain a foothold in the Chinese market as it opens up, especially via the annual import expo, as the world's largest import food market gets bigger and more diverse.

The China International Import Expo (CIIE), a feast of imported food, is going to be tastier this year with more overseas food companies offering their specialties, from Canadian rice to German beer, New Zealand milk and US chocolates. The event will be held in Shanghai on November 5-10.

More than 1,800 food companies from about 120 countries and regions will attend this year's event, with the most exhibitors and the largest exhibition area among all CIIE exhibition halls, Ying Jian, who is in charge the of CIIE's food exhibition hall, said recently during a press conference.

Overseas food companies are eager to approach Chinese buyers and the public through the CIIE at a time when demand for high-quality food is rising and China is gradually opening up its market for food imports with policy encouragement and platforms such as like the CIIE.

"We signed contracts of about 1 billion yuan ($142 million) during last year's CIIE and we hope to double that number this year," Sheng told the Global Times Thursday, adding that the company had increased this year's CIIE exhibition area by 50 percent.

According to Sheng, growing market demand in China is benefiting the whole dairy industry chain in New Zealand from dairy farmers to ranch managers and milk quality inspectors.

The burgeoning market demand in China is even pushing some small countries to export food, which they rarely did before, with the hopes of gaining a stake in China's flourishing food market.

"Previously, we never exported honey at all, partly because the trading business was slack in Zambia and partly because it was hard for local food plants to meet overseas trade inspection requirements," he told the Global Times on Thursday. The large market demand in China prompted the company to set up plants in Zambia that could comply with Chinese customs inspections.

Zhang said that since the first CIIE, the company has exported 20 tons of honey to China. "Chinese buyers' purchasing power is so huge. Last year, about 7,000 people tasted the honey during the CIIE, and orders exploded in the next few months."

He also said that in terms of high-end honey, the Chinese market has yet to be fully tapped. "The high-end honey market in China is mainly divided between brands from Australia and New Zealand. We think that kind of competition is still tolerable and there's room for further market exploration," he told the Global Times on Thursday.

The Chinese food market has become more open, with foreign-funded companies becoming a key force in developing the industry.

Food imports rose 18.1 percent in 2018 year-on-year, up 7.1 percentage points from the previous year, and import value exceeded $70 billion for the first time reaching $72.47 billion, according to a white paper jointly released by China's General Administration of Customs and Beijing-based market consultancy iResearch.

The value was only $16.78 billion a decade earlier.

China ranked as the world's largest food importer in 2017.

"Along with China's consumption upgrades in recent years, you can find that imported food is no longer exclusive to high-end niche markets but has become more oriented to the mass market. It has shifted from a quality change to a quantity change," said Zhu Danpeng, a Guangzhou-based food industry analyst.

Zhu said on Thursday that the huge and fast-growing Chinese consumer market is something that foreign food exporters cannot miss out on, especially in terms of expanding at the mass-market level.