Zhu Yu, a 30-something white-collar worker in a high-rise in Beijing’s Central Business District, walked out of a high-end supermarket with his head spinning.

He hadn’t been to the supermarket for the past two weeks due to a busy work schedule. When he finally went to the store, his understanding of the yuan was redefined.

Just one watermelon cost 100 yuan, or around $14.5. Pears were selling for about 10 yuan apiece and apples were roughly the same price. 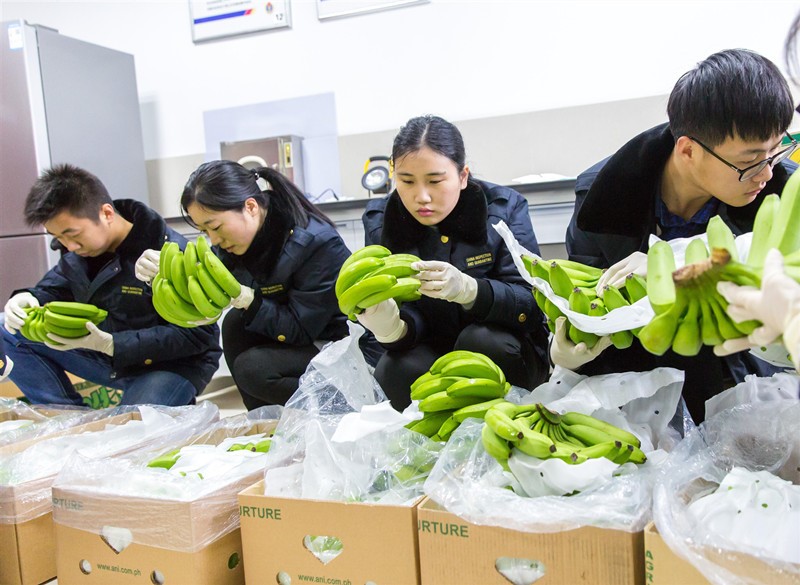 On December 28, 2017, the staff unpacked and inspected the imported bananas from the Philippines at the inspection and sampling room at the designated port of the entry fruit in Tongling, Anhui. (Photo by Chen Lei from People's Daily Online)

When he took out his mobile phone to browse social media, he discovered the phrase “fruit freedom” had become the buzzword of the day. The phrase hints at having the financial freedom to buy any fruit you desire, whenever you want it, without having to worry about the price.

Previously, similar phrases such as “cherry freedom” and “lychee freedom” were tossed around Chinese online communities, highlighting one’s ability to buy these expensive or highly seasonal fruits without worry.

However, the trending social media phrase has also become confirmation for some foreign fruit vendors of the rising attention given to fresh fruits by consumers in China, the world’s largest consumer market.

In 2018, China imported a total of 5.5 million tons of fruit with a gross value of $8.42 billion, according to data released by the Chinese Academy of Social Sciences.

The trade value of fruit jumped by 34.5 percent year-on-year. The country also for the first time saw a trade deficit in its fruit trade with a value at $1.26 billion.

He said the situation is normal and caused in part by the US-China trade war as the tariffs slapped on billions worth of goods have also affected the fruit market.

However, the situation is more like a confirmation of the Chinese market’s vast potential, Matamala said, noting that the Chinese market presents a huge opportunity for fruit traders such as Gesex in the near, middle and long term.

Gesex is a leading exporter of a variety of Chilean fruit to China. Its leading exports include stone fruit, cherries, plums, and nectarines.

“Fresh fruits are a very volatile commodity,” Matamala told the Global Times on Monday, May 20. “But generally speaking, China could improve fresh produce with its local production, and there is no need to turn to other northern hemisphere markets for imports.”

Industry experts have noted that the latest price surges in fresh fruits have been caused by a mix of factors, including unfavorable weather conditions, shrinking refrigerated fruit stocks and increasing volumes of imported fruits.

“Foreign fruit exporters at the upper stream are optimistic about the steadily climbing prices of their products in China,” Liu said. “For sales channels in China, however, rising prices will disrupt sales promotion plans.”

Zhu Danpeng, a Guangzhou-based food industry analyst, told the Global Times Monday, May 20 that the bigger question about the latest round of price hikes should be whether the domestic fruit industry can rise to meet the higher standards of Chinese consumers amid the country’s consumption upgrade.

“Currently, the industrial chain of fresh fruit production, logistics and sales are not fully integrated. The agricultural aspects, industrial aspects and consumption aspects of the fresh fruit chain are disjointed,” Zhu said.

Matamala said the free trade agreement between China and Chile and more protocol agreements giving the green light to more types of fruits have made him bullish about the “huge” Chinese market.

“A new bilateral protocol just paved the way for Chilean pear exports to China. Now we have pears, and the next year we hope we can have citrus fruits. In the long run, we hope China will keep allowing more fruits from other countries to enter its market,” Matamala said.

Matamala said there is a strong complementarity between southern hemisphere fruit from Chile and the needs of the Chinese people. An additional benefit is that Chilean fruits don’t compete with local production.

“I have witnessed and was amazed in the last 10 years how China made great improvements year after year in the quality, cold chain and increase in post-harvest life for apples, grapes, peaches and berries,” said Matamala.

The current round of rising fruit prices is also underpinned by stocks and futures performance.

According to the Economic Observer newspaper, fruit producers’ stocks outperformed the benchmark indexes, and apple futures for the most-traded contract due in October 2019 soared to a seven-month high to 8,888 yuan per ton.

Liu Guangchun, an analyst at Shandong-based brokerage Luzheng Futures, said the current round of price hikes is the mixed result of the driving effects of both the futures market and the spot markets.

“Newly grown apples will arrive at the market in about three months, and the price will be supported by resilient demand,” Liu said.

Luckily for consumers like Zhu, who worries about his wallet as much as his stomach, this round of price increases will cede in about three months’ time.

An official with the National Bureau of Statistics said on May 15 that the factors supporting the price hike will be short-lived and industry experts said ample supply in June, when newly harvested fruit arrives at the market, will alleviate the shortage.