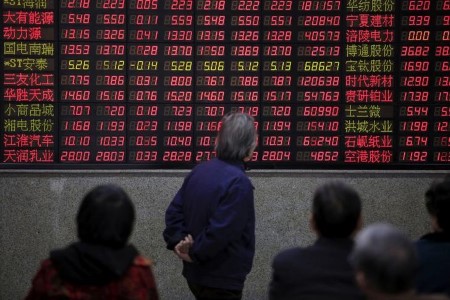 With hundreds of billions of dollars flowing in and targeting a small number of companies, “the accumulative impact should not be underestimated,” Shi said.

Foreign investor interest has heightened as Beijing opened its capital markets wider to woo inbound investment over the past year. In December 2016, China launched the Shenzhen-Hong Kong Stock Connect, broadening a cross-border channel that already linked Shanghai and Hong Kong.

“Global capital is gushing into China,” said Ma Xixun, executive director at asset manger PinPoint. “Foreign investors are realising that being consistently bearish on China is not good for their fund performance.”

Foreign capital worth more than 300 billion yuan has so far flowed into Chinese stocks via the Connect scheme, boosted by strong demand for companies ranging from home appliance makers Midea and Gree, to electricity giant Yangtze Power and diary producer Yili.

The CSI300 index has risen 20 percent so far this year. In contrast, start-up board ChiNext, once the darling of local investors and a hotbed for speculation, has slipped 5 percent.

And both these companies have seen their share price soar more than 80 percent this year.

Investment trends are changing as a result, with the Warren Buffet-style of “buy and hold” investing becoming more popular in a market accustomed to speculative casino-like behavior, Shi at UBS Asset Management said.

He said the sharp rise in companies such as Moutai reflects their rapid profit growth as well as normalisation of valuations from previously ultra-low levels.

“The revaluation of China’s blue chips is just under way, and is far from over.”