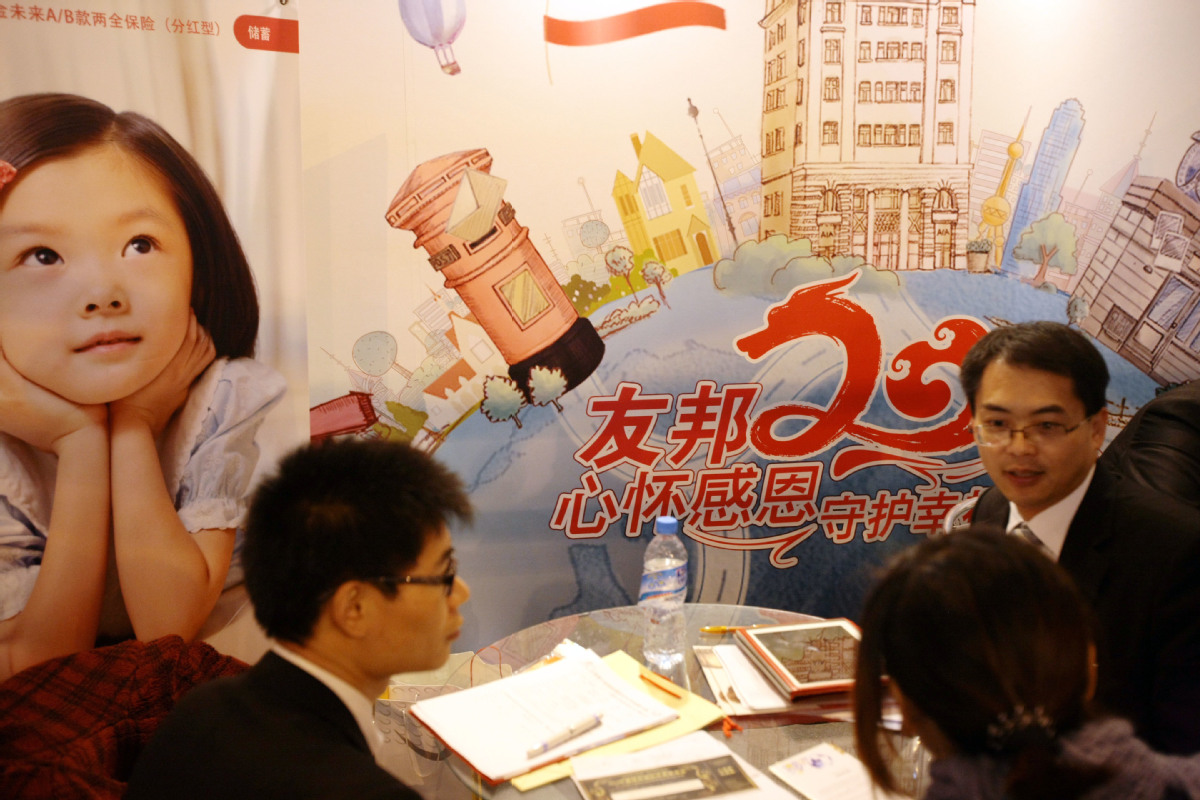 Visitors seek information at the booth of AIA during a financial and investment expo in Shanghai. [Photo by Weng Lei/For China Daily]

Foreign insurance companies have witnessed rapid growth of business in China over the past 70 years, as the country has expanded market access for foreign investors, especially in the financial services sector.

Tracing its roots back to 1919 in Shanghai, when entrepreneur Cornelius Vander Starr began an insurance business, AIA applied for a life insurance license in China in 1990.

For almost a year after the application, AIA did not receive any regulatory response, but things changed after former Chinese leader Deng Xiaoping delivered a series of speeches during visits to several southern cities at the beginning of 1992.

The speeches played a key role in guiding China's reform and opening-up. As a result, the company obtained a license on Sept 25, 1992 and started operations in Shanghai, following many rounds of negotiation.

"AIA has benefited from the opening of China's financial sector regarding our return to the Chinese mainland. Ever since then, our development has benefited directly from the continuous opening of China's business environment. In recent years, we have clearly felt that the government is accelerating steps toward further opening-up," said Fisher Zhang, CEO of AIA China.

The insurer's new sales and service centers in Tianjin municipality and Shijiazhuang, Hebei province, commenced operations at the end of July, under regulatory policies promoting synergistic development of the insurance sector in Beijing, Tianjin and Hebei.

In the first half of 2019, AIA China delivered a strong performance with value of new business up by 34 percent year-on-year to $702 million on a constant exchange rate basis.

During the same period, annualized new premiums grew by 31 percent to $753 million on a constant exchange rate basis as the insurer continued to execute its Premier Agency strategy, which is focused on extensive training and quality recruitment to develop a distinctive agency force well equipped to promote savings and protection solutions.

When AIA China became the first foreign organization to be granted an insurance license in the country, Chinese citizens did not yet have basic knowledge of insurance, and the system of relevant laws and regulations was still far from perfect.

Under these circumstances, the company made the introduction of the insurance agency system to China its top priority, recruiting young people who had different educational backgrounds and dared to innovate.

The first batch of 36 agents included former civil servants, teachers and corporate employees, who went through rigorous training offered by the company on how to develop rich professional knowledge and strong marketing skills.

In the early stages of business, the agents were constantly rejected by Shanghai residents who thought they were swindlers, as the residents were unfamiliar with life insurance products and the marketing strategies.

Later, more and more citizens became aware of insurance due to the agents' publicity and marketing.

"The rapid industrialization and urbanization of China, as well as an emerging middle-income group of consumers, have provided insurance companies with unprecedented opportunities for development and a vast market. AIA is lucky to participate in and witness the fast growth of China's insurance industry. It took less than 30 years for China to complete the evolution of the forms of modern insurance, which were established by Western countries over 200-plus years," said Zhang. 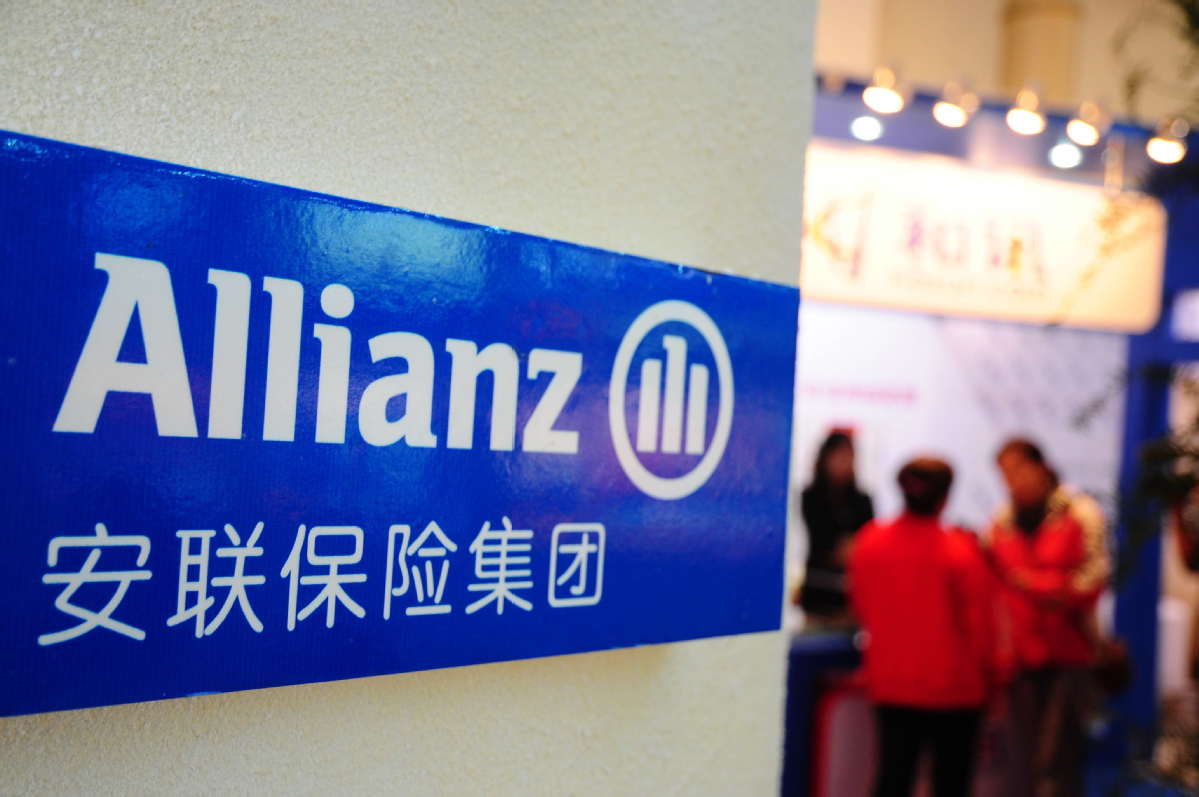 The booth of Allianz SE at a financial and investment exhibition in Beijing. [Photo by Fan Jiashan/For China Daily]

China is the world's second-largest insurance market behind the US. Last year, premiums in China stood at 417 billion euros ($456 billion), contributing 48 percent of total premiums in Asia excluding Japan, said a report issued by Allianz SE, a German multinational financial services company, on May 22.

Ten years ago, the size of the Chinese market was still roughly a third of the Japanese one in terms of premiums. Today, it is 40 percent bigger than that of Japan, which it surpassed in 2016, according to the report.

Allianz forecasts that China will be the decisive force in global insurance in the years to come, with its global market share set to double over the next decade to more than 20 percent.

China is central to the growth strategy for Allianz Asia, whose focus is to contribute to the continued development and innovation of China's fast-growing insurance sector to better serve Chinese customers and communities.

With this in mind, Allianz and JD reached an agreement last year on JD's 483 million yuan ($68 million) investment for a 30-percent stake in Allianz China General Insurance Company Ltd. After the deal, Allianz SE's shareholding in the digital general insurance business dropped from 100 percent to 50 percent as three other new investors took up a combined 20-percent stake.

Leveraging JD's position as one of China's leading e-commerce players, the partnership will drive the insurer's efforts to reach an increasingly digitally savvy demographic.

Starting from 2017, China has ramped up efforts to further open the financial markets to foreign companies. The China Banking and Insurance Regulatory Commission in July announced a series of new opening-up measures to optimize the business environment for foreign investment in the financial sector, enrich the market supply and enhance market competitiveness.

The commission will entirely remove the cap on foreign ownership for life insurance companies by 2020, a year earlier than originally planned. It will also allow foreign investors to hold more than 25 percent stakes in insurance asset management firms.

"The new round of opening-up measures for the insurance industry announced by top Chinese regulators has signaled more development opportunities for foreign insurers. The new measures will bring more institutional players into the market to provide more diversified and superior products and services to the Chinese market," said Zhang Kai, chief executive officer of Manulife-Sinochem Life Insurance Co Ltd.

As the first Sino-foreign life insurance joint venture, Manulife-Sinochem has expanded its footprint across 51 cities in China over the past 23 years.

To date, the insurer has been providing holistic health and retirement solutions and insurance services to 1.7 million customers through multichannels of professional agents, digital platforms and bancassurance, an arrangement between a bank and an insurance company allowing the insurer to sell its products to the bank's client base.

A growing number of foreign insurance companies will benefit from the measures to further open up China's financial sector.

"This is a significant milestone for us to anchor Allianz Group's long-term commitment to China by enhancing its strategic and financial flexibility to capture business opportunities and drive long-term success in the market, to expand our presence and enhance flexibility to increase investment in the fastest-growing insurance market in the world," said Solmaz Altin, regional CEO for Asia-Pacific at Allianz.

"We welcome efforts made by the Chinese government to further open up and encourage investment in China by foreign financial insurance institutions. For Allianz, this means local customers will be able to take advantage of our comprehensive financial and risk management solutions and services, and benefit from the continued growth and liberalization of China's financial markets," said Altin.

Hu Yuanyuan and Li Xiang contributed to the story.