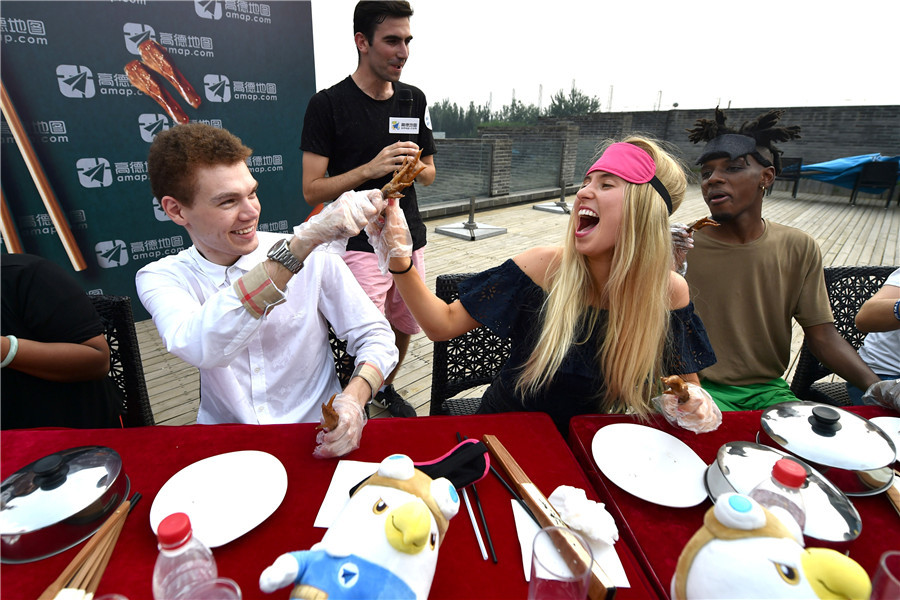 Amid the gloom-and-doom scenario created by the novel coronavirus outbreak, Raz Galor, 26, an Israeli internet celebrity, showed how emerging individual-powered digital content business, which is popular with the younger generation, could make a difference to the society.

Known as Gao Yousi in China, Galor won many a Chinese heart for using his fame among netizens to help organize materials that were badly needed in epidemic-stricken areas. Part of his largesse were 100,000 surgical masks－a gesture that instantly struck a chord with his legions of fans in China.

Gao's act of kindness also shone the spotlight on foreigner internet celebrities, or wanghong, who are often very young, and are blazing a trail in China's digital content economy, creating a market worth hundreds of millions of dollars.

For instance, Gavin Thomas is all of 9 but can be considered an internet veteran with seven years' experience as an online celebrity. Thomas' personal account on Weibo, a Chinese social media network akin to Facebook, commands 2.42 million followers and over 100,000 daily views.

Gao and Thomas represent a new generation of netizen darlings whose business model is characterized by the ability to attract millions of eyeballs through compelling digital content, and then monetize that popularity.

Thomas, who hails from Minnesota in the United States, endeared himself to Chinese netizens by uploading dynamic images called gifs that show him making faces or flashing fake smiles.

His gifs, or stickers, which could be considered intellectual property or IP, have been used more than a billion times across various social media platforms in the country.

These days, once a face becomes popular online, it becomes a money-spinner－and a new celebrity business is born.

Typically, an online celebrity can earn money directly by selling his or her IP. If he or she chooses to produce short videos featuring miscellaneous or funny content, the platforms that host it may share any related revenue from advertising.

Besides, internet celebrities are offered as eye candy to visitors at product launches and other corporate events, a service they perform for a handsome fee.

They could even push, or subliminally advertise, certain products like gadgets, fashion or accessories through their videos or images. And once they gain traction, celebrities could even produce and sell their own products, making more money.

Thomas certainly has. He has been inundated by invitations for appearances at so many events that his local agent has become very protective and discerning, picking and choosing carefully. The idea is to regulate the number of invitations so that the life and education of the 9-year-old are not unreasonably disrupted.

Two factors are stoking the rapid development of the wanghong economy in China: the humongous community of netizens; and the state-of-the-art internet infrastructure, crowned by 5G that facilitates rapid uploads and downloads of big-size content files.

In a sense, the wanghong economy appears to create fresh hopes at a time when doubts were being raised about the sustainability of a business dependent on alternative celebrities.

Such hopes are linked to online celebrities such as Bart Baker of the United States where he boasted some 10 million fans on YouTube. But he shifted his focus to the China market on hearing about its growth potential.

Similarly, Germany's Thomas Derksen or Afu, 31, hit pay dirt in China through his e-documentation of his life and times in Shanghai. Afu was even invited to join the delegation that accompanied German President Frank-Walter Steinmeier during his visit to China in 2018.

According to a report in Beijing's Global Times, which quoted a scholar from the Free University of Berlin, China is now the engine of the global wanghong economy and is also its largest market which, according to the Chinese Academy of Social Sciences, generated more than $7.9 billion in revenue last year.

"For Chinese, watching the content of foreign wanghong generates a refreshing, feel-good factor. It's like a newborn seeing itself in the mirror for the first time," said Yang Qiguang, a researcher from Columbia University's Tow Center. 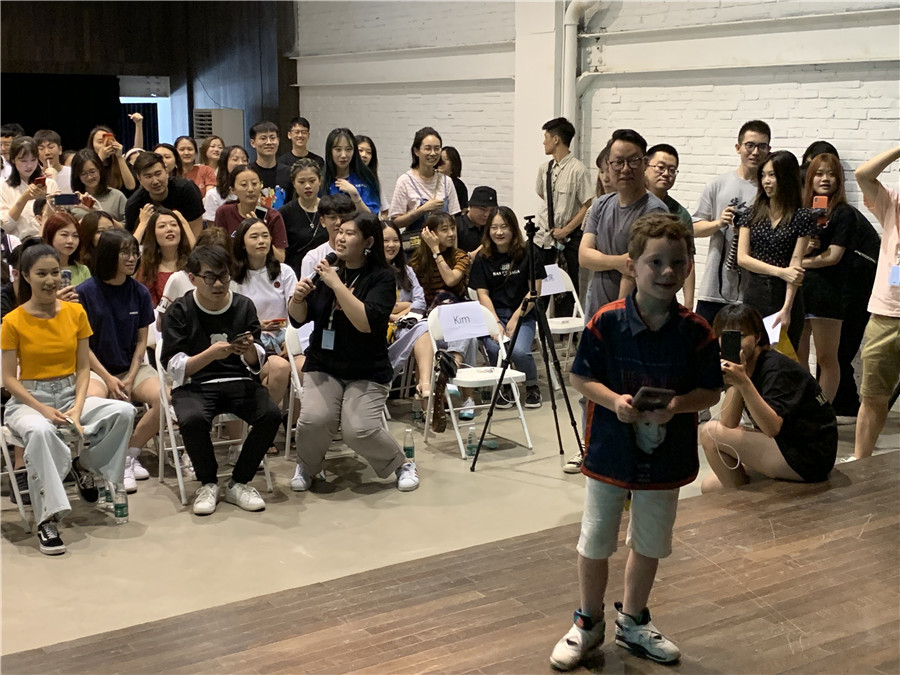 Nine-year-old Minnesota boy Gavin Thomas (front), known as the fake smile kid, interacts with the audience in Beijing on June 15, 2019.

"A natural curiosity as well as a connection will propel a large group of Chinese users to follow the digital content that foreign wanghong create," said Yang, who is now pursuing a PhD in journalism and communication at the Renmin University of China in Beijing.

Two biggest hits of Bart Baker are the English version of a Chinese song and Huawei's ad jingle in Chinese. In his videos, Afu speaks fluently in a Shanghai dialect and focuses on unique Chinese achievements, like digital payments.

The foreign wanghong's distinct and different perspectives on life in China appeal to the younger generation as such content happens to be in line with China's mainstream youth culture, Yang said. It's the same culture that can quickly create a large user base in a short time.

For instance, the way Thomas fakes a smile resonates with local audiences because they can relate to uncomfortable situations in real life wherein they, too, force themselves to smile, to be polite.

Galor became popular in late 2017 when he started to make a video series called The Foreigners Research Institute. Each episode is no longer than five minutes, and features on-street interviews with expatriates in China on cultural quirks and the latest trends.

Galor attributed the success of his videos to the fact that they coincide with the advent of "foreigner 2.0", a term he uses to describe the younger generation of expats now in China.

"This group of people are open to contemporary Chinese society, can speak Mandarin and understand the subtleties of Chinese humor," he said.

So, younger audiences are more open-minded about foreign internet celebrities in China. Given the size of such audiences, even a kid such as Thomas could earn 10 million yuan ($1.43 million) annually.

For the record: he has already cooperated with e-commerce companies in selling products like mobile phones, mugs and shells.

Jerry Kowal, an American with a popular video channel in China, is estimated by some local platforms to earn 600,000 yuan to 1 million yuan annually from just one short video platform.

Baker belongs to this league. Two weeks after he moved to Shanghai, he bagged an ad for which he reportedly received over 800,000 yuan－much higher than his takings over a 10-month period prior to this move to China.

In a sense, the wanghong economy is riding piggyback on a wave created by China's own internet celebrities who rewrite the rules of marketing, branding and e-commerce, experts said.

Technologies like live streaming have created thousands of broadcasters on e-commerce and short-video platforms that cater to a large group of consumers, especially the young.

A 10-minute sponsored broadcast featuring Li Jiaqi, dubbed Taobao's king of lipstick, on Taobao's livestreaming platform could set back an advertiser (say, a lipstick-maker) by 100,000 yuan. Li apparently charges 60,000 yuan for other cosmetics or personal care products and 30,000 for food products.

"In China, internet celebrities attract a lot of attention, which can easily translate into cash through online advertising and e-commerce," said Ding Chenling, founder of Redbang, a consulting company in Beijing.

Sun Jiashan, a researcher with the Chinese National Academy of Arts, said: "The thriving scene is also a sign of consumption upgrade in China, where an increasing number of people have the wherewithal to spend on experiences."

"The business success of domestic net celebrities seemed to have inspired foreigners. Like the key opinion leaders or KOLs in the traditional internet area, foreign wanghong have created a new communications and consumption story in the mobile internet age in China," said Yang Qiguang from Renmin University of China.

"Consumers' curiosity and sense of immersion have helped increase the frequency of interactions with celebrities and thus the possibility of buying things that the latter promote," Yang said.

Shen Yi, a professor with Fudan University in Shanghai, cautioned that the sudden boom could entail some problems like improper content getting online.

"The wanghong economy is like a newborn in the era of mobile internet development. There are no timely regulations yet. More effective supervision would help regulate the sector."

Sun from the Chinese National Academy of Arts said fame can be short-lived unless the celebrities concerned associate themselves with top-quality products and services.