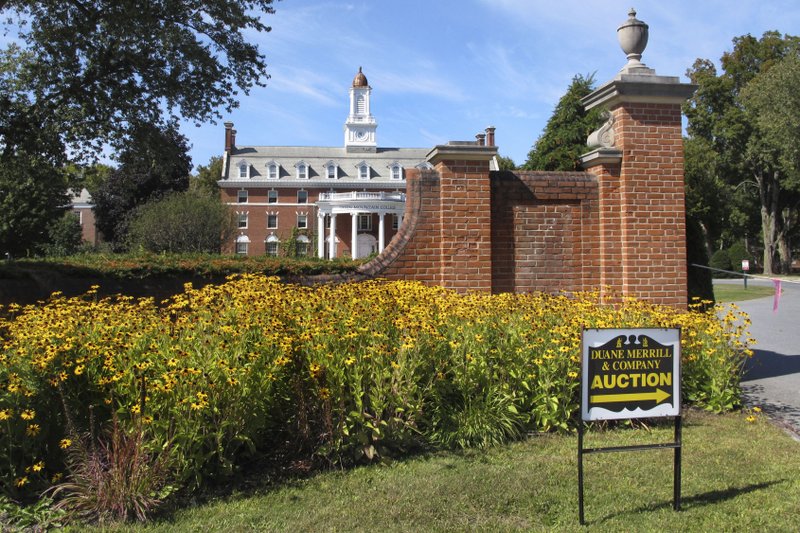 In this Friday, Sept. 20, 2019 photograph, a sign points to an auction at Green Mountain College in Poultney, Vt. The school closed in May and now its hometown is awaiting to hear what will become of the campus. (Photo: AP)

As colleges and universities come alive this fall, some campuses sit closed and empty after succumbing to a recent wave of fewer students and financial challenges.

Now communities that long hosted those historic institutions and relied on them for an economic boost — and their very identity — are left to adapt to the vacancy and wondering what comes next.

In Poultney, Vermont, population 3,300, Green Mountain College had occupied a prominent spot at the end of the main street for 185 years. That changed in the spring, when the environmentally minded liberal arts school closed after commencement, citing a drop in enrollment and financial challenges.

The closure “literally changed the entire town of Poultney,” said Mel Kingsley, who runs Mel’s Place Hair Salon, several blocks from campus, and got 30% of her business from students.

“The town came alive every time the students came back, and you can feel the difference,” she said.

Besides the day-to-day loss of students and school employees, communities also lose the graduates who stick around.

Sophia Vincenza Milkowski, of New York City, graduated two years ago and stayed in Poultney because she liked it so much.

“We’re still trying to figure out what Poultney even is now without it there,” she said during a break from work at a taco restaurant.

“We’re all feeling its absence,” she said, “whether we were a part of the college or not.”

Across the country, 71 private nonprofit colleges and universities have closed since 1995, including schools that announced they would shutter in June 2020, according to the National Association of Independent Colleges and Universities.

Just 12 independent institutions have opened in that period, while 29 have merged, the association said.

Schools have grappled with a shift toward more career-oriented training and a decline in the number of college-age students. Now towns are left dealing with the fallout.

In Bristol, Virginia, the campus of the former Virginia Intermont College has stood vacant on the edge of the small city for more than four years.

“When you lose a significant number of people that’s coming into your downtown area on a daily basis, that does hurt the local surrounding businesses by virtue of students not spending cash and buying food or goods that they would have normally bought when they were here in town,” said Randy Eads, the city’s manager and attorney. “So that has had an impact on some of the local businesses, which in turn has an impact on city revenue.”

Hiwassee College closed in the spring in rural, mostly white Madisonville, Tennessee. Not only will the community be losing one of its largest employers, but also “one small but important window into a larger, more diverse world,” wrote Roland King, former spokesman for the National Association of Independent Colleges and Universities, in a newspaper editorial.

In urban areas, some private colleges that have closed have been taken over by larger institutions, or developers.

This month, the Newbury College campus in the Boston area sold for $34 million to investors in senior care housing and medical office-related projects.

The city council in Denver have approved a general vision for the redevelopment of the former Colorado Heights University in Denver into mixed uses, including housing with new public gathering spaces.

New fits for shuttered college campuses in smaller cities could be harder to find, leaving those communities in limbo.

There is hope in Bristol, where a Chinese businessman and his company, U.S. Magis International Education Center, bought the shuttered Virginia Intermont campus and want to open the Virginia Business College next fall.

In Vermont, besides Green Mountain College, the shuttered Southern Vermont College is also up for sale, and the College of St. Joseph in Rutland is trying to reinvent itself into a professional training and education center after it lost its accreditation last spring.

There’s interest in the Green Mountain College campus but no deals have been signed, said Robert Allen, the last serving president of the school.

Down the street, the customer count is down at Bob Williams’ hardware store, where students would buy fans and desk lamps and college maintenance workers would sometimes be in several times a day.

“We’re anxiously looking forward to having something take over,” Williams said.