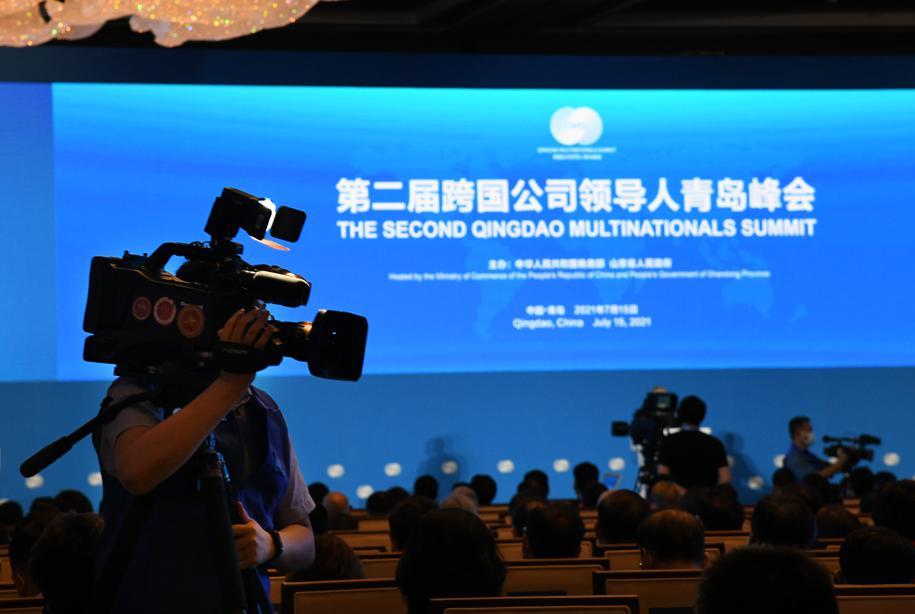 The second edition of the Qingdao Multinationals Summit kicked off on Thursday in Qingdao, Shandong province. (Photo: Xinhua)

Statistics from the Shandong Provincial Department of Commerce showed that the actual use of foreign trade in Shandong hit $8.32 billion in the first five months of this year, an increase of 70.7 percent year-on-year, 30.9 percentage points higher than China's average.

Shandong has made remarkable achievements both in the scale and quality of foreign capital utilization in the 13th Five-Year Plan (2016-20) period, partly due to the rising numbers of Global 500 companies in the province.

During this period, Shandong's actual utilization of foreign capital totaled $67.56 billion, 1.9 times that of the 12th Five-Year Plan (2011-15) period. The actual use of foreign capital in each city in the province surpassed $100 million.

By 2020, 219 Fortune Global 500 companies in Shandong from 23 countries and regions had invested and set up 812 enterprises, covering all the cities in the province and creating jobs for 300,000 people.

Global 500 companies such as SK Holdings, Hyundai, GS Caltex Corporation, Kia Motor and CJ from South Korea, and Itochu, Softbank, Hitochi, Aeon and Sharp from Japan have started businesses in Shandong, lifting the quality and level of Japanese and Korean capital usage in the province.

Moreover, Fortune Global 500 firms also helped promote the upgrading of industries in the province. Their investments in Shandong have expanded from traditional manufacturing to emerging industries.

Sixteen of the world's top 500 companies set up branches in Shandong for the first time during the 13th Five-Year Plan period and their foreign investment was mainly focused on the fields of next-generation information technology, machinery manufacturing, food production, and new energy. These companies include Johnson Controls, IBM, SoftBank, Bosch and Louis Dreyfus.

The foreign investment increased in Shandong thanks to the province's continuous efforts in creating a favorable business environment and providing more opening-up platforms.

In the past five years, Shandong has hosted a series of international events including the first Qingdao Multinationals Summit, the Conference of Great Business Partners, and the "Connecting Shandong with Fortune Global 500" serial event, which enhanced its international influence. More policies have since been issued, improving services for foreign-invested enterprises.