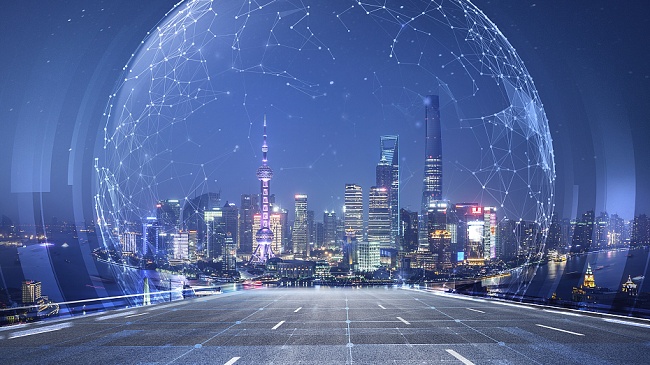 As China grows stronger on the world stage, Chinese enterprises have become an indispensable part in promoting global economic development. The number of Chinese enterprises on the Fortune Global 500 has increased in recent years and surpassed the U.S. this year.

A total of 133 Chinese companies (including those from Hong Kong and Taiwan) are among the 2020 ranking, compared with 121 American companies, a result of 25 years of painstaking efforts from 1995 to 2020.

"When the Global 500 list first came out in 1990, there were no Chinese companies on the list. Three decades later, the Chinese economy has skyrocketed," said Fortune editor-in-chief Cliff Leaf. 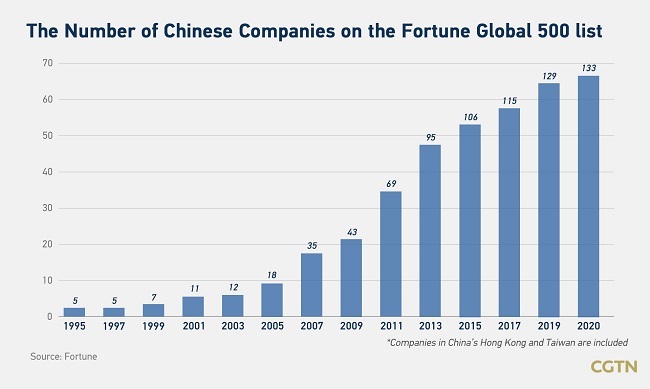 Three of the world's top 10 companies on the list are from China, namely Sinopec, State Grid and China National Petroleum, two from the United States, and the other five from the Netherlands, Saudi Arabia, Germany, the United Kingdom, and Japan. 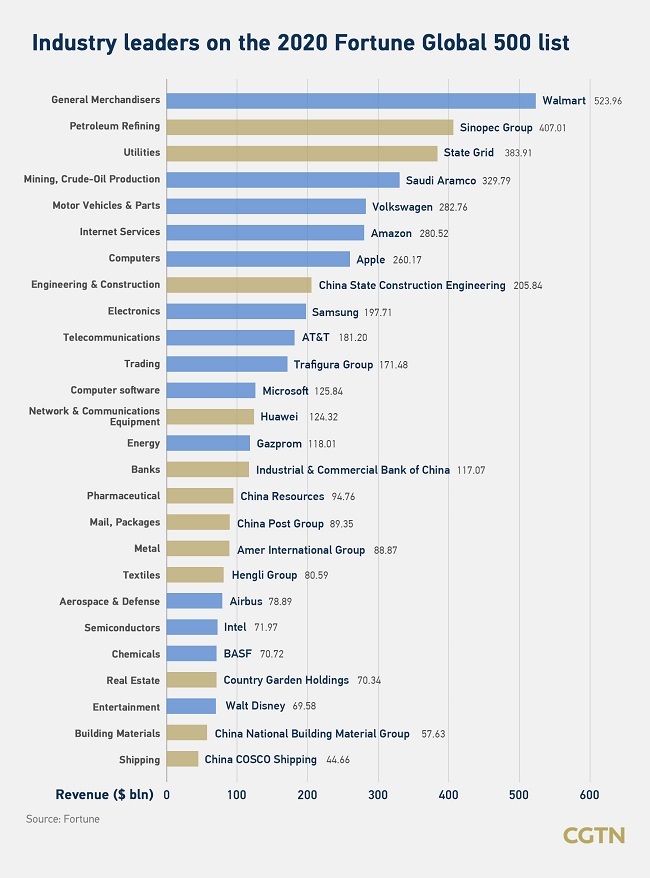 The growth of internet companies that set the pace in the Internet era has become the focus of attention. Five of the seven internet-related companies on the list are from China, including Huawei, Alibaba Group, Tencent, JD.com, and Xiaomi.

Although under external restrictions, Huawei maintained a growth momentum with its revenue reaching 124.3 billion U.S. dollars. The largest increase in ranking among them is e-commerce giant Alibaba, rising by 50 places. 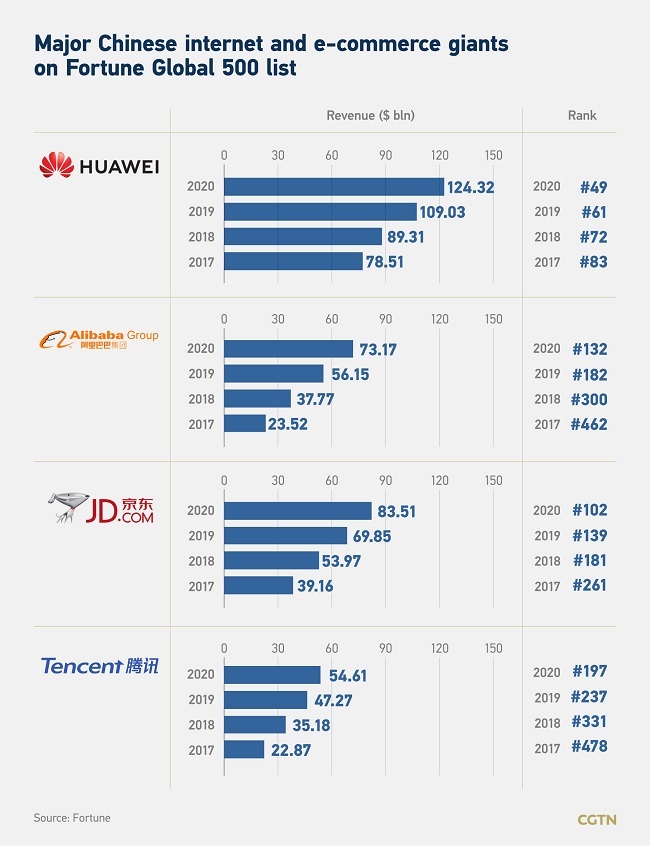 China's real estate industry also witnessed the country's fast growth and the rapid improvement of people's living standards in the past four decades. Five real estate companies are on this year's list, and they are all Chinese companies. Country Garden Holdings moved up 30 spots to the 147th, with a revenue of 70.34 billion U.S. dollars, becoming the leader in the global real estate industry. Its return on equity (ROE) reached 26.2 percent.

Insurance companies moved up with the fastest speed. AIA Group moved up 138 spots, and Taikang Insurance Group moved up 74 spots on this year's list, reflecting a maturing insurance market and people's enhanced awareness of insurance. 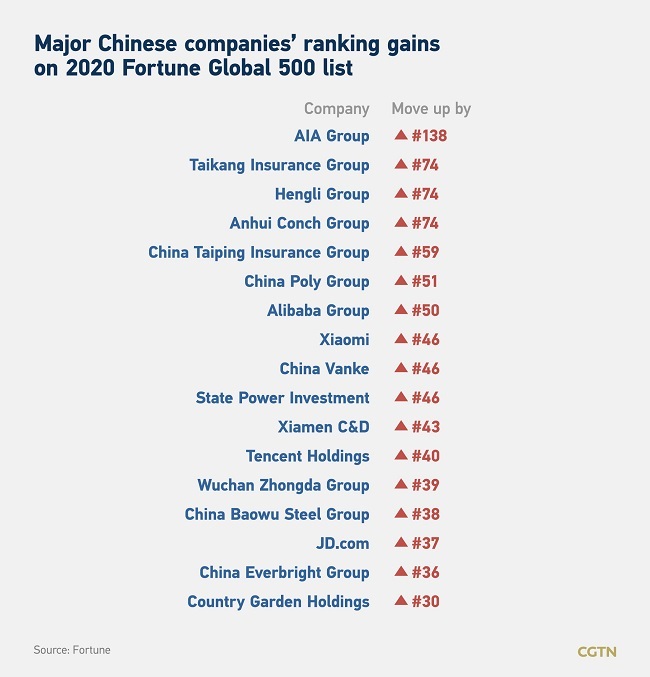 Will China maintain the largest number of enterprises on the list?

"China's economic development has gained great momentum in recent years. In the face of the sudden crash of the COVID-19 pandemic, countries in the world inevitably saw their economy shrink. China became the first country to rise from the pandemic, with its GDP growing 3.2 percent in the first quarter. It is likely to be the only major economy recovering from the coronavirus hit," said Bai. 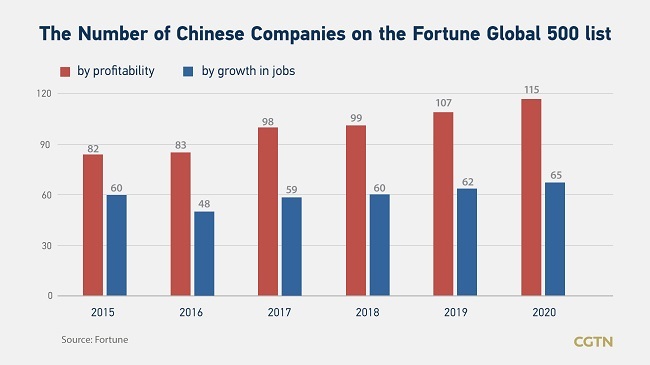 China has become the country with the largest number of companies on the list, so it has laid a foundation, but maybe someday, the U.S. took back its position. Challenges remain due to the uncertainties in the external environment, so China should make more efforts, said Bai.

China should continue to change its way of development, instead of pursuing the scale blindly. Merger and acquisition should conform to economic law to achieve a powerful combination. Meanwhile, the split-up of business in accordance with the actual conditions is also necessary, said Bai. 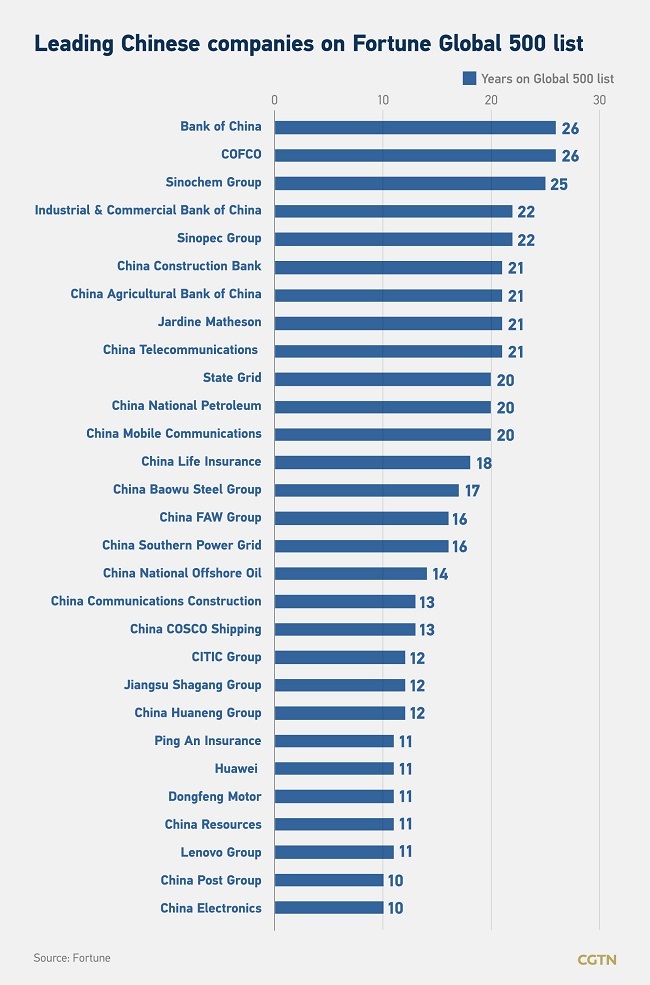 The country should also pay attention to structural issues. Traditional industries still took dominance. A total of 10 Chinese banks have entered the list this year, with the combined profits accounting for 44 percent of all Chinese mainland companies on the list. Although the proportion was greatly reduced compared with the 50 percent in previous years, it is still high.

More Fortune 500 companies with technological edges and brand effect are expected to be created in the future and cover more areas such as information technology e-commerce, and internet-based new retailing, said Bai.