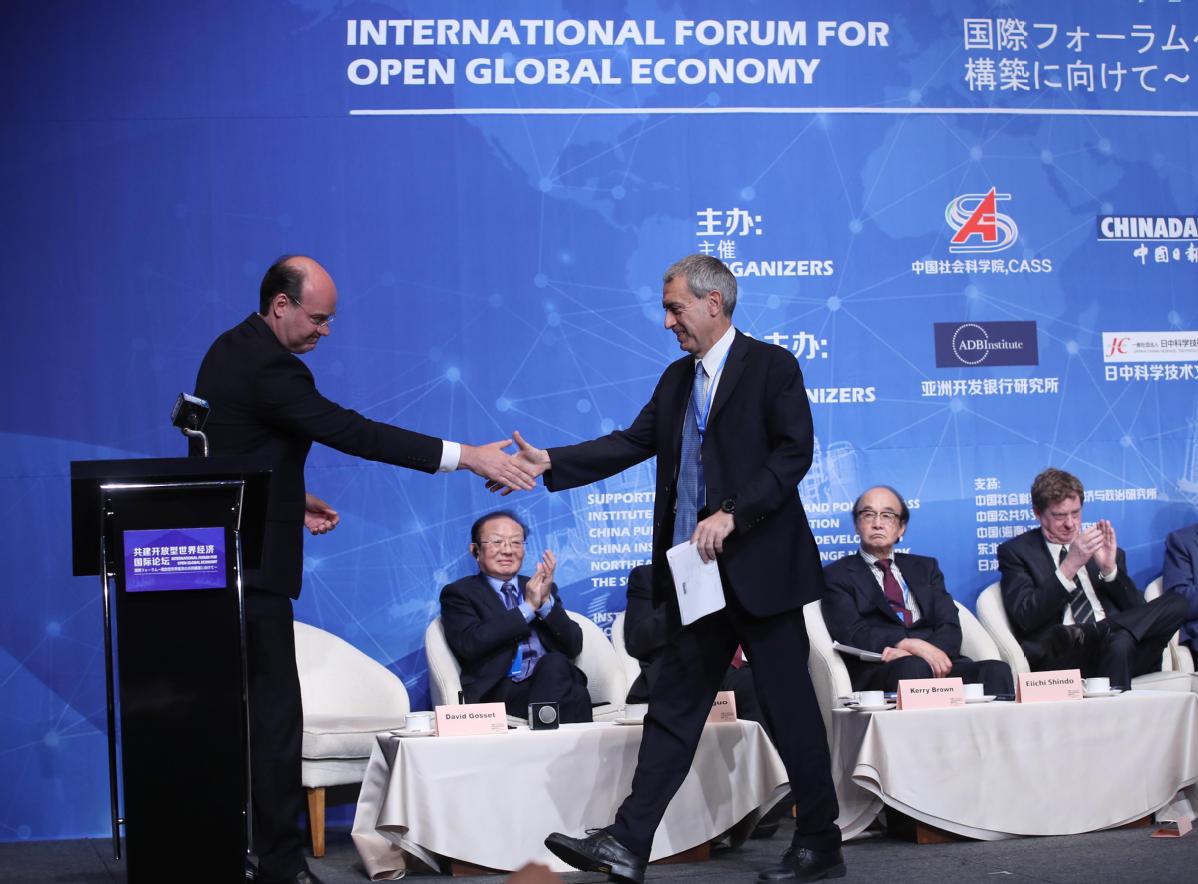 Proactive action to mitigate trade tensions and embrace an open global trading system are urgently needed to help the world's turbulent economy get back on track, experts said at a forum ahead of the 2019 G20 summit.

The forum, co-organized by China Daily and the Chinese Academy of Social Sciences, was held on Tuesday in Osaka, Japan.

The International Forum for Open Global Economy was held days before the highly anticipated meeting between President Xi Jinping and United States President Donald Trump on the sidelines of the two-day summit, which begins on Friday.

Observers see the expected Sino-US meeting as a breakthrough in the contentious bilateral trade negotiations and an opportunity to ease friction.

Guo Weimin, vice-minister of the State Council Information Office, said at the forum that China will coordinate with other countries under the G20 mechanism to seek new growth momentum for the global economy.

Given the difficulties and governance challenges the world is facing amid rising protectionist and isolationist ideologies, "Cooperation is the best choice for China and the US", Guo said. "We hope the two countries walk in the same direction in managing differences based on mutual respect and cooperation based on a win-win foundation."

On Monday, the World Trade Organization warned in a report that new trade barriers imposed by G20 economies during the past eight months may affect goods worth $335.9 billion. That was another strong signal of economic downside risk after the World Bank and the International Monetary Fund downgraded projections for global growth.

In an environment characterized by uncertainty and the contraction of trade and investment, an open economy could be consolidated by multilateral mechanisms that advocate policy coordination, innovation and inclusive development, Xie Fuzhan, president of the Chinese Academy of Social Sciences, said at the forum.

"The US, which once was a supporter of free trade, is now turning against an open global economy and multinational cooperation. That is the root cause of the deteriorating international trade environment and an obstacle in Sino-US trade talks," Xie said.

China, on the other hand, will continually deepen opening-up and push forward domestic reforms, Xie said. He forecast that over the next 15 years, China will import $24 trillion in goods, attract $2 trillion in foreign direct investment and invest $2 trillion overseas, indicating that the country's opening-up will offer greater development opportunities for the world.

Yoshitaka Murata, president of the Japan-China Science, Technology and Culture Center and former chairman of the National Public Safety Commission, expects the world's two largest economies to find a chance this week to mitigate tensions.

"The US has shaped the value of globalization and benefited the most from the integrated world economy, and I believe the US will ultimately turn back to globalization," Murata added.

Zhou Shuchun, publisher and editor-in-chief of China Daily, said at the forum that multilateralism is the key to coping with global risks and challenges, and free trade is crucial for promoting development and stabilizing global economic growth.

The G20, which was established in response to the global financial crisis, is expected to take new measures to further improve global economic governance, Zhou said.

As the host country of the 14th G20 Summit, Japan stated the core mission of the summit as "establishing economic fundamentals for realizing sustainable and inclusive growth of the global economy", according to a statement on the summit's website.

A consensus to curb the economic slowdown can be achieved when the current factors negatively impacting international trade are addressed, said policy advisers.

Li Tianran, consul general of the Chinese Consulate-General in Osaka, expected the Japanese presidency to promote WTO reform at the summit and steer G20 members toward taking concrete action to strengthen global growth.

A report previewing policy of the G20 Osaka Summit was jointly issued by China Daily's think tank China Watch Institute and the Institute of World Economics and Politics under the Chinese Academy of Social Sciences on Tuesday in Osaka.

It reaffirmed the significance of "building an open global economy" — a concept that was first proposed by President Xi in 2013 when he attended the G20 St. Petersburg Summit.

Experts who contributed to the report agreed that an open global economy is the foundation for facilitating global trade and rules-based governance, and it can boost technological advancement, nurture more high-caliber talent and promote innovation and inclusive development.

The report supports multilateral mechanisms, including the G20 which remains the center of gravity in global governance for tackling complex transnational issues.

"But they should dovetail with regional and subregional mechanisms as well as special arrangements in such fields as finance, infrastructure and climate change," said the report.