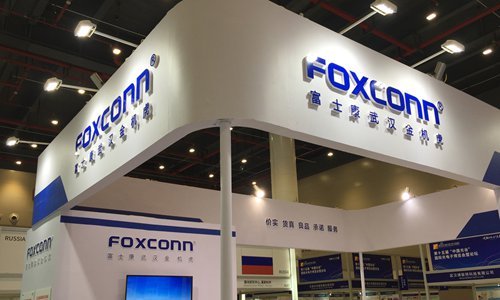 A booth of Foxconn at an exhibition hall in Wuhan, capital of Central China's Hubei Province. (File photo: VCG)

Apple's largest iPhone manufacturer Foxconn has ramped up recruitment in the Chinese mailand for assembly-line workers by almost doubling the bonus for new recruits.

Analysts said that Foxconn may be hiring for the mass production of new Apple products including the iPhone 13, as orders are flowing back to Chinese mainland amid the COVID-19 resurgence in India and other countries.

Foxconn's factory in Zhengzhou, Central China's Henan Province, raised the bonus for new workers to 6,000 yuan ($938.4) from 3,500 yuan per person at the end of May. New workers will get the bonus if they work for at least 55 days within a period longer than 90 days, according to a recruitment ad posted on the official WeChat public account of the Zhengzhou factory on Sunday.

A source close to the Foxconn recruitment sector told the Global Times on Wednesday that some Foxconn factories in China even provide an extra bonus of 10,000 yuan if new recruits agree to work for at least 150 days.

"The labor shortage is serious. Recruitment hasn't stopped since the beginning of the year," the person said.

Luffy Lin, chief analyst for Witdisplay, an electronics industry consulting platform, told the Global Times that Foxconn may step up hiring for the mass production of new Apple products, including the iPhone 13, to guarantee supply when those products hit the market.

"Previously, some of Apple's orders - for example for the iPhone 12 - went to India, but the raging pandemic in the country disrupted supply chains and production. Thus, most new Apple orders will be given to Foxconn factories in China," Lin said, noting that at least Foxconn factories in Zhengzhou and Shenzhen, South China's Guangdong Province will probably make the iPhone 13.

Analysts in the Chinese mainland forecast in a recent note that the iPhone 13 series will be released in September, and new products are expected to maintain a sound sales performance. TSMC has begun mass production of A15 chipsets for Apple, and the manufacturing of other Apple components will accelerate in the second half.

"The iPhone 13 devices will probably come with faster 5G, while the camera, display and a bigger battery are also expected to be stellar," Lin said, noting that sales should be considerable.

Magirror Research projected that shipments of the new iPhone 13 series will reach 45 million sets in 2021.

A source with Foxconn told the Global Times on Wednesday that some supply chains, including those for making iPhones, have moved back to the Chinese mainland due to the pandemic surge in India. This isn't a temporary move but one that will last for six months or even one year, the person said.

According to Apple's latest supplier responsibility progress report, its new suppliers in 2020 were mostly from the Chinese mainland. The number in that category rose by 12, compared with 2019.

It's estimated that another four or five Chinese mainland suppliers will join the company's supply chain this year, as a more stable supply chain in the country offers guarantees to Apple.