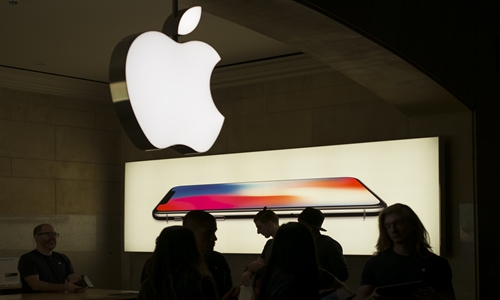 Some of Foxconn's factories in China that make iPhones are cutting recruitments by up to 60 percent due to dwindling overseas phone orders as the COVID-19 rages globally, the Global Times learned.

The situation, coming amid a broad work recovery in China, sheds light on how Apple, the largest client of Foxconn, could face a second hit to its business as its stores outside China remain shut because of the virus attack. An analyst estimated that the global pandemic could wipe out more than10 percent of Apple's world sales this year.

The person did not specify which foreign clients cut orders. But the plant, said to be the world's largest iPhone factory, mainly assembles iPhones for Apple. The US giant technology company is Foxconn's largest customer, accounting for 70 percent of its yearly orders, according to media reports.

Another HR manager surnamed Ding, from Foxconn's factory in Taiyuan, North China's Shanxi Province, told the Global Times on Tuesday that the company now employs only 400 workers a day, compared with 1,000 in the same period last year. Ding said that the Taiyuan factory also assembles iPhones.

But he noted that employees at the Taiyuan factory are working overtime, without giving a reason. Some insiders speculate that the factory is ramping up mass production for the iPhone 12, which is expected to be released this fall.

Liang Zhenpeng, a senior industry analyst, told the Global Times on Tuesday that it is rare for Foxconn to cut hiring early in the year.

"The manufacturer usually scales up employment at such a time. The unusual move may be due to expectations that orders from Apple may slip further in the next three to six months," Liang said.

Foxconn said in a statement sent to the Global Times that its recruitment process has been running smoothly in China. "Our facilities in China have returned to full seasonal capacity much earlier than previously projected."

Apple told the Global Times that it has not comment on the matter.

At the height of the epidemic in China, Apple's business was hit by an acute labor shortage in its supply chains, the Global Times learned.

Now, COVID-19 has eased in China and production bounced back. But Apple now faces mounting uncertainties due to fast-growing cases overseas. Apple's stores outside China have had to close temporarily, and logistics networks in most other markets have been disrupted.

Liang estimated that the deadly virus will squeeze Apple's global sales revenue by at least 10 percent and complicate the company's efforts to launch new products.

"If the epidemic is not controlled before the first half of 2020, market demand will remain dismal, and no one will be interested in buying Apple's new product," Liang said. He added that Apple's competitiveness in China - where the virus has faded away - is also threatened by Chinese vendors Huawei and Xiaomi.

In 2019, Huawei overtook Apple to become the world's No.2 smartphone maker in terms of global market share, according to Canalys. Huawei accounted for 17.6 percent while Apple accounted for 14.5 percent.