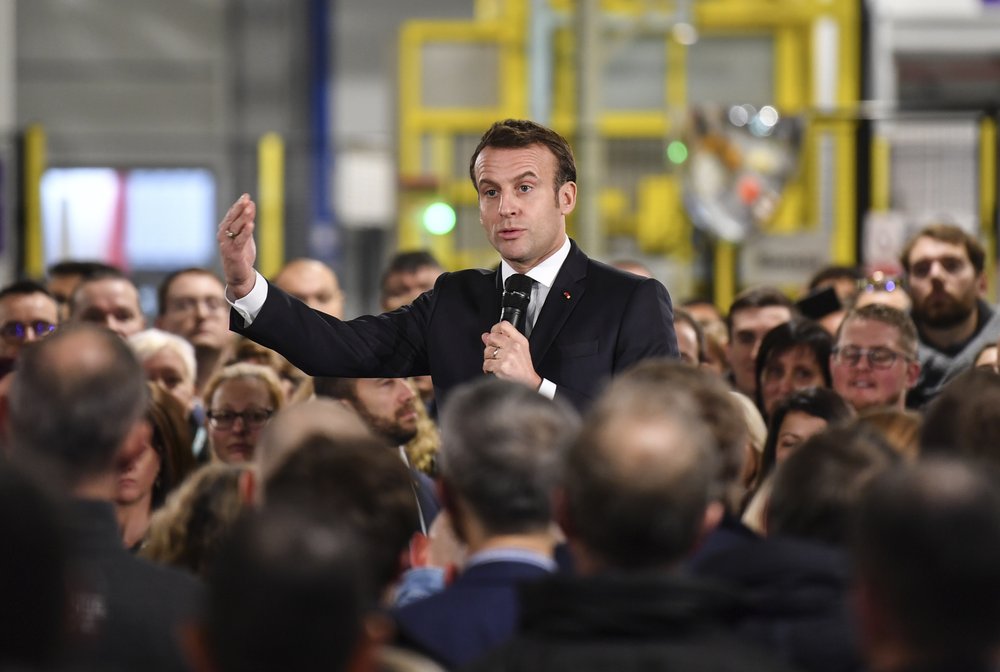 France’s president is taking on the role of salesman in chief for his strike-battered country.

Emmanuel Macron used the splendor of the Palace of Versailles to woo international business leaders on Monday, insisting that his reforms are attracting investors despite six weeks of crippling protests and walkouts over his plan to overhaul the retirement system.

Driving home the message that the eurozone’s second-largest economy remains open for business, Macron’s government announced a 2 billion-euro ($2.2 billion) contract for the French shipyard of Saint-Nazaire on the Atlantic coast. It will build two cruise ships for the company MSC, representing some 2,400 jobs over three years. MSC confirmed plans to build other ships in France for another 4 billion euros ($4.4 billion).

“Good news doesn’t arrive out of nowhere. It comes because we are implementing reforms, because our country is moving, mobilizing,” Macron said. “I know that our heads are being filled with bad news and that we’re led to believe that everything is going to explode. But it’s not true.”

Macron delivered those comments to workers at a plant of British-Swedish pharmaceuticals company Astrazeneca in the northern town of Dunkirk, one of his stops on a frenetic day of efforts to convince investors to choose France. Astrazeneca announced $500 million in new investments over the next 5 years.

Coca-Cola said it would invest 1 billion euros ($1.1 billion) over the next 5 years in France, including in its Dunkirk plant.

Japanese automaker Toyota said last week it will build a new car model at its plant in Valenciennes, northern France, which represents 400 jobs and 100 million euros ($110 million) in investments.

“France has become the most attractive country for industrial investments and research and development investments in Europe,” Finance minister Bruno Le Maire told French news broadcaster LCI. “We are attractive for innovation.”

Le Maire acknowledged that Britain’s planned departure of the European Union, which prompted some companies to move some of their business to an EU country, has given a boost to investments in France. “Of course we play on every economic opportunity,” he said.

American bank JP Morgan said it had bought new offices in central Paris, with space to house about 450 employees, to get better access to the EU market after Brexit.

Macron was elected in 2017 on a pro-European, pro-business platform and argued that France must become more globally competitive. He has started cutting taxes on business revenue and passed laws to make it easier to hire and fire workers and make it harder to get unemployment benefits.

For such policies, Macron has faced strikes and protests by French workers. The yellow vest economic justice movement erupted in November 2018 and included street demonstrations for months over the cost of living and perceived social injustices.

In recent weeks, the president’s plan to overhaul the pension system has prompted major transport strikes. Macron says his plan to unite over 40 different retirement systems into one will be fairer for all French workers. People who have special retirement deals are objecting to the changes, and a wide variety of workers are against any moves to raise the full retirement age from 62.

Train traffic was close to normal on Monday and the Paris metro was only slightly disrupted after a major union on Saturday called to suspend the strikes.

The government says labor measures have started producing results and are creating more jobs. France’s unemployment rate has decreased this year to its lowest level in a decade, but at 8.6% it still remains among the highest in the European Union.

The World Economic Forum in its 2019 global competitiveness report - an assessment of the competitive landscape of 141 economies - rated France at the 15, up from 22 in 2017.