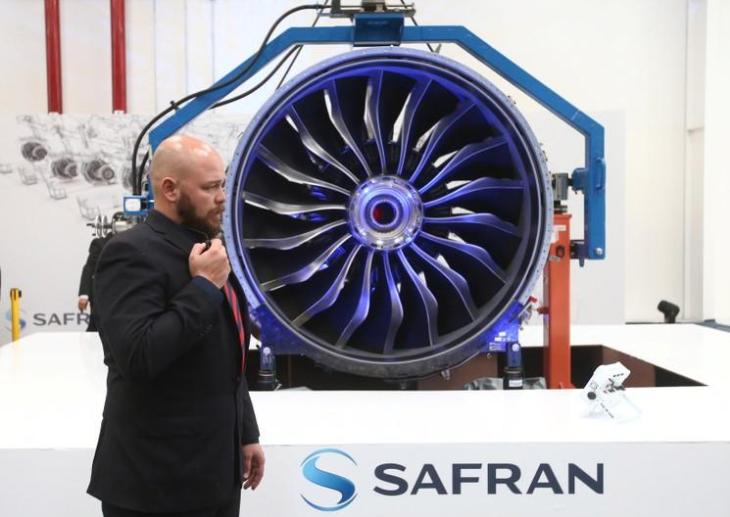 A security guard speaks into a microphone in front of an airplane engine during the inauguration of the Safran Aircraft Engines plant in Queretaro, Mexico, February 21, 2018. Photo: Reuters/Edgard Garrido

The maker of engines, landing gear and optronics also extended Philippe Petitcolin’s term as chief executive by two years to April 2020, as it prepares to absorb Zodiac Aerospace and hike output of its new LEAP jet engine.

Investors shrugged off initial concerns about the impact of the switch to IFRS accounting rules, which drove Safran's shares lower at the open, to push the stock up 0.8 percent in afternoon trading, outperforming a flat Paris CAC40 index.

Safran, which partners General Electric in producing the engines for Boeing and Airbus medium-haul jets, said the cost of transition to the new LEAP generation of engines peaked at 342 million euros ($422 million) in 2017.

That surprised some analysts who had expected the cost of weaning the company off the profitable CFM56, the world’s most-sold jet engine, and offering discounts to introduce its successor would stay relatively high or keep rising this year.

However, Petitcolin expressed caution about possible further increases in output by Airbus and Boeing to meet demand for medium-haul jets, saying he would wait until the beginning of next year before committing to higher engine production.

“By the end of 2018, we should have the level of reassurance we need concerning the potential for production rates equivalent to 70 aircraft a month (each),” Petitcolin said.

GE-Safran engine joint-venture CFM is experiencing delays of four to five weeks in LEAP production but aims to catch up by mid-year as it targets 1,100 deliveries of the new engine this year, up from 459 in 2017, he added.

Delays are a hangover from quality problems in the supply chain that CFM says have been resolved, but which left a rolling delay that CFM has struggled to absorb as it takes production higher. Problem areas included forgings and now machined parts.

Industry analysts say the disruption remains modest for now compared to delays and technical problems with engines from Pratt & Whitney, which competes with CFM on Airbus jets. Deliveries of Pratt-powered A320neos are currently suspended.

Still, Airbus has shown increasing frustration over CFM delays and its chief executive lashed out at Safran even while Petitcolin was speaking at a news conference on Tuesday.

“It’s nice to read that they have a strong action plan to cut costs on the LEAP,” Tom Enders said in an emailed statement.

“However, it is much more important and urgent right now that Safran and GE recover the program and deliver on time and on quality,” he said.

Safran posted a recurring operating profit of 2.47 billion euros in 2017 on adjusted revenues that rose 4.7 percent to 16.521 billion euros. It raised the dividend 5.3 percent.

Analysts were on average expecting flat operating income of 2.403 billion euros on revenues of 16.272 billion euros, according to an Inquiry Financial poll conducted for Reuters.

Its widely watched civil aftermarket services revenue grew 11.2 percent in dollar terms in 2017 and it predicted 2018 growth in the high single digits.

Separately, French investment company FFP - one of the leading shareholders in carmaker Peugeot - said it had taken up a stake in Safran as a result of the latter’s takeover of Zodiac.

Safran now owns 88 percent of the aircraft seats and cabins supplier and is aiming for at least 95 percent. It acquired Zodiac at the second attempt after the French company hit a production crisis and issued a slew of profit warnings.

The crisis saw Boeing take Zodiac off its list of approved suppliers to airlines, but Petitcolin said the planemaker had now agreed to let Zodiac compete for business on its jets.