With the completed customs clearance documents for 80 imported high-end cars in his hand, Zhang Xiafei arrived at the customs office at the land port of Alataw Pass, Xinjiang Uygur autonomous region. 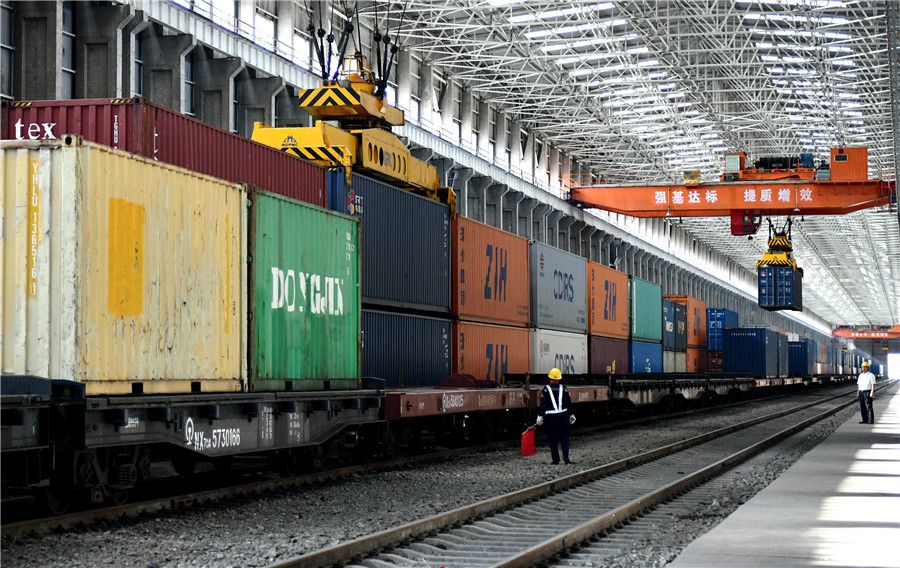 Containers from a train that originated in Poland are loaded onto a train bound for Chongqing, Southwest China, at an indoor transfer station at the Alataw Pass, Xinjiang Uygur autonomous region. (Photo: China news service)

Within minutes, a customs officer had logged all the details required for the vehicles to enter the Chinese market via a freight train service that connects Europe and China.

"These Porsche cars left Poland nine days ago. In a few days, they will arrive in Chongqing. The China Railway Express service is very reliable and punctual. More important, it has helped cut transportation times by half compared with moving the goods by sea," said Zhang, an employee of Jie'an Logistics, a freight company that has used the service regularly in the past year.

The China Railway Express, aka the China-Europe freight train, is a network of rail services that carry cargo between China and Europe via Central Asia. Nearly 70 percent of the trains use the Alataw Pass, a land port in the Gobi Desert on China's border with Kazakhstan.

In March 2011, the first such service left the southwestern city of Chongqing headed for Duisburg, Germany. By the end of last month, 5,900 China Railway Express and China-Central Asia trains had used the border crossing.

The rising number of services and their growing popularity has made Northwest China's largest land port busier than ever.

From January to the end of last month, 851 China Railway Express trains used the Alataw Pass crossing. The value of the freight they carried was $5.2 billion, a rise of 69.6 percent year-on-year, according to the latest figures from the Alataw Pass Customs.

Every day, border security and customs officials deal with large numbers of trains and trucks lined up at checkpoints to be inspected, heading to or coming from countries in Europe and Central Asia. Meanwhile, crude oil is constantly pumped to China from Kazakhstan via a network of subterranean pipelines. 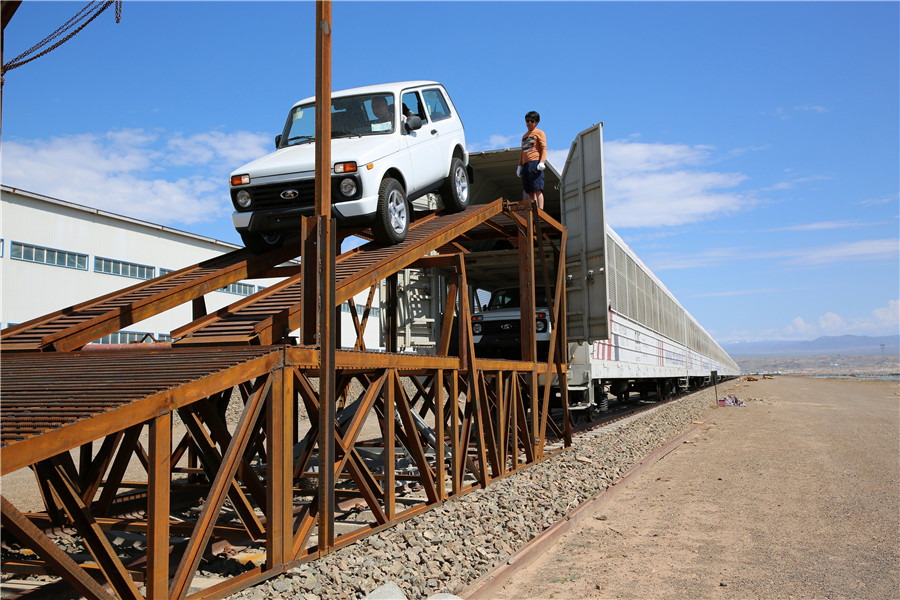 An imported car is unloaded from a freight container at Alataw Pass Station. (Photos: China Daily)

"Since it opened in 1991, the Alataw Pass land port has been famous for strong winds almost all-year-round and for being a strategic entry point for energy products. Now, it's famous for the China Railway Express, and as a trade hub for a range of goods, such as imported cars, agricultural products and alcohol," said Di Yongjiang, Party chief of Alashankou, a city established in 2012 based around the land port.

Wang Chuanjie, head of the Alataw Pass Customs, said: "Since May 2017, the China Railway Express has become a stable and regular service. To provide a better service, we have teamed up with the border security authorities to conduct joint inspections, cutting inspection times by 30 minutes. The customs clearance time has also been accelerated to ensure the efficiency of the train service. Now, trains only need to stop at the port for six to 10 hours, from 12 hours before."

According to Yang Yonghong, head of China Railway Urumqi Group's Alataw Pass Station, the rapid inspection and clearance services for China Railway Express freight trains have led to a rise in imports.

He was speaking at an indoor transfer station where containers from a train that had arrived from Poland (via Kazakhstan) were being loaded onto a train bound for Chongqing. The change was necessary because the track gauge in Kazakhstan is wider than in China.

According to Yang, the indoor transfer station, the largest in Asia, can handle 15 trains a day. Because more trains are expected to pass through the port in the future, the company plans to transform an outdoor transfer station into an indoor facility so the procedure won't be affected by strong winds. The 80 Porsche cars were just one of the cargoes being transferred that day.

"When the China Railway Express was launched, the trains were heavily loaded on their outbound journeys, but most of the containers were empty when they returned. Now, about 70 percent of trains returning to China are also heavily loaded. The change is very obvious," he said.

According to the Alataw Pass Customs, from January to May, only about 30 percent of the containers on China Railway Express trains returning from Europe were empty, a fall of more than 9 percent year-on-year.

Yang said, "As many companies have benefited from the cheaper, but more efficient, service provided by the China Railway Express service, I believe more and more containers will be filled on the trains' return journeys."

"Many businesses have noted the potential of the land port and the city, so they have set up branches and factories here. It's hard to imagine that before 1992 the Alataw Pass was nothing but the Gobi Desert and strong winds," Di, the Party chief, said.

If the railroads and pipelines running through the Alataw Pass are the arteries of the booming crossborder trade, Urumqi, Xinjiang's capital, is working to position itself as the brain.

That goal has been brought within reach by a smart, real-time monitoring system that consolidates freight information and train timetables for the China Railway Express.

The system is located at the Urumqi International Inland Port Area, a railway container distribution center of 67 square kilometers near the outskirts of the city.

Pointing to a giant screen showing trains in operation on a digital map, Ma Chunlei, an official with the port area authority, was unable to hide his pride in the system, which will be officially rolled out in August.

The map is flanked by charts displaying different types of freight, trade volumes for inbound and outbound goods, and the number of trains currently passing through the region.

The highlight of the screen, according to Ma, is that it calculates how many cargo cars are empty and available for reloading during the each train's journey across the Eurasian continent.

"For example, we can tell that this train from Duisburg is scheduled to arrive in Urumqi in two days and it has 10 empty cars," he said, circling the number with a laser pointer.

"The capacity of those 10 freight cars could easily be wasted if we did not have access to such information and could not share it with businesses along the route," he added.

"Thanks to the smart system, businesses in neighboring Kazakhstan can stockpile goods at designated stations (to be loaded) before the train continues on its journey to China."

Seeing trains rushing by with plenty of unused space has long been a sore point for freight train operators and managers, because low utilization of the cargo capacity raises running costs and makes the service less appealing to potential customers.

"The system collects and incorporates the operational information of all the freight trains involved in the China Express Railway into one holistic platform," Ma said.

The inland port cooperates with major rail service providers and customs in Kazakhstan, Russia and Germany, as well as major ticket-booking portals for ferries and railways across large parts of Europe.

"At present, no other trade hub in China is able to amass such a huge trove of data as we do with our system," Ma said.

According to the port area authorities, during a recent trial of the system freight trains returning from the West were carrying goods at an average 80 percent of their full capacity. 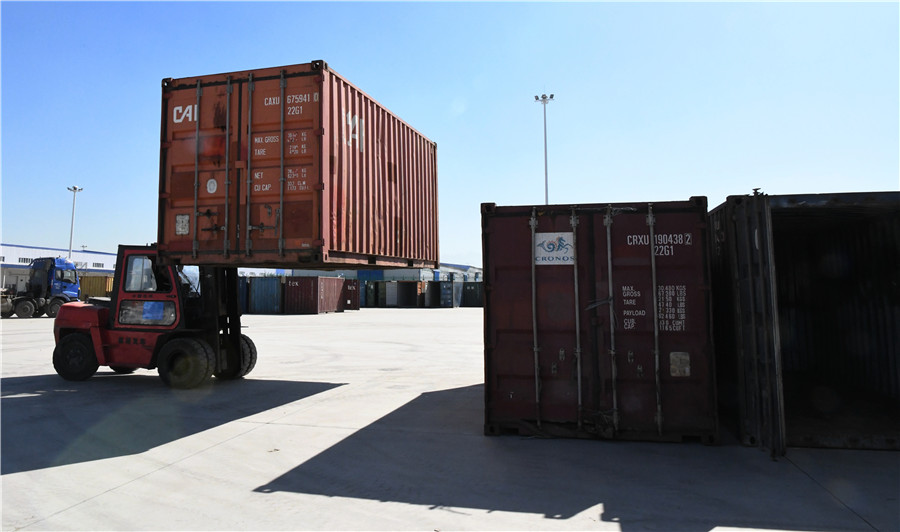 Containers are unloaded at the Urumqi International Inland Port Area in the capital of Xinjiang.

Between 2016 and the middle of this month, more than 2,400 trains had hauled goods across the port area, via about 20 routes of the China Express Railway, and made their way to 25 cities in 18 countries.

In addition to improving the efficiency and connectivity of the China Railway Service, the port area is also expected to provide a major boost for the regional economy.

One of the most popular commodities heading west from Xinjiang is a tomato-based sauce, according to Zheng Weiguo, vice-manager of Urumqi International Land Port Multimodal Transport Co.

"Last year, about 50,000 metric tons of the tomato-based sauce were exported to Russia alone," he said. Behind him, heavy trucks loaded with multicolored containers were revving up to transfer goods onto an approaching freight train.

It can take as long as 50 days for the sauce to reach its farthest destination, Naples in Italy, by sea, setting off from Tianjin Port in North China.

"The express train services have cut the journey time to about 12 days, allowing Chinese agricultural goods to overtake their global competitors," said Liu Shaohua, deputy director of the port area.

"We have already received positive feedback from wholesale buyers overseas, who have praised the rail service for its speed and low rate of damage (to goods). In the future, we plan to further boost confidence in products made in Xinjiang, and expand avenues for overseas sales through the real-time monitoring system and the sophisticated freight rail network."

Liu regards the upgrade of the cross-border rail trade as a pivotal moment in Xinjiang's overall development.

"Its long distance from waterways has seen Xinjiang lag behind other parts of the country for a long time in terms of its performance in global business; but a new opportunity has emerged as the country adds impetus to trade growth via both land and sea," he said.

"We believe that eventually, Xinjiang will blend into the global trade network fully and seamlessly."