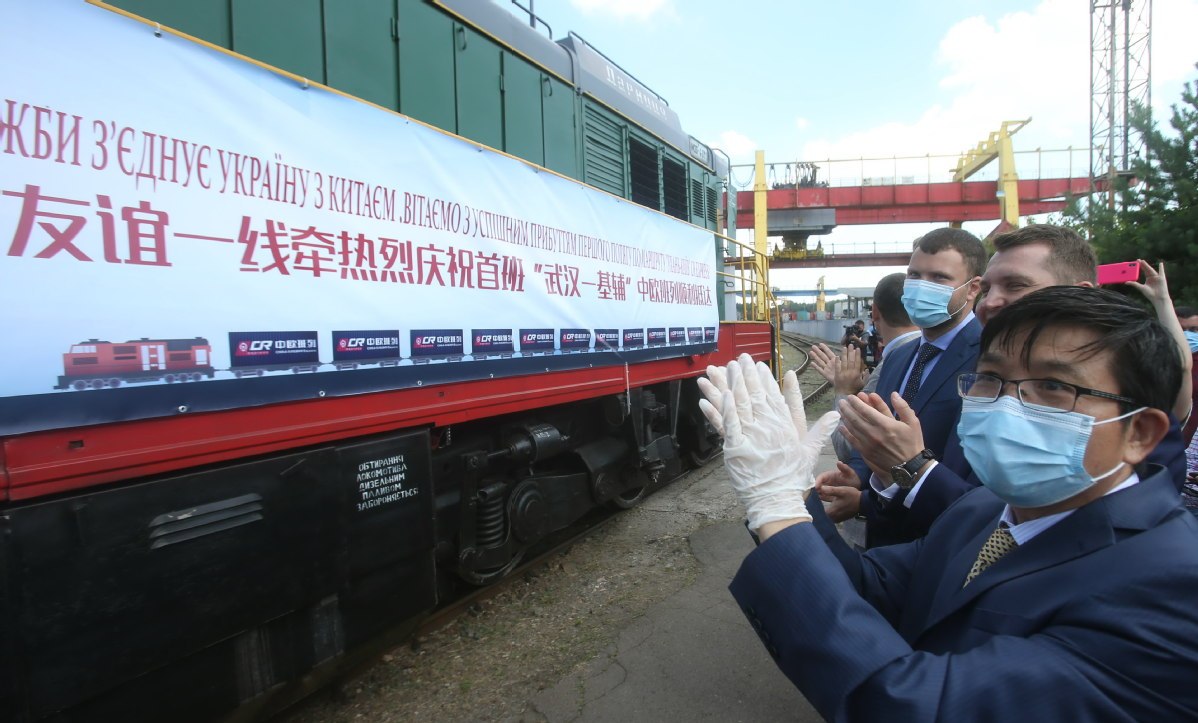 Representatives from China and Ukraine welcome the first freight train from Wuhan, Hubei province, to Kyiv, the capital of Ukraine, in July this year. [Photo/Xinhua]

After years of being a supplemental transport option for China's trade with the European Union and the Eurasian Economic Union, as well as non-EU member states, rail transport－due in part to the COVID-19 pandemic－is on the rise, with the China-Europe freight train service having become a vital trading channel in support of the world's economic recovery this year, said officials and industry experts.

Despite the contagion's destructive impact on the global economy, the pandemic has created opportunities for railway transport, regional economic restructuring and innovative activities in certain parts of the world, said Li Muyuan, secretary-general of the Beijing-based China Container Industry Association.

As many ports in Italy, the Netherlands, Spain and Portugal have temporarily shut or face severe curbs on the movement of people and vessels, container availability had dwindled sharply at major European ports such as Hamburg, Rotterdam and Antwerp in the second quarter. This caused shipping issues for traders in China and Europe alike, said the China Chamber of International Commerce.

Li said freight train services between China and Europe are becoming increasingly popular with importers and exporters on both sides, as commercial activities of shipping companies and airlines remain suspended or restricted due to the pandemic.

The number of journeys made by China-Europe freight trains amounted to 5,122 in the first half, up 36 percent on a yearly basis, breaking the monthly record several times over, according to China State Railway Group Co Ltd, the nation's railway operator.

The China-Europe freight train service was initiated in 2011 and is considered to be a significant part of the Belt and Road Initiative to stimulate trade between China and economies related to the initiative.

Bai Ming, a senior researcher at the China Academy of International Trade and Economic Cooperation in Beijing, said that as the pandemic has caused a global recession－especially for the world's three major economic regions of East Asia, Europe and North America－the China-Europe freight train service to a certain extent has made up for the precipitous drop in maritime and air transport capability between East Asia and Europe so far this year.

Senior officials from China and the European Commission reached common consensus in areas including cooperation in COVID-19 responses and the security of industrial and supply chains.

Negotiations regarding the bilateral Comprehensive Agreement on Investment were held during the eighth China-EU High-Level Trade and Economic Dialogue in late July, and Bai said an early signing of the CAI will further benefit cargo train service between China and Europe during the post-pandemic era.

Moreover, China, Japan and South Korea's push for accelerating negotiations on the China-Japan-South Korea Free Trade Agreement will also see more industrial goods made by China's two neighbors on trains to Europe to support the multilateral trading system and regional trade, said Wei Xiaoquan, a researcher specializing in regional economic development at the University of International Business and Economics in Beijing.

Wei said as these countries are major manufacturing powerhouses and outbound direct investors in Asia, taking advantage of the China-Europe freight train service, bilateral and trilateral FTAs will not only upgrade the level of trade liberalization for cargo, services and investment between them over the long run, but also offer Japanese and South Korean companies more choices on how to ship products.

Because there isn't much capacity for Chinese companies to lease belly-hold cargo space in the passenger aircraft of domestic and European airlines since the outbreak, China Post Group Corp launched regular freight train service to a number of European cities from Southwest China's Chongqing municipality and Yiwu, Zhejiang province, in March and April, respectively.

The centrally administrated State-owned enterprise had operated 22 such transcontinental cargo train trips to Lithuania and Poland as of Aug 2. Some 8,481 metric tons of mail and goods were shipped via 1,303 rail containers in both directions.

Liu Aili, chairman of China Post, said rail lines connecting China and Europe are able to ship a large amount of goods and medical supplies within 10 or 15 days in both directions after a number of countries tightened control of－or closed－their ports and airports, causing delays in the distribution of goods. 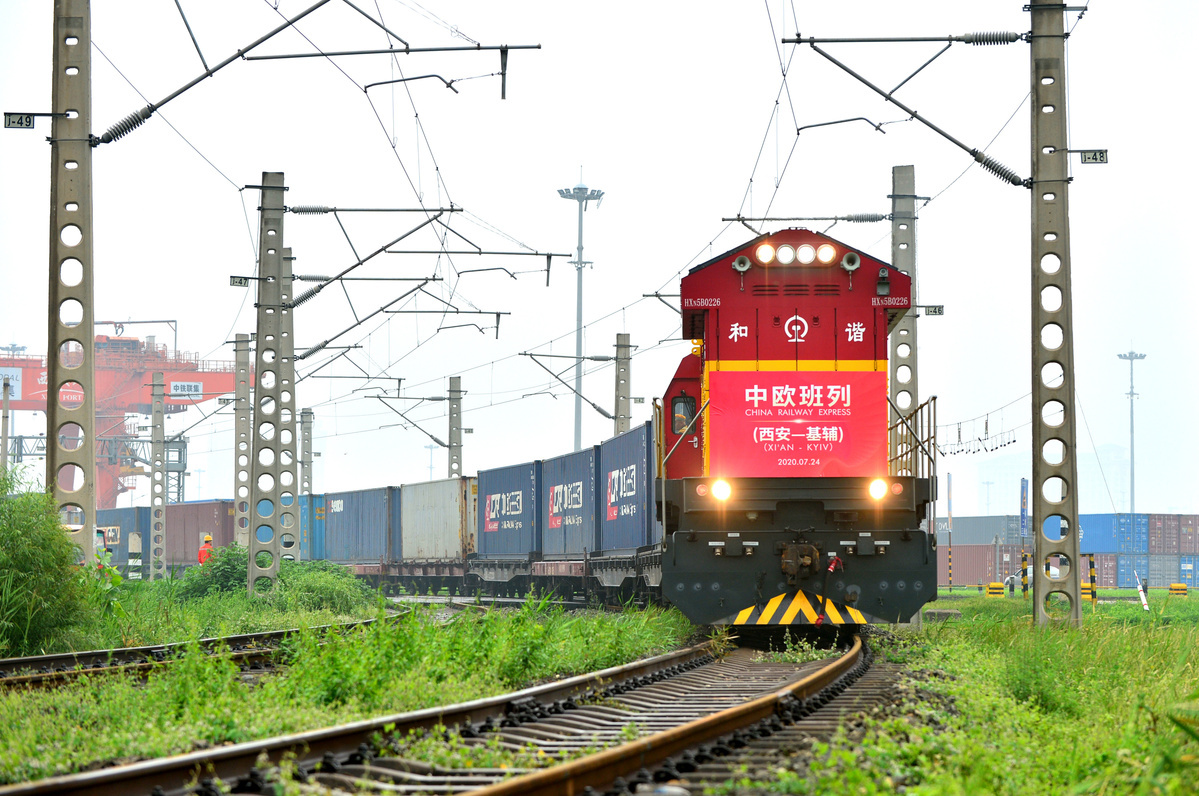 A China Railway Express freight train leaves from Xi'an, Shaanxi province, to Kyiv, the capital of Ukraine, in July this year. [Photo/Xinhua]

The Chinese company has shipped mail and goods to a total of 36 EU and non-EU countries, including Spain, Denmark, France, Cyprus, Switzerland and Norway, via local delivery after its trains arrived at Vilnius, Lithuania.

China Post plans to run rail cargo services on the route once or twice a week in the second half, with 50 rail containers each time, to facilitate China-EU trade activities and offer European countries confidence in resuming production and maintaining stable trade with China.

The pandemic has highlighted the rail services' strategic value in ensuring the global supply chain and the growth of BRI, Liu said.

China Merchants Group, another central SOE, also organized freight train services between Shenyang, Liaoning province, in Northeast China, and European cities such as Hamburg and Duisburg, Germany; Enns, Austria; and Malaszewicze and Warsaw, Poland, in the first half of this year.

The pandemic constraints in several countries prompted the company to come out with "plan B "solutions, such as increasing the frequency of transcontinental train services and ocean-to-rail services to assist domestic exporters as they resume production and exports, said Zhang Yi, general manager of Dalian-based Liaoning Port Group, a subsidiary of China Merchants Group.

Railroad traffic pressure at Alataw Pass, a major rail port in the Xinjiang Uygur autonomous region, and Manzhouli, the largest rail and land port on the China-Russia border, in the Inner Mongolia autonomous region, was eased last month.

Five freight assembly hubs－Zhengzhou, Chongqing, Chengdu, Xi'an and Urumqi－had 4,003 trains with 40 and 50 carriages each in the first half, accounting for 78.15 percent of the total dispatched trains in more than 50 cities in China where China-Europe freight trains operate.

The National Development and Reform Commission said in July that China has allocated 200 million yuan ($28.3 million) from the central budget to support the construction of transportation hubs in these five cities. The work is being undertaken to improve the efficiency of the transportation network for the China-Russia and China-Europe freight train services.

Dang Yingjie, deputy director-general of the National Office of Port Administration at the General Administration of Customs, said the administration will support related parties with surging rail transportation demand by building hubs along rail routes, and will help them carry out cargo grouping operations and domestic and foreign goods sorting and transportation at Customs-supervised operating sites to further optimize operational capacity on the transcontinental railroad.

China will continue to deepen its cooperation with related parties to promote the role of Authorized Economic Operator agreements and other policy tools to boost trade activities between China and Europe via rail, help companies resolve import and export issues and encourage more companies from economies related to the BRI to join AEO certification programs, Dang said.

The program was advocated by the World Customs Organization for strengthening international supply chain security and facilitating movement of goods. Under the program, Customs bureaus from various regions form partnerships to collaboratively reduce barriers to Customs procedures and enhance global trade efficiency.

The GAC said China has signed the largest number of AEO agreements worldwide to facilitate Customs clearance for companies.

The administration announced in early August that China has launched automated railway manifest and transport systems in land ports across the country to further promote paperless operations at railway ports and cut the frequency and cost of Customs declarations.

Feng Hao, a researcher at the NDRC's Institute of Comprehensive Transportation, said although the year 2020 is a period to expand clients for China-Europe freight trains, the market share contributed by these trains in China's trade with Europe accounts for just 1 percent of the total. Therefore, potential can still be explored via market expansion and international cooperation.

After all, a seaborne mega container vessel can now carry up to 20,000 ocean shipping containers on long-distance trips at cheaper rates. Cities in both China and Europe should be aware of this dynamic and adequately arrange their shipping schedules, attract more clients and add more high value-added services to rail routes in the future, Feng said.