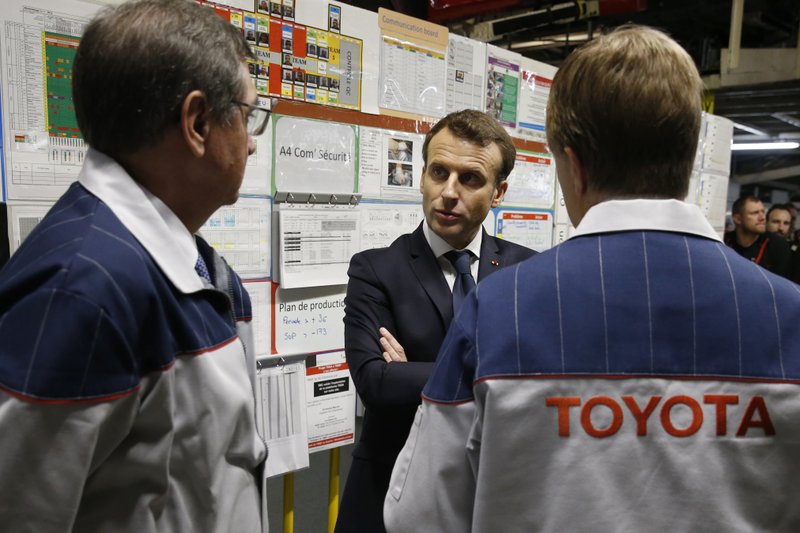 French President Emmanuel Macron promoted his government’s changes to French tax and labor laws Monday in front of 140 world business leaders in a bid to convince them to invest and hire in France.

At the same time, the 40-year-old Macron, elected last May, hopes to persuade the French themselves of the merits of his economic policies.

Macron visited a Toyota plant in northern France before heading to the evening business event at the chateau of Versailles, in the presence of 15 French government ministers.

Several companies seized the occasion to announce investments plans in the country.

German-based SAP software company announced a 2 billion-euro ($ 2.4 billion) investment plan over the next five years, focusing on research and development and supporting startups.

“We kind of forgot this, but the French are very innovative. We must re-awaken this,” Macron told employees during the visit to the factory.

Facebook will invest 10 million euros ($12 million) in its French artificial intelligence center by 2022.

Google will open a new research center in artificial intelligence in Paris in coming weeks. The internet company also confirmed the expansion of its Paris headquarters this year, the number of employees increasing from 700 to 1,000. Google wouldn’t reveal the amount of the investment.

Macron’s office said CEOs or top executives from Google, Facebook, Coca-Cola, HSBC, Goldman Sachs, Samsung and Alibaba were among those attending the meeting.

Business leaders are stopping in France en route to the World Economic Forum in Davos, Switzerland, where Macron will give a speech.

Macron, a centrist who was elected on a pro-European, pro-business platform, argues his economic policies will make France stronger to face globalization.

His labor market measures, perceived by many as weakening France’s hard-won worker protection rights, prompted a series of street protests last year. They are expected to start producing effects in the coming months.

Macron promised to subsequently cut taxes on business revenue by 2022.

During the business event, Prime Minister Edouard Philippe also announced temporary tax cuts for employees sent to France by a non-French employer. In addition, France will set up specialized commercial courts in Paris to allow for the hearing of international law cases, he said.

State statistics agency Insee last month raised its 2017 growth estimate for France to 1.9 percent, the highest in a decade.