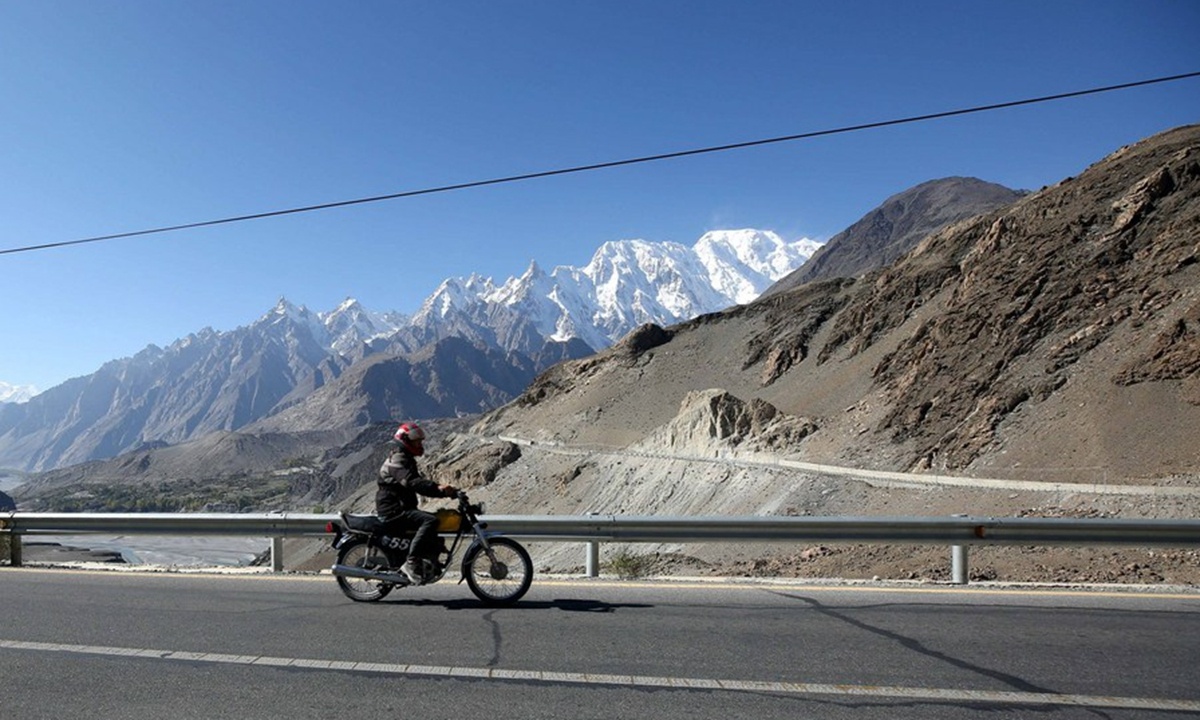 As night falls, the crowded Aliabad bazaar in Pakistan's northern Hunza district is lit up by lights of the shops on a main road, with neon light signs of hotels and restaurants trying to catch people's eyes.

Najeeb Uddin runs a handicraft shop at the major local bazaar. "I took over this shop from my father. We sell traditional Hunza handicrafts including caps featured with feathers, shawls, clothes and jewelry," he said.

The family shop has operated for more than 20 years. "Many of our customers are tourists from Karachi, Islamabad and Rawalpindi," the 23-year-old told Xinhua.

Located in the Gilgit-Baltistan (GB) region, Hunza is near the Karakoram and the Hindu Kush ranges, charming tourists with grand snow-topped mountains, glaciers, scenic valleys and a long history.

It received an increasing number of domestic and foreign visitors over recent years, said Uddin, and it also saw a large number of new shops, restaurants, hotels and guesthouses erected.

"When I opened this food pavilion, there was few women who started their own business. But with the rapid development of tourism, many women now follow the same path to start business," the mother of four children said.

"My business is getting better and better in recent years and the Aliabad bazaar has also been expanded," Uddin said. "None of these can be achieved without the Karakoram Highway (KKH) outside the door, that runs through the whole bazaar, because a good road is a precondition for attracting tourists."

As one of the highest paved roads in the world, the construction of the Karakoram highway from 1966 to 1978 experienced huge difficulties, with hundreds of Chinese and Pakistani workers sacrificing their lives during the construction. The road is also called the China-Pakistan Friendship Highway.

The highway had become over-crowded and dilapidated in decades. In 2008, the China Road and Bridge Corporation (CRBC) started to upgrade and rebuild the 335-km section running between the Raikot bridge and the Khunjerab Pass. The renovation work took seven years to complete, with the Chinese and Pakistani workers overcoming the challenges of earthquakes, landslides and rock-fall in the so-called "Museum of Geohazards" area.

In 2010, a massive landslide happened in Hunza blocking the flow of the Hunza River while burying and inundating parts of the Karakoram highway, creating the Attabad Lake. The upper Hunza's 25,000 inhabitants were cut off, with boats becoming the only transport means.

To solve this problem, the CRBC decided to realign the Karakoram highway and managed to build five tunnels of seven kilometers in total length in the mountains.

The Attabad Lake, once a big trouble for travels and logistics, has now become a major tourist attraction. There are rowing boats, motorboats and other recreational facilities on the lake and many hotels have been built by the lake.

"In my eyes, the KKH is the eighth wonder of the world, because it was built in an area where the geological condition and topography are so complex. In many areas of Pakistan's north, the roads are very bumpy, but the KKH enables the tourists to have a pleasant journey and enjoy the beautiful scenery along the road," Irfan Naseer, manager of lakeside hotel Luxus Hunza told Xinhua.

"The KKH has greatly facilitated the development of tourism industry in Hunza," Naseer added.

"Although October is already in off-season, the beautiful colors of yellow, red and green in Hunza valley still attract many tourists. All of our 24 rooms are occupied every day recently," he said.

"Next year, we plan to build six more rooms, because we have confidence in the future of the tourism industry here," said the hotel manager.

Speaking to Xinhua, Faizullah Firak, spokesperson of the Gilgit-Baltistan government, said, "The KKH is the backbone of GB's tourism ... domestic tourism in GB started after the construction of the KKH. Many foreign tourists who came to GB praised the KKH and in their suggestions to the GB government, they advised to build more roads like the KKH."

Serving as the main artery, the highway is also vital for shipping the local farm produce like apples, apricots, cherries, potatoes and dry fruits, according to the spokesperson. "The road is the most important means of earning bread and butter, for the people of the area."

At the end of July, the Havelian-Thakot section of the Karakoram highway, again built by the CRBC and run as a CPEC project, was officially opened for traffic, extending the highway further southward.

With the CPEC bringing further benefits to Pakistan, Hunza's road to prosperity will become wider and smoother.