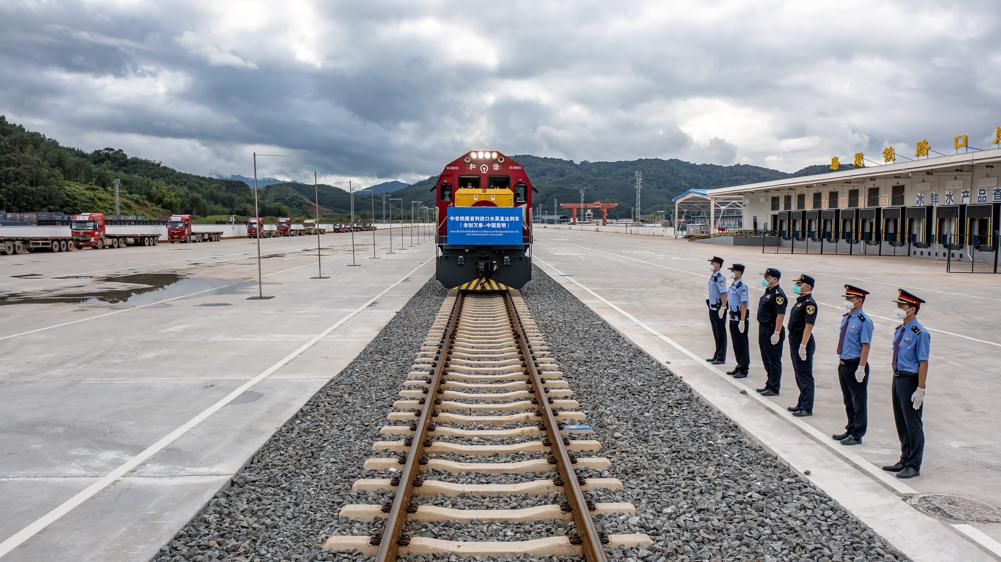 A freight train from Laos to China loaded with 25 standard shipping containers of fruit arrives at Mohan Railway Station from Mohan Railway Port in Yunnan province on Saturday. (Photo by Chen Chang/for chinadaily.com.cn)

CHONGQING/CHENGDU -- A train loaded with fresh fruits arrived in Chengdu, capital of Sichuan province, via the China-Laos Railway on Wednesday, and another arrived in Chongqing municipality on Thursday. They were the first deliveries of imported fruits via the railway to the two cities.

Each loaded with 25 cold-chain containers, the two trains shipped over 1,300 tonnes of fruits -- longans, bananas and other fruits from Thailand and Laos. The train bound for Chengdu traveled for four days and the other journeyed six days, both significantly cutting time costs for Chinese fruit distributors.

"This time, we imported 25 containers of longans to Chengdu. It used to take over 10 days by sea. Thanks to the China-Laos Railway, we are saving on logistics times and our costs have been reduced by 30 percent," said Ai Zhonghua, executive director of Chongqing Jinguoyuan Industrial Co Ltd, which imported over 70,000 tonnes of Thai longans last year.

"The China-Laos Railway provides a new logistics choice for foreign trade in the fruit sector. It improves the efficiency and effectiveness of our international supply chain," said Peng He, deputy general manager of the company, which is China's first listed fruit distributor. It imported over 90,000 tonnes of durians in 2021.

The China-Laos Railway, which began operations in December 2021, stretches over 1,000 kilometers, linking Kunming, the capital of Yunnan province, with Vientiane in Laos.