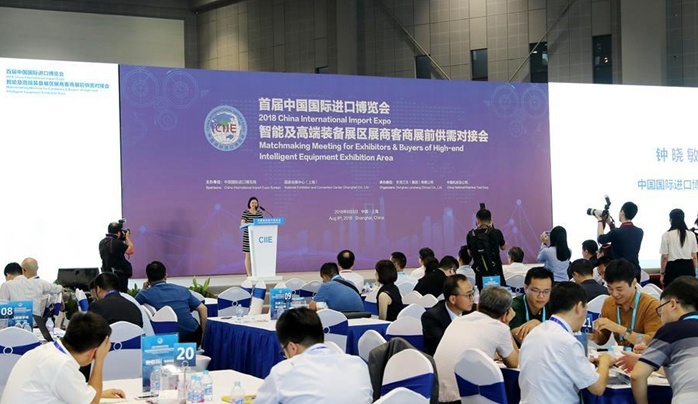 BEIJING, Nov. 13 (Xinhua) -- International exhibitors of the just-concluded China International Import Expo (CIIE), the world's first import-themed national-level expo, were delighted with the fruitful results they have reaped in China.

Praising the trailblazing event that demonstrates China's determination to further open up, share opportunities and promote cooperation, the exhibitors express their expectations for the next expo in 2019.

Deals for intended one-year purchases of goods and services worth a total of 57.83 billion U.S. dollars were reached at the six-day event held in Shanghai. With fruitful achievements, international exhibitors have also gained a deeper understanding about the Chinese market.

Rolls-Royce, a British maker of aircraft engines, signed an engine and maintenance agreement worth 10.13 billion yuan (about 1.45 billion U.S. dollars) with China's Eastern Airlines at the CIIE.

"We are very delighted to sign the agreement with China's Eastern Airlines on such a significant occasion," said Paul Freestone, senior vice president of customers of the company.

Noella Ferns, executive vice president for Greater China and the Philippines of British Airways (BA), said as a representative enterprise from Britain, BA exquisitely designed its novel exhibition stand, which offered rich interactive experience to spectators and provided them with a better understanding of China's market.

"For the travel segment, we are optimistic about the Chinese market continuing to present great opportunities for British Airways," said Ferns.

ZF Friedrichshafen AG, a famed car parts maker headquartered in Germany, conducted extensive exchanges and signed agreements with its corporate customers in China to strengthen their cooperation in fields of intelligent drive and electric-powered systems.

Singaporean exhibitors were also satisfied with what they have received at the CIIE. Teo Siong Seng, chairman of the Singapore Business Federation, said at least 10 exhibitors from Singapore had signed cooperative agreements with Chinese enterprises.

Costas Kadis, agriculture minister of Cyprus, expressed the readiness to participate in the expo in 2019, after his country signed a protocol on export of Cypriot dairy products with China at the expo.

For Cypriot, China is a market with great potential, Kadis said, adding that they will definitely take part in the expo in 2019.

China is also a large market for American Ginseng and Marathon Ginseng, a U.S. Wisconsin-based ginseng grower aiming to further explore the market through the CIIE.

Jiang Mingtao, founder of Marathon Ginseng, said the expo helped him make the acquaintance of numerous new sellers and customers and learn more about the demands of the Chinese market.

Many exhibitors have been eagerly planning further cooperation with China.

Representatives from Hyundai Motor Company believed the CIIE will promote communications between South Korea and China in the field of automobile and the expo is going to become a new platform to lead the trend of the industry.

The CIIE provided Chinese customers with opportunities to learn about and use innovative and unique imported products, said Cann Song, China country manager of Beko, a Turkish home appliance and consumer electronics brand.

The achievements made by the exhibitors were derived from their willingness to explore the Chinese market and embodied their appreciation for China's practical move to broaden its opening-up, uphold free trade and support multilateralism.

The CIIE shows China's determination to open its market and creates broader space for cooperation between China and other countries, said Georg Zanger, president of the Austrian Chinese Business Association.

The expo is not just a major step taken by China to deepen its reform and opening-up, said Zhang Ting, spokeswoman of Panasonic's Chinese branch.

It also leads to a new era of global exchanges and cooperation, Zhang added.

The organizer's efficiency in the expo deeply impressed the exhibitors and contributed to the success of the expo.

As a large-scale event, the organization of the expo is rigorous and very successful, Teo said.

Luiz Alberto Ferla, founder and CEO of DOT digital group from Brazil, also expressed his satisfaction with the organization of the expo, saying the CIIE is a grand fair with abundant exhibits and masses of spectators.

Overseas media regard the CIIE as a public good provided by China for the world economy and a platform for global economies to complement each other.

The display of new products and technologies at the CIIE will promote the integration and interaction of different countries' economies and unleash the potential for development. Even though the expo was concluded, China will never stop its opening-up process and is going to continue sharing its opportunities with the world, commented Nouvelles d'Europe, a Paris-based newspaper.