FTSE inclusion could herald rising trend for A shares: analysts

China's stock market rebounded on Wednesday, which experts said was mostly due to market expectations that FTSE Russell will soon include A shares in its indexes. MSCI Inc has also said it might increase the weighting of A shares in some of its indexes. 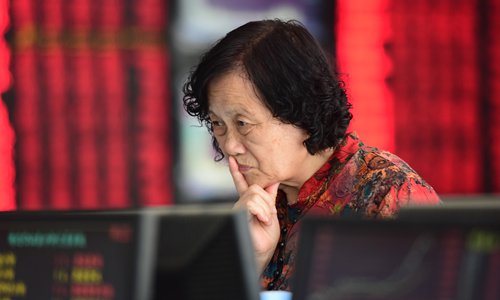 Mainland stocks are also expected to benefit from domestic industrial capital re-entering the market.The two main domestic markets saw notable gains on Wednesday morning. The Shanghai Composite Index rose by 1.27 percent to 2,816.43 points, while the Shenzhen Component Index edged up by 0.91 percent to 8,429.73 points. The two bourses corrected a little in the afternoon session. The Shanghai market closed at 2,806.81 points, up by 0.92 percent, while the Shenzhen market edged up by 0.8 percent to 8,420.54 points.There has been a rebound in the market since last week when the Shanghai market rose on September 18 and 19, followed by a 2.5 percent gain on Friday."This is not just a random, temporary rebound. This is a formal market reversal, the start of a long-term upswing," Li Daxiao, chief economist at Shenzhen-based Yingda Securities, told the Global Times on Wednesday. A shares have been bogged down in a bearish market for several years, with the Shanghai market slipping from a peak of more than 5,000 points in mid-2015. The declining trend has deepened in recent months, with the markets reacting to external factors such as the worsening trade dispute between the US and China."The influence of the trade dispute has already been absorbed by the stock market in the recent months. Now the market won't react to the trade situation as much as it did when the dispute first started," Li said. International interest Shao Yu, chief economist at Shanghai-based Oriental Securities, said that the increasing interest in A shares among overseas index companies is a major reason for the market rebound. US-based MSCI announced on Tuesday it will launch a consultation on a further weight increase for A shares in its indexes, including increasing the inclusion factor of MSCI China A Large Cap securities from 5 percent to 20 percent of their respective free float adjusted market capitalizations."This shows that the total scale of global passive funds that allocate A shares is rising rapidly," Shao told the Global Times on Wednesday.FTSE Russell, a British provider of stock market indexes, is set to announce its decision about including A shares in its indexes on Thursday. "Overseas investment capital is inclined toward consumption shares or sustainable shares. This in turn leads to continuous capital inflows and an increase in valuations in the relevant sectors," Shao said. Xie Yaxuan, a securities analyst at China Merchants Securities, also wrote in a note on Wednesday morning that the general market expectation is that A shares will be included by FTSE Russell, and will have a bigger weighting compared with MSCI. Domestic factors, such as the rising business performance of listed companies and the entrance of domestic industrial capital into the A-share market, have also led to the rally, experts told the Global Times.A report by Securities Daily on Wednesday showed that about 70 percent of listed companies in the two bourses are expected to have positive news in their third-quarter financial reports.