BUSINESS Future of flight seen through a microscope

Future of flight seen through a microscope 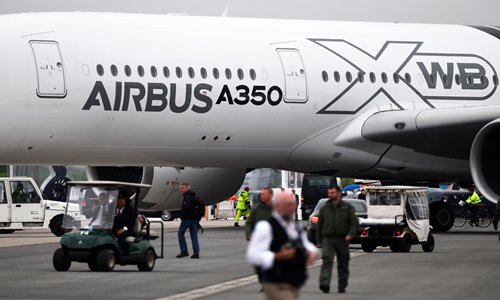 An Airbus A350 XWB is displayed at the International Aerospace Exhibition held in Berlin in April. Photo: IC

The dream of flight has evolved from wood and metal to modern composite aircraft. Now, Airbus and Chinese scientists are aiming to revolutionize aviation with super-tiny nano-materials.

"Airbus and the top Chinese scientific research institutions are combining the needs of the industry with the most cutting-edge technologies," he said.

ABEC and the National Center for Nanoscience and Technology of China (NCNST) recently announced the establishment of a joint laboratory in Beijing to explore the engineering applications of nanoscience in the aeronautics industry.

"We've always aimed for lightweight and safe transport vehicles. We should focus too on energy conservation and environmental protection," said Fan Shoushan, academician at the Chinese Academy of Sciences and professor at Tsinghua University.

Nanomaterials are materials with at least one dimension down to a nanometer (one-billionth of a meter) in size. They are also called nanoscale materials.

Nanotechnology is an emerging technology that began to draw worldwide attention in the early 1990s.

Over the past 20 years, China has become a vital force in global nano-research, with studies leading to many advanced technologies.

"Combining scientific research and industry is a good way to create a new generation of materials," Fan said.

"Only the industry itself knows what it really needs in the future, and the scientific research community knows where they are heading." he said.

Over the last century, technology advances in aerodynamics and materials have been a catalyst for driving the aviation progress and even intergenerational development.

For example, carbon fiber composites that emerged in the 1960s are now regarded as a common feature of modern aircraft.

"Carbon fiber composites account for up to 53 percent of the weight and more than 80 percent of the volume of Airbus' latest wide-body passenger aircraft, the A350XWB," Tran Van said.

"The addition of carbon fiber composites makes aircraft lighter and helps achieve more pleasant humidity and pressure environment, as well as a substantive leap in economic efficiency and comfort," said Zhang Zhong, ABEC researcher and director of the joint lab.

Research shows nano-particles can effectively improve the interfacial properties of carbon fiber and polymer materials, significantly enhancing the performance of the entire structure.

The carbon fibers are 7 to 8 microns in diameter, but their interface is submicron or nanometer in diameter.

The research will focus on four fields: improving the toughness of composites; enhancing the electrical conductivity of carbon fiber composites; leveraging composites to give intelligent materials self-healing and other capabilities; and applying nanomaterials to develop acquisition sensors for "health monitoring" of the aircraft structure.

The researchers will try to find the "magic" characteristics of nanomaterials for the aviation industry.

For example, composites could damage fiber and interfaces during operation and processing, which is likely to put aircraft safety at risk.

"Through nano-modification, the body of polymer materials can effectively improve its interfacial properties, resulting in enhanced composite properties," Zhang said.

The conductivity of carbon fiber composites is another major issue. For instance, the covering of copper mesh increases the weight of composites, but carbon nanotube as a film in composites can resist lightning strikes.

"We are still exploring self-repairing intelligent materials that can be prepared in micro-capsules," Zhang said.

The material of micro-capsules can self-repair the entire composite system after damage or scratches to improve mechanical and other properties.

The team is also exploring the development of nanomaterial sensors, and distributing these extremely tiny sensor arrays on the structure surface of the composite aircraft, allowing for the self-health check and healing of the aircraft.