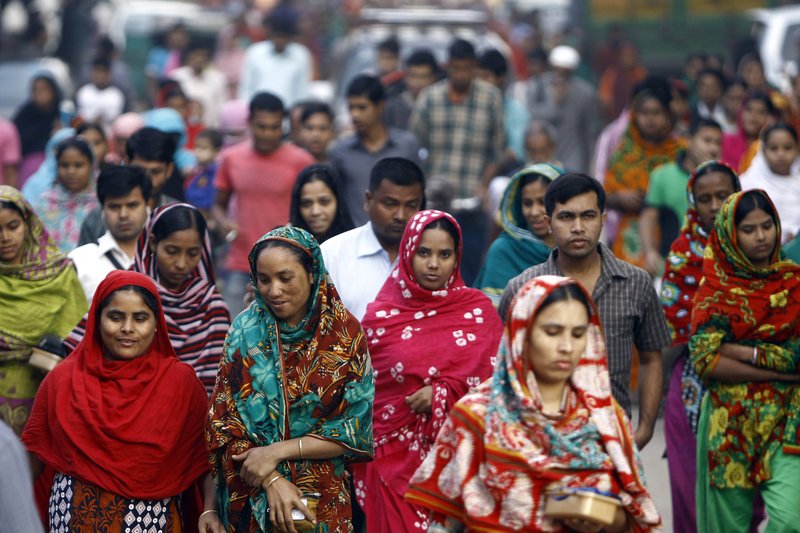 A survey of factory owners in Bangladesh found that major fashion retailers that are closing shops and laying off workers in Europe and the US are also canceling their sometimes already completed orders, as workers often go unpaid.

A report released Friday by Mark Anner, director of Pennsylvania State University’s Center for Global Workers’ Rights, says the coronavirus crisis has resulted in millions of factory workers, mostly women from rural areas, being sent home without the wages or severance pay they are owed.

About 4.1 million people work in apparel factories in Bangladesh, the world’s No. 2 garment exporter after China. The South Asian country is just beginning to feel the direct impact of the pandemic. But the shocks to its export markets have been cascading into its economy for weeks.

The disruptions from the virus outbreak are straining a fragile supply chain in which big buyers have been squeezing their suppliers for years. The government, having offered huge tax incentives to entice manufacturers and buyers to move to Bangladesh, has scant resources to help protect workers.

More than 1 million garment workers in Bangladesh already have lost their jobs or have been furloughed because of order cancellations and the failure of buyers to pay for canceled shipments. Nearly 60% of the 316 factories that responded to the survey by the Center for Global Workers’ Rights and the Worker Rights Consortium, a Washington, D.C.-based labor rights organization, said they had already closed down most of their production.

About 6% of factories have had all orders canceled due to the outbreak, while nearly 46% said they have lost a big share of their orders.

It found nearly all buyers refused to contribute to wages for those workers, and more than 70% of those furloughed were sent home without pay. Of the workers who were fired, less than 20% were given severance pay, the survey found.

Anner and other labor experts say the big fashion retailers are resorting to “force majeure” clauses in their contracts — usually used in case of natural disasters or war — to justify not paying manufacturers that have already paid for fabric and other materials and labor to make the orders. Earlier, suppliers were being penalized for late deliveries resulting from difficulties obtaining fabric or other materials due to factory shutdowns and other disruptions caused by the virus outbreak that originated in the central Chinese city of Wuhan.

Factory owners are unlikely to fight back out of fear they might lose future business once the crisis passes.

The virus outbreak “is showing us just how extreme that power imbalance is,” Anner said. “It’s just an absolute disaster.”

The damage is not limited to the garments sector. The International Labor Organization has estimated that 25 million jobs may be lost due to the virus outbreak.

Bangladesh, a nation of 160 million, is deploying soldiers and police to enforce a nationwide 10-day shutdown to slow the spread of the coronavirus in the densely populated country. But in an indication of the importance of the garment sector, which provides 80% of the country’s export earnings, those factories have been deemed an essential industry.

Kalpona Akter, executive director of the Bangladesh Center for Workers Solidarity group, blasted buyers for canceling orders. “The workers are panicked,” she told The Associated Press.

“We have a cruel reality here. Simply, they will go hungry, their families will suffer, their children, their parents will suffer for lack of food, medicine. The global brands will lose a fraction of their profit, the owners will also lose their share, but the workers will be left without food and medicine,” Akter said.

The Bangladesh Garment Manufacturers and Exporters Association said that as of Friday orders worth about $2.7 billion had been canceled or suspended, directly affecting nearly 2 million workers.

In a video message, its president, Rubana Huq, urged global buyers including H&M and Wal-Mart to not cancel orders and to accept those already finished or under production.

“We will have 4.1 million workers literally going hungry if we don’t all step up to a commitment to the welfare of the workers,” Huq said.

“One thing is very clear, our foremost responsibility was towards our workers. We are a manufacturing country, our reality and your reality is totally different, but it is not a time to point out differences, it’s a time through which we need to work together,” she said.

“We appreciate the announcement of the prime minister. This is a very good gesture, but I want to say very humbly that it’s very tiny, very small,” said S.M. Khaled, managing director of Snowtex Group.

Khaled said his main factory, which employs nearly 10,000 workers, is still running but might have to stop if more orders are canceled.

“We have imported fabrics and other necessary products for making garments. Now there is a huge backlog,” Khaled said. “How will we survive?”