A report by the Jiangsu provincial government on economic development says that GDP in the region reached 9.26 trillion yuan last year (1.37 trillion U.S. dollars), up 6.7 percent from the previous year. 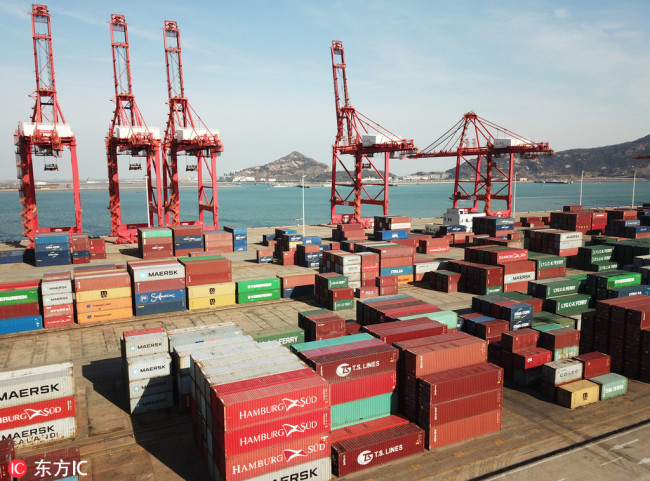 Stacks of containers to be shipped abroad at Lianyungang Port in Jiangsu Province. (Photo: IC)

The report was welcome news for Jiangsu, which was facing an economic slump before President Xi Jinping provided guidance to local lawmakers during a visit in 2013. He said that Jiangsu should deepen its industrial reforms and establish a new system to foster the development of modern industries.

In response to the guidance from President Xi, over 600 projects to upgrade the manufacturing sector were developed by the provincial government. These projects have a combined value of around 150 billion yuan (22 billion US dollars). As a result of this investment, many workshops in Jiangsu have been kitted out with the latest cutting-edge technologies, which have given a boost to their efficiency.

"We can control the manufacturing processes of the whole workshop through an app on a phone, thanks to AI technology," said Li Long, the deputy manager of a local manufacturer. "Now, our work efficiency is up 50 percent and we've raised our [First Yield Pass] rate from 10 percent to 90 percent."

In the meantime, the provincial government had been delivering favorable policies to emerging industries over the past five years. The result has been that more than 200 research and development institutions have been established in the city of Nanjing, and nearly 40 outdated enterprises in one chemical industry park have been shut down in the city of Zhangjiagang.

"We have reorganized the chemical industry park into a more modern and environment-friendly place based on President Xi's words," said Shen Lin, the local CPC Committee secretary.

The development of emerging industries in Jiangsu has added to the province's economic growth, which has been steady at around 10 percent a year since 2013. Qi Biao, the deputy director of the Jiangsu Provincial Development and Reform Commission, says Jiangsu will continue to restructure local industries and push them up the global value chain.

Another economic achievement by the province was its successful efforts to increase the rate of urbanization. This has contributed to the modernization of Jiangsu's agricultural industry by gathering together scattered villagers. And this year, Jiangsu rolled out a three-year plan to improve the living conditions of more than 30,000 villagers.

"We should synchronize the development of public infrastructure with economic development, so that villagers can enjoy the benefits of development," said Zhou Lan, the director of the Housing and Urban-rural Development Department of Jiangsu.