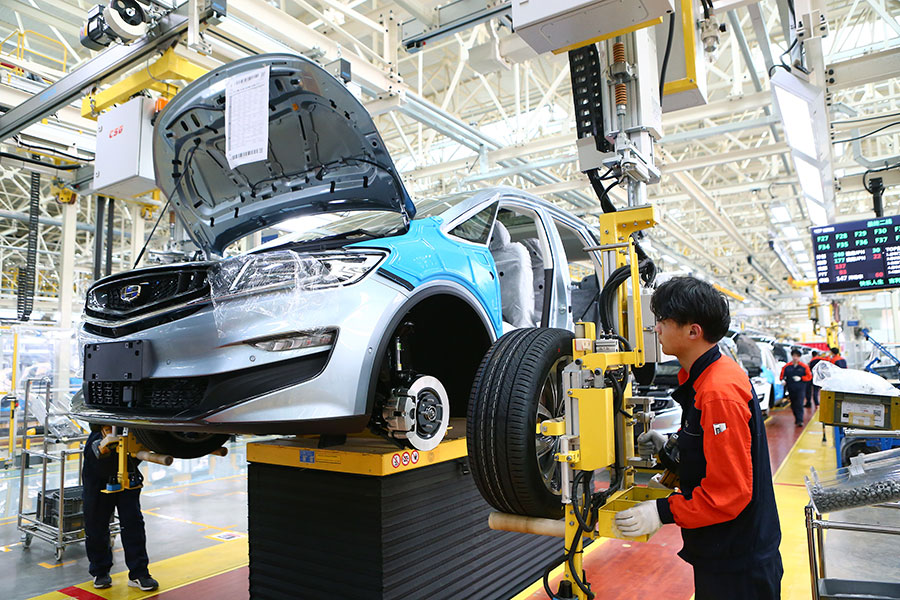 A technician works at a production line of Geely Auto Group in Guiyang, capital of Guizhou province. (Photo: China Daily)

Shanghai Maple Guorun, a subsidiary of Geely, will form a 50-50 joint venture with LG Chem in China with a registered capital of $188 million to manufacture and sell batteries for new energy vehicles, said the carmaker in a statement.

Construction of the joint venture will kick off later this year. When completed by the end of 2021, it is expected to have an annual production capacity of 10 GWh, and the batteries would be installed on Geely's vehicles from 2022, said Reuters citing LG Chem.

Geely President and CEO An Conghui said: "The signing of this joint venture agreement with LG Chem further strengthens our position as a leader in new energy vehicles, where we aim to create more value and better ownership experience for our consumers."

The carmaker is planning to launch more than 30 electrified vehicles including hybrids and pure electric vehicles in the next two years.

This is part of its ambitious electrification plan called Blue Geely Initiative released in late 2015.

According to the plan, Geely aims for 90 percent of its sales to come from electrified vehicles－including mild hybrids, plug-in hybrids and pure electric vehicles－starting from 2020.

In the first five months of this year Geely's electrified vehicle sales totaled 41,615. In May, the sales stood at 10,115, representing a 25 percent increase from the same month last year.

The carmaker launched a pure electric vehicle brand called Geometry in April 2019 and the first model under the brand, Geometry A, has hit the market.

An said Geely has already established a strong supply chain network for the production and development of new energy vehicles.

In terms of batteries, it set up a 1 billion yuan ($145 million) joint venture in December 2018 with China's largest power battery maker CATL to produce batteries for its vehicles.

CATL has similar joint ventures with several other Chinese companies as well, including the country's largest carmaker by sales SAIC Motor Group.

China overtook the United States as the world's largest new energy vehicle market in 2015, and the sales have seen a rising trajectory so far.

Sales of pure electric vehicles and plug-in hybrids are expected to reach at least 1.6 million this year, up from 1.2 million from 2018, according to the China Association of Automobile Manufacturers.

CAAM statistics show that sales in the first five months totaled 464,000 in China, up 41.5 percent year-on-year. New energy vehicles were the only segment that saw sales growth in the country this year in the period despite a 11-month fall in the overall automotive market since July 2018.